This article, written by Paul Ladouceur, is taken from the July 11, 2022 edition of “The Moscow Times”:   https://www.themoscowtimes.com

It originally appeared on the website of “Public Orthodoxy”:       https://publicorthodoxy.org

“Manifest Destiny” was the 19th-century belief that the expansion of the United States throughout the North American continent was God-given and therefore justified and inevitable, no matter the cost to others. This has sometimes come to presume an American sphere of influence throughout the world.

“Russky Mir” means literally “Russian World” – the belief that Russia has a certain God-given sphere of territory and influence which likewise is justified and inevitable, no matter the cost to others. How this played out during the Communist era is explained below.

Note that this has been a one-way fight: Ukraine has not responded in a similar way in Russian territory.

Italics are mine, to emphasize that the Russians have not spared even their own churches.

A top Ukrainian official said that Russian troops have destroyed 43 religious buildings in Donetsk [population 918,000], most of which belonged to the Ukrainian Orthodox Church of the Moscow Patriarchate, since the war began on February 24.”   (from Business Times June 6 2022) 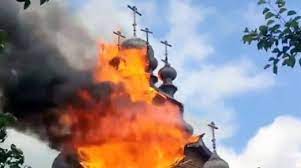 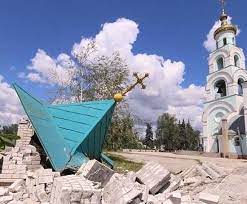 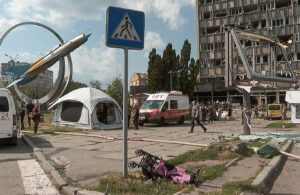 Several times Russian church and state leaders have been enraptured by the idea that the Russian people and its political expression have a special mission or “manifest destiny” to accomplish. Successive iterations of this “Russian idea” reflect a growing convergence of religion, ethnicity, and nationalism with state power into an explosive secular ideology bent on imposing its worldview within Russia, surrounding countries, the Orthodox Church, and worldwide.

The first iteration became prominent after the union Council of Ferrera between the Roman and the Orthodox Churches in 1439 and the fall of Constantinople to the Turks in 1453. These two events precipitated the emergence of a sense of the role and responsibility of Muscovy as the spiritual and geo-political center of Orthodoxy, captured in the epithet the “Third Rome”: the first Rome had fallen into heresy and schism with the filioque and the papacy; Constantinople, the Second Rome, deviated from Orthodoxy by union with Latins and came under Turkish rule as a divine punishment, thereby losing its claim to pre-eminence in Orthodoxy. Muscovy, having rejected the union with Rome and freed itself from the Mongols, thus became the Third Rome of Christendom. The self-proclamation of the autocephaly of the Russian Church in 1448 and the election of the first patriarch of Moscow 1589 reinforced the Third Rome theory.

Although the idea of Muscovy as the Third Rome was not a dominant theme in subsequent centuries, it still featured in more traditionalist Russian circles; the Russian Church emphasized the universal nature of the Church over its particular ethnic or national expressions. But the rise of nationalism in the 19th century assaulted this universalist perspective, and the idea of a messianic role for Russia and the Russian Church resurfaced dramatically, captured in the epithet “Holy Russia”: the divinely-endowed destiny of Russia founded on the preservation and expansion of Orthodoxy, under the guidance of the twin institutions, the monarchy and the Russian Orthodox Church.

In this vision, the tsar was expected to be “an apostle-like ruler,” with St. Vladimir as the prototype, leading his people to Christianity. This required the Church to support autocracy, which it did faithfully until the revolution. The Holy Russia theme was marked by key public events manifesting the union of ruler, church, and people: the 900th anniversary of the baptism of Rus, celebrated in Kyiv in 1888; the 500th anniversary of the death of St. Sergius in 1892; the canonization of St. Seraphim of Sarov in 1903.

A more political variation of the Holy Russia theme was the imperial motto “Orthodoxy, Autocracy and Nationality,“ and its later mutation “Faith, Tsar and Fatherland.” These socio-political motifs marked a departure from ecclesiological universalism, towards an identification of Orthodoxy with Russian nationalism and the imperial state, an “Orthodox patriotism,” seen as an alternative to modern secular nationalism.

The third manifestation, perhaps surprisingly, was the communist vision of an ideal socialist society. As an atheistic philosophy, communism might appear far removed from the religious and Orthodox content of the Third Rome and Holy Russia, but communism is often considered a secular, atheistic religion, with its inspired founders, sacred books, saints worthy of veneration, and rituals; an abstract “humanity” compensated for the previous theistic content of the Russian idea.

Russian Marxists saw their mission in much the same way as their Orthodox predecessors: to imbue all Russian society with their socio-political vision, and, beyond Russia itself, to neighboring lands, beginning with those which were part of the Russian Empire in 1914. The Red Army imposed Bolshevik rule throughout the collapsed Empire; forcible reinsertion into the Soviet Union was successful in Ukraine, Belorussia, Georgia, Central Asia, and Siberia (but failed in Finland and the Baltic States).

In the interwar period, the universal application of Marxist philosophy was visible in the activities of the Communist International (Comintern or Third International), established to promote world communism, headed by the Soviet Union.

After nearly collapsing from the assault of Hitler’s armies in the opening phase during World War II, the Soviet Union gained the upper hand on the battlefield as the Red Army marched through territories initially conquered by the Germans, then into neighboring countries to the West, all the way to Berlin, allowing the Soviets to impose communist-led governments throughout Eastern Europe—only Finland escaped. Flushed with its military, geopolitical and diplomatic successes in the war and immediately afterwards, the Soviet Union attempted to extend its tentacles even further, into Western Europe (where it was stopped by the formation of NATO), Latin America, and Africa, with some success.

This dismal history highlights Russian-dominated communist universalist ideology as a secular variation of the “Russian idea,” that the Russian people and its political expression have a special mission to bring their vision of the future of humanity to the entire world. Here, this mission is not divinely-ordained, but self-appointed, at best dictated by an imperative arising from humanity itself – however inhuman its actual implementation was.

The downfall of communism and the dissolution of the Soviet Union left an existential and ideological void: Russia no longer had a self-identity, a national purpose, an imperative world role. It was in this void that the “Russian idea” resurfaced in its earlier theistic and specifically Orthodox iterations of the Third Rome and Holy Russia. The Russky mir (Russian world) ideology, articulated by senior church officials, aims at extending the worldwide influence of both Russia and the Russian Orthodox Church. The contours of the Russky mir doctrine were spelled out in an address by Patriarch Kirill on 3 November 2009 at the Third Assembly of the Russkii Mir Foundation; Kirill mentioned God only three times and Christ not at all, while repeating 38 times the phrase Russky mir. The contours of Russky mir ideology and its theological weaknesses are well known.

But there are important nuances among these iterations, the acquisition of increasingly dangerous mutations, especially with the expansion of state power. The Third Rome concept was largely ecclesial, and only loosely connected with the pre-modern state. The Holy Russia concept had a more political connotation, a unity of church and state to promote internal cohesion in an increasingly fragmented and restless empire, in a desperate attempt to hold back the forces of modernity; still, the notion was basically inward-looking. Although Holy Russia retained a powerful religious component, nationalism and autocracy were equally prominent ideological features. 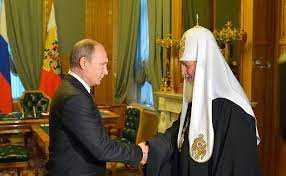 Under the Russky mir banner, Putin and Kirill are instilling into the Russian soul anti-Christian values far more successfully than Lenin and Stalin ever did, the cultivation of profound hatred, aggressiveness and violence against all enemies — those who refuse to submit to the personal and geopolitical ambitions of the Russian State and Church.

The communist version of a special Russian mission stripped away its previously religious content, replacing it with secular, atheistic and humanist philosophy. The full force of this universalist philosophy was felt after World War II, as the Soviet Union expanded its power and control over the lands newly-incorporated into the Soviet Union, Eastern Europe, and worldwide.

The notion of a divinely-appointed mission of the Russian people and the Russian State is thus deeply engrained in Russian consciousness, and it did not require much effort on the part of Patriarch Kirill and Vladimir Putin to re-awaken it in support of the ambition of the Russian Church to dominate world Orthodoxy, and of Vladimir Putin’s personal and geopolitical ambitions, especially the restoration of Russia’s territorial limits to those of the former Soviet Union. In practice in official state discourse, the religious component of Russky mir is decidedly secondary, far behind naked Russian nationalism and expansionism.

In this final mutation of the Russian idea, its promoters have learned from the Bolshevik consolidation of power after the Revolution and from World War II that persuasion and propaganda are of little use in spreading their ideas and ideology, that the only truly effective way is the use of force, brute, unrestrained military force.

Under the Russky mir banner, Putin and Kirill are instilling into the Russian soul anti-Christian values far more successfully than Lenin and Stalin ever did, the cultivation of profound hatred, aggressiveness and violence against all enemies — those who refuse to submit to the personal and geopolitical ambitions of the Russian State and Church. Whether Russia or Ukraine “wins” the war, one thing is certain: Putin and Kirill are fostering something very ugly in the Russian spirit, a spirit of ethno-nationalist hostility, aggressiveness, and violence, transparent under a thin veneer of Orthodoxy. Relaying aggressive state propaganda has replaced the Gospel as the prime message of the Russian Church. Even after Putin and Kirill are gone, Orthodoxy and the world will likely have to deal with this ugliness for long decades.

In the mid-19th century, popular imagination in the United States was captivated by the idea that it was American manifest destiny to expand westward across the Great Plains and the Rocky Mountains, to the Pacific. Russky Mir is Russia’s manifest destiny with its call to Russian domination under president and patriarch in Orthodoxy, Europe and the world, the latest and least Christian iteration of the “Russian idea.” Ukraine is the first major victim of this manifest destiny.

Next Week: Do you know these eight saints? Saint Olaf of Norway and The Seven Maccabees

The following two weeks: I just realized that I have not taken a break from this weekly Blog for over 5 1/2 years! Therefore in preparation for the great feast of the Dormition of the Theotokos, I’ll reprint two old Posts on Why do we honor the Mother of God? Because the Bible says so!