I’m Father Bill Olnhausen, retired Pastor Emeritus from Saint Nicholas Antiochian Orthodox Church in Cedarburg, Wisconsin. I’m 83 now, blessedly married to Dianna for over 55 years, with a daughter and a son and three grandchildren, two of them in college now. I was raised in an Ohio country village, attended Bowling Green State University, have a degree in meteorology from University of Wisconsin – Madison, went to Methodist seminary in Evanston, Illinois, and Episcopalian seminary in Manhattan. I was raised Evangelical United Brethren, went Methodist, was an Episcopalian priest for 24 years, and now for 33 years have been an Orthodox priest. For the past 54 years I’ve lived in the far south end of one suburban Milwaukee county. However, I have been in 47 of the Great Fifty and 11 foreign countries. I love Wisconsin and Greece. I’ve had stability, and I’ve been around! God has been good.

About the Blog: I am no professional theologian or scholar. I’m only a “popularizer”, trying to share my love for Jesus Christ, and for Orthodoxy as I have been taught it and experienced it.

I began this Blog in 2017 and had no idea we’d still be going 5 1/2 years later. At first I wanted chiefly to tell you about my experiences with Saint Nicholas and Saint Nektarios, both in Greece and here at home. Somehow we’ve covered a whole lot more than that.

Why the subtitle “Orthodoxy from the Third Coast”? If you go directly to the Blog site – fatherbillsorthodoxblog.com – this is what will pop up: 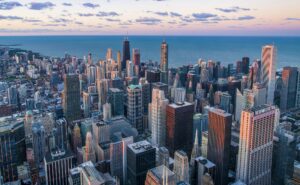 The Third Coast, for any who may not know, is the coast of the Great Lakes. Just for the record, the American Great Lakes coastline is longer than America’s Atlantic Coast, longer than the Pacific Coast of the lower 48. (I’m not bragging. I didn’t carve it out. The glacier did it.) And that’s ignoring a whole lot over on the Canadian side. The part of the Third Coast I’m writing from is in the Upper Midwest. Wisconsin is the yellow state on the far left, and in the southeast if you squint you can see Milwaukee, on the coast of Lake Michigan.

But why “Orthodoxy from the Third Coast”?

Partly because I’ve seen some other Orthodox Blog titles which tell where they come from, and I think it’s really cool.

Because civilization and Orthodoxy are not only on the, um, “lesser” coasts. In fact Chicago has the fourth largest number of Greek Orthodox of any city in the world – coming after only Athens, Melbourne and London.

But chiefly for this reason: Though Orthodoxy is always and everywhere the same in Faith and practice, it also reflects the “feel” of where it takes root. For example, Russian Orthodoxy and Greek Orthodoxy have the same Faith but each with a different ethos – extremely different at this point in history, in a way that is seriously shaking up the Orthodox world. Nevertheless, it’s all the same Faith. American Orthodoxy, as it develops, is likewise taking on its own character – and since the United States is vast, it will also to some extent reflect our different regions. When we started Saint Nicholas Church, Cedarburg, Wisconsin, we said we wanted to be a “Midwestern ethnic Orthodox church”.

What is Midwestern American Orthodoxy? It’s still in process of “becoming”. Certainly it will be multi-ethnic. Despite Chicago, in most parts of the Midwest Orthodox are not numerous, so people, whatever their background, often go to the nearest friendly Orthodox church. Because Saint Nicholas, Cedarburg, is the only Orthodox church on the Milwaukee north shore, it has usually had about 50% converts from many backgrounds and 50% “cradle” Orthodox of various sorts..

Orthodoxy here will pick up on the Third Coast, Upper Midwest “feel” – lots of open space, farms and towns and lakes – but the population of the Third Coast is largely urban/suburban now. That lead picture of the great Chicago skyline facing directly out on the vastness of Lake Michigan seems appropriate.

Orthodoxy here will surely reflect “Upper Midwest nice”. Most folks here are mannerly, kindly, slow to quarrel, concerned about their neighbors, even about strangers. God knows, these nasty days we also have our issues and divisions. (Wisconsin politicians once “got along” and worked together. Not any more.) But, despite all, in person most people here go out of their way to be friendly. Midwestern Orthodoxy will have that open ethos.

Reflecting that, in this Blog I’m trying to be both firmly Orthodox and also charitable, kindly, open. Orthodoxy, after all is the living Tradition – not cold or dead. If I should mistakenly write anything un-Orthodox, uncharitable or nasty, please correct me.

I post this Blog weekly, almost always on Fridays. Since this is often a continuing narrative, Posts are numbered so you can find your way around more easily. You’ll note that to the right of each Post you can locate past Posts.

God bless you all. May He hold you in His hands, and keep you well and safe during these troubled times. May blessed Mary and all the saints protect you.