That was my immediate reaction when I read again the first chapters of Ezekiel, as I prepared this Post. (Please forgive my built-in scientific skepticism. I can’t help it.) So I looked up the date when hallucinogens were first known in the Old World. There’s some evidence that in Egypt it goes ‘way back.

But then I thought we should come at this from another angle: The Lord said, “By their fruits you shall know them.” The prophetic work of Ezekiel was beyond doubt of God. So we’re left with what the Prophet Ezekiel said he saw.

But first: This Blog had an unusually large number of views last week. Apparently you all were hoping to find many comments explaining why Christianity and Eastern Orthodoxy in America are shrinking: We received only a few, though the ones we did receive were very thoughtful – for which let us thank those who commented. Also I have now added some of my reactions to them. If you’re interested, just go back to the Comments section at the end of last week’s Post. 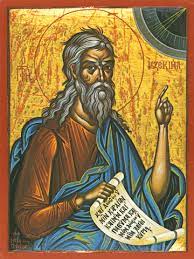 Commemorated on July 21 in the Slavic tradition and July 23 in the Greek tradition.

Icons by permission of Saint Isaac’s Skete at skete.com

From Ezekiel, Chapters One, Two and Three

Now it came to pass in the thirtieth year, in the fourth month, on the fifth day of the month, as I was among the captives by the River Chebar, that the heavens were opened and I saw visions of God…

…behold, a whirlwind was coming out of the north, a great cloud with raging fire engulfing itself; and brightness all around it and radiating out of its midst like the color of amber, out of the midst of the fire. Also from within it the likeness of four living creatures…  they had the likeness of a man. Each one had four faces, and each one had four wings.Their legs straight, and the soles of their feet like the soles of calves’ feet. They sparkled like the color of burnished bronze. The hands of a man were under their wings on their four sides; and each of the four had faces and wings. Their wings touched one another. The creatures did not turn when they went, but each one went straight forward.

This is a choral group of Seventh Day Adventists in England – of all places! It is by far the best version of this old “spiritual” I could find.

So when I saw it, I fell on my face, and I heard a voice of One speaking. And He said to me, “Son of man, stand on your feet, and I will speak to you.” Then the Spirit entered me when He spoke to me, and set me on my feet; and I heard Him who spoke to me. And He said to me: “Son of man, I am sending you to the children of Israel, to a rebellious nation that has rebelled against Me; they and their fathers have transgressed against Me to this very day. For they are impudent and stubborn children. I am sending you to them, and you shall say to them, ‘Thus says the Lord God.’ As for them, whether they hear or whether they refuse—for they are a rebellious house—yet they will know that a prophet has been among them.”

The above is abbreviated, leaving out a great deal.  Please read the first three chapters of Ezekiel for yourself.

Could Ezekiel fully describe what he saw? Of course not. Words are too weak. It would be like trying to describe the color blue to a man born almost blind, who had seen only shades and shadows. Remember that angels and archangels by nature have no form. Here they took a form which Ezekiel could scarcely cope with.

What did it all mean? The Fathers of the Church many centuries later saw the human likeness upon the sapphire throne as a prefiguring of the Incarnation, of God made Man Jesus Christ exalted in the Highest Heaven. They interpreted the faces of the four living creatures as symbols of the four Evangelists: the man (Matthew), the lion (Mark), the ox (Luke), the eagle (John). Ezekiel certainly didn’t understand that. (To be honest, I don’t either.)

Ezekiel did understand clearly that he was called to be God’s prophet to the people. This was the first of his many visions into the Higher World.

Some artists have attempted to portray Ezekiel’s “un-portrayable” vision, of which here are three samples: Which do you think comes closest? (If you tell me what you think in the Comments below, then I’ll tell you what I think.) 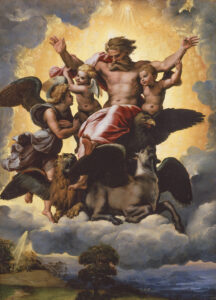 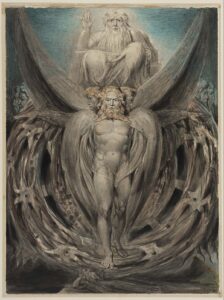 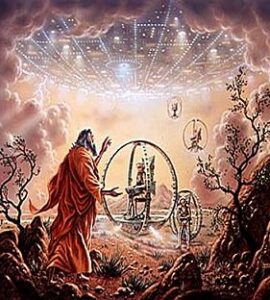 The Prophetic Ministry of Ezekiel 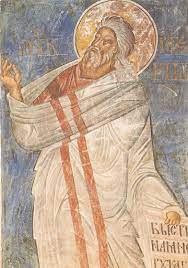 Prophets, remember, were not “fortune tellers”. Rather, they declared the Word of the Lord. Then usually it was up to the people and their leaders to determine the future, by whether they obeyed God or refused to obey.

Ezekiel lived in the Sixth Century before Christ. He was twenty five years old when he was among the people of Judaea who were taken into captivity in Bablyon. This was during the second invasion by the Babylonian King Nebuchadnezzar, when he leveled the city of Jerusalem.

There in Babylon Ezekiel received this dramatic call from God. Then he does a sort of “flashback”, telling how even before the Captivity, God had shown him that it was coming.

Ezekiel proclaimed in word and in writing the love of God for His people, but that their captivity in Babylon was the result of their sins and those of their leaders, many of whom had turned from God to other gods to idols. Ezekiel prophesied that if the people returned to God and were faithful, the time was coming when He would restore them to their own land, and their temple would be rebuilt. He writes of his many visions of Heaven, and how again and again he was commanded what to prophesy: “Thus says the Lord…”

In the limited space we have here, these few words do not begin to catch the spirit of the man and of the book of the Prophet Ezekiel. Read it for yourself  – but be prepared: There are 48 chapters.

Here are two of Ezekiel’s visions of which the Church has made much:

Ezekiel’s Vision of the Restoration of the Temple

from chapter 44, a portion of which is read at Vespers on certain Feasts of the Incarnation.

Then He brought me back to the outer gate of the sanctuary which faces toward the east, but it was shut. And the Lord said to me, “This gate shall be shut; it shall not be opened, and no man shall enter by it, because the Lord God of Israel has entered by it; therefore it shall be shut. As for the prince, because he is the prince, he may sit in it to eat bread before the Lord; he shall enter by way of the vestibule of the gateway, and go out the same way… 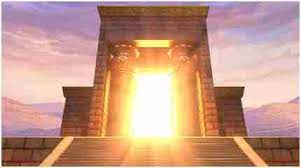 Also He brought me by way of the north gate to the front of the temple; so I looked, and behold, the glory of the Lord filled the house of the Lord; and I fell on my face.

The East Gate of the Temple in Jerusalem was not to be opened till “the Lord God of Israel” had entered it… “the Prince”. Who is the Prince who is the Lord God of Israel? Our Lord and God and Savior, the Son of God, the Daystar who shall rise in the East, Jesus Christ whose glory fills the temple. The Blessed Virgin Mary His Mother is the Temple and the Gate. Our churches are properly oriented towards the East – from where Christ rises and comes to us, and through the Holy Eucharist we are filled with the hidden Glory of the Lord, and we are now temples of the Lord.

Ezekiel’s Vision of the Dry Bones 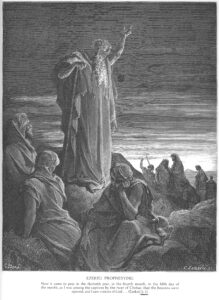 The hand of the Lord came upon me and brought me out in the Spirit of the Lord, and set me down in the midst of the valley; and it was full of bones. Then He caused me to pass by them all around, and behold, there were very many in the open valley; and indeed they were very dry. And He said to me, “Son of man, can these bones live?”

So I prophesied as I was commanded; and as I prophesied, there was a noise, and suddenly a rattling; and the bones came together, bone to bone. Indeed, as I looked, the sinews and the flesh came upon them, and the skin covered them over; but there was no breath in them.

Also He said to me, “Prophesy to the breath [or “spirit”], prophesy, son of man, and say to the breath, ‘Thus says the Lord God: “Come from the four winds, O breath, and breathe on these slain, that they may live.”  ” So I prophesied as He commanded me, and breath came into them, and they lived, and stood upon their feet, an exceedingly great army.

Then He said to me, “Son of man, these bones are the whole house of Israel. They indeed say, ‘Our bones are dry, our hope is lost, and we ourselves are cut off!’ Therefore prophesy and say to them, ‘Thus says the Lord God: “Behold, O My people, I will open your graves and cause you to come up from your graves, and bring you into the land of Israel. Then you shall know that I am the Lord, when I have opened your graves, O My people, and brought you up from your graves. I will put My Spirit in you, and you shall live, and I will place you in your own land. Then you shall know that I, the Lord, have spoken it and performed it” says the Lord.

Could the nation of the Jews, held captive in Babylon, “dead” those 75 years, rise again? Yes, it could, and they did!

Could Jesus Christ, literally dead in His tomb, rise again? Yes, He could, and He did!

Can our bones, soon to lie dead in our tombs, rise again? Yes, they can, and by the grace of God they will! We will! 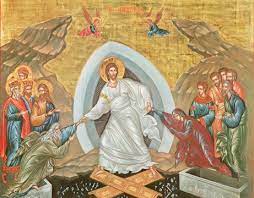 How did it all turn out?

Well for the Hebrew people. About 75 years later the Persians conquered the Babylonians, and their King Cyrus allowed the Jews to return to their homeland.

Not so well for Ezekiel, who died before that day came – and in the way true prophets often did. His own people killed him. Because he had denounced a  Hebrew prince for idolatry, Ezekiel (you may not want to read this) was tied to wild horses and, while alive, was torn into pieces. People gathered up what was left of his body and buried it in the tomb of the forefathers of Abraham, near to Baghdad. There Jews venerated it for many centuries. After the rise of Islam, Muslims and Jews often got along and shared Ezekiel’s tomb. This continued under the British occupation. Saddam Hussein likewise protected the Jewish minority – as he did other religious minorities, including the Christians. However since his downfall, Muslims have taken over the tomb of Ezekiel and have converted it into a mosque. 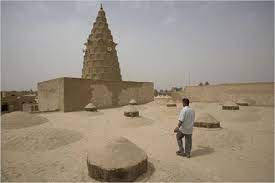 The Next Three Weeks:

I just realized something: I have now produced an original Post each week for over 5 1/2 years – repeating only the twice-daily Holy Week Posts. It is time to take a break! Therefore I will do so, as follows:

Week after Next: Here’s one I’ll bet you’ve not heard of before: Saint Olaf of Norway and also The Seven Maccabean Brothers