In the Church calendar, today July 29, we commemorate Saint Olaf, and next Monday August 1 we honor the Seven Maccabean Brothers.

I put the “who?” after Saint Olaf, because I’d be willing to bet that most of you don’t know anything about him. I didn’t. (Do we have any Norwegian readers here?)
Why (just in case any of you don’t know) are we Eastern Orthodox celebrating a Western saint? We Orthodox honor most Western saints who came before 1054, the rather arbitrary date of the Schism between Eastern and Western Christianity. In fact in recent times, as Orthodoxy has moved into the Western world, Orthodox folks have re-established devotion to some Western saints who had been forgotten in Protestant countries. Likewise, Roman Catholics commemorate John Chrysostom and Saint Basil and most other saints from the East.
Saint Olaf lived before (just barely before) the Great Schism, so 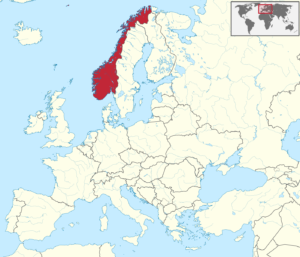 As for Saint Olaf, the more I read about him, the more confused I got, and the less I wished I had promised to write about him. (Various sources contradicted each other about the details, and I seemed to run into Olafs and Olofs and Olaves and Olavs all over the place.) Nevertheless I promised. I’m not on my home turf here, so if any of you spot errors, please let me know. 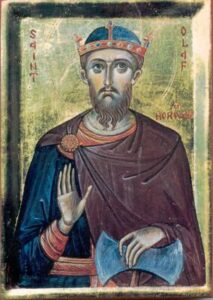 “The holy, glorious, right-victorious martyr and right-believing King Olaf II of Norway (sometimes spelled Olav) is also known as Olaf Haraldson and was a son of Earl Harald Grenske of Norway. During his lifetime he was also called Olaf the Fat. He was born in 995 A.D., and ruled Norway from 1015 to 1028, when he was exiled. He died two years later on the field of battle at Stiklestad, killed for his support of the Christian faith and his attempt to unite Norway into one nation. * His feast day is July 29. He should not be confused with his predecessor Olaf Tryggvason (King Olaf I of Norway)”.

What we know of his life came from the pen of Snorri Sturluson, a 12th and 13th century Icelandic historian. In his youth Olaf took part in Viking pirate raids into England. Vikings were unsettled men from the Scandinavian countries who raided France and Britain. Some were so fierce (as I was told in Anglican seminary) that  British along the coasts added a petition to their Litany begging God to protect them “from the fury of the Norsemen”.

Other Vikings were just adventurers seeking their fortune. Olaf apparently was one of these, for in England he first came into contact with Christianity and was drawn to it. It’s not altogether clear why he went to Normandy (in northern France) where he was baptized. He then returned to Norway and, with much difficulty and in many battles, finally united the tribes and was proclaimed King.

Just in passing, Olaf’s private life was confusing to say the least. This is from Wikipedia: “He made peace with King Olof Skötkonung of Sweden through Þorgnýr the Lawspeaker, and was for some time engaged to Olof’s daughter, Ingegerd, though without Olof’s approval. In 1019 Olaf married Astrid Olofsdotter, King Olof’s illegitimate daughter and the half-sister of his former fiancée.” * You’ll hear more about the family later. 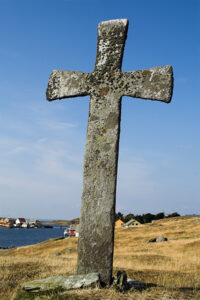 Old stone crosses and other Christian symbols along the coast of Norway give evidence of an earlier Christian presence in the land. However as King, Olaf made it his purpose to bring all Norway to the Christian Faith under his rule. He demolished pagan temples and built churches. He brought many bishops and priests from England. He established a legal code for the Church of Norway.

The Church in Norway was under the jurisdiction of the Pope of Rome, but it wasn’t till after Olaf’s time that Roman Catholic canon law (priestly celibacy, for example) became the norm.

Was the Norwegian Church Orthodox? Yes. That’s the only kind of Christianity that existed in the West at the time. The theological squabbles of Eastern Christianity were long gone (even if not entirely resolved), the Western break with Orthodoxy was still a few years in the future, and the Protestant rebellion wouldn’t come for five centuries.

King Olaf’s rule did not last very long, but his legacy has. It was Olaf’s illegitimate son Magnus the Good * who, with his, um, concubine Alvhid *, promoted the cult of his father. Churches were dedicated to him in many places, including Denmark which he then ruled.

Olaf was an unusual saint, granted – a warrior king – but those were very unsettled times out on the edge of known civilization.

Saint Olaf is today the patron of Norway and of the Faroe Islands to the north.

There are churches dedicated to Saint Olaf (or Olav or Olave) all over the world, chiefly Lutheran, but also Roman Catholic and Anglican. I’ve found a Saint Olave’s Church in Serampore, India, and a Saint Olaf Kirke in Cranfills Gap, Texas. (here) 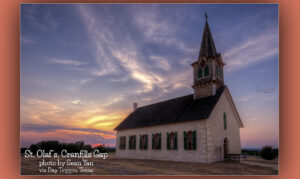 Today the Lutheran Church of Norway has about 3.7 million members, 69% of the  Norwegian population. It is supported financially by the state, and each person’s tax money goes to the C of N, unless they choose to opt out.

Church attendance is more or less in line with that of the rest of western Europe – that is, poor, to put it mildly.

As of 2004, only about 12% of the members of the Church of Norway attended church as often as once a month. Saint Olaf, who gave his life and death for the sake of establishing Christianity in Norway, is not pleased. 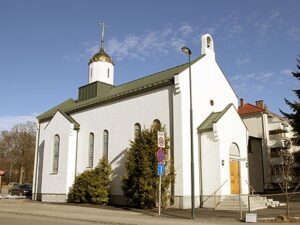 And then there were his students and disciples, the seven Maccabean brothers. They were taken to  Antioch for trial, where they confessed themselves to be followers of the One True God, and they refused to eat pig’s flesh when it was thrust upon them.

The eldest brother spoke for the rest, saying that they would rather die than break the Law of God. In sight of his brothers and their mother, his tongue was cut out, he was scalped, and his hands and feet were cut off. Then a cauldron and a large frying pan were heated, and the first brother was thrown into the pan and was fried alive till he died.

The next five brothers were tortured one after the other. The seventh and youngest brother was the last one left alive. Antiochus asked Solomonia to persuade the boy to obey him, so that at least one of her sons would survive. Instead, she told him to follow the courage and faithfulness of his brothers. The child then upbraided the king and was tortured more cruelly than his brothers had been, and… [you don’t want to hear about it.]

Their mother Solomonia was last to die. She who had taught them, now followed them in their great courage. She had watched all of her seven sons die, one by one. She stood weeping over their bodies, raised up her hands in prayer to God and died. Lord have mercy. 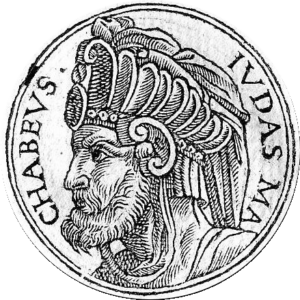 The story of the  faith and steadfast courage and martyrdom of the Maccabean brothers, their teacher and their mother, was spread secretly among the Jews.

It inspired Judas Maccabeus (son of a Hebrew priest who with his family had previously fled to the hills) who became a guerilla leader and led a revolt against Antiochus Epiphanes. Amazingly, with God’s help, he gained the victory, and drove the Greeks out of Palestine. He then purified the Temple at Jerusalem and threw down all the pagan altars and shrines in the land. 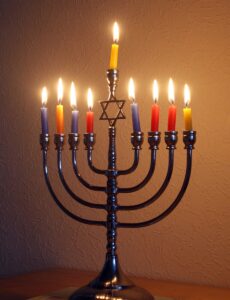 Jews celebrate the Maccabean victory over Antiochus each year in the festival of Hannukah. Because of them an independent Jewish nation was established…

…though only for about a century, till the Romans moved in. The Romans, however, were more tolerant of other peoples and their religious practices, so long as they behaved themselves and didn’t make trouble. (This was why the priests and pharisees later were so afraid that Jesus would lead a rebellion.)

So it was because of the Maccabees and their teacher and their mother – these nine brave people – that the Jewish Faith survived, so that a century and a half later Jesus Christ was able to come to His own believing people, who were eagerly awaiting their Messiah.

Sadly the Messiah they (and we) got was not the Messiah they wanted. But in light on their recent history, can we understand why the Jews were so eager for a warrior Messiah who would restore the Jewish nation?

A number of the Church Fathers (Saint Cyprian of Carthage, Saint Ambrose, Saint Gregory Nazianzus, Saint John Chrysostom, among them) preached sermons about the Maccabees, making this point, drawing this moral:

The bravery and steadfastness of only a few people can preserve the Faith and can change the course of history.

The next two weeks: After over five years of Posting every week (with only one exception), I’m going to take a break. In anticipation of the great Feast of the Dormition, I’ll republish my two old Posts on “Why do we honor the Mother of God? Because the Bible says so!”

In three weeks a very personal Post: “As I begin my 85th year…”