These four services are the short “Hours” (First Hour (dawn), Third Hour (9 a.m.), Sixth Hour (Noon), Ninth Hour (3 p.m.) sung in monasteries. Today they are scheduled also in parish churches – usually on Holy Friday morning, or in some places scattered through the day. On this day they contain the entire Gospel readings of the Passion of Christ: First Hour, according to Saint Mark; Third Hour, Saint Matthew, and so on. Yes, we hear them all again.

Why are they called “Royal” Hours? It’s actually a nickname, given because on Holy Friday the Emperor (or Tsar, or by whatever title in each country) and his family and entourage would attend. (This doesn’t seem to happen in America…)

I’m not going to comment on the Passion again here. There is nothing and everything yet remaining to be said about it, so I won’t even attempt.

Some lessons we can learn from Holy Week

Usually and rightly we concentrate now on the things which lead to our own salvation, each one of us. But there also are some matters with wider implications which often pass us by, because there is just so much to take in.
Most of what follows is based on a Post I wrote some years ago, revised here for the sake of clarity.

1. The danger of zealotry

Let me repeat a bit of the story from last weekend:

Why did the scribes, pharisees and priests arrange the execution of Jesus of Nazareth? Let’s try to look at it from their point of view.

Was it simply because they were evil men? Yes, of course they were, to some extent. (They were not alone in this! There is evil in all of us. We are all part of the fallen world.) 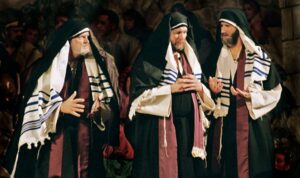 Did the authorities in Jerusalem intend to kill their Messiah? No, they did not. They did not believe He was the Messiah. He did not fulfill so many of the Old Testament prophecies. (Remember how even John the Forerunner had his doubts. John, unlike many people, didn’t expect Him to wipe out the Romans, but he had expected Him to bring in the Kingdom of God – and He had not. In response the Lord quoted prophecies that He was fulfilling, “and blessed is the man who takes no offense in Me” [or “does not fall away because of Me”].  Matthew 11:6

So, as is clear from the accounts, the authorities believed they had an obligtion to stop to this false Messiah, lest He (or “he” as they believed) start an uprising and the Romans move in. “Better one man die than that the nation be lost.”

Did they have mixed motives? Yes – again, as who doesn’t? Name me one thing you have ever done out of totally pure disinterested love.

To be specific, in addition to their concern for the nation, Mark wrote that “it was out of envy that they handed Jesus over” Mark 15:10 – these wise seasoned old men being made to look like fools by this young north-country upstart. Remember, Jesus was only 33. It must have been so very hard for them to take Him seriously. (I fear that I, now in my 84th year, would have had the same problem.)

However, they were almost single-mindedly and sincerely zealous for their nation. That was the thing that mattered. Because of that, they could not see the One who was “in their midst”.

And so, as we said, in the end it was not because of Him, but because of them and their blind zealotry for their nation, that the nation they truly loved was lost. In that way only, I feel sorry for them.

2. The greater danger of religion

This section is taken almost without change from my Post of four years ago. I did not write it to deal with the current situation.

Note again carefully: It was the religious leaders, not the politicians, who plotted Jesus’ death. Pontius Pilate the governor didn’t want to do it. “Why, what evil has He done?” he would ask on Holy Friday. But the Jewish religious leaders pushed, manipulated Pilate into executing Him.

Dr. Samuel Johnson said, “Patriotism is the last refuge of scoundrels.” No! Patriotism is next to last. Religion is the last refuge of scoundrels. True religion is, of course, the source of enormous good: hope and holiness, meaning for life and great charitable work. But we have seen for centuries, we see today what horrible things can be done in the name of religion. Religious leaders of many kinds have done great evil or ignored great evil – for the sake of what? the nation? the religious institution? its position? its power? preserving their own position? their own power? Like the Jewish authorities, it’s not that they intend to do evil. The problem is that religious leaders are often so sure, so sincerely certain they are right, that their will is God’s will, their ideas are the truth, that they can be blind to anything else. You see what it can lead to, both 2000 years ago and today, if religious leaders have lost their way.

One of my favorite pieces of advice is that 1960s slogan: Question authority. Not with blind doubt, of course. Authorities are often right. But if the Jews 2000 years ago had questioned what their authorities said about Jesus…  what might the world be like today if they had believed in Him? Question political authorities, of course, but also question religious authorities. Not only the rich preachers on TV, not only the priests who use their position to steal or do horrible things to youth and their duplicitous superiors who cover up for them. Also question your own priest and your bishop and your archbishop. Gently, gently, please, not in a nasty way. You might be wrong. But clergy also can be wrong, and humility requires that they accept questioning. Also, definitely question the author of this Blog and what I write. I might be wrong.

Orthodox Christians, this is your obligation, for we are not an authoritarian “top-down” Church. All Orthodox people are guardians of the Faith and of the Church. So if you ever think any of us in positions of leadership in the Church are out of line, misusing our authority, do not let us get away with it.

3. The very great danger of religion aligned with political power

This also is taken almost verbatim from my earlier Blog Post.

Now, of course religion should influence politics. This can lead to great social good: Byzantium the greatest of empires, the abolition of slavery, Martin Luther King and racial justice, and much more. But if religious authority and political power become enmeshed, be afraid, be very afraid. Religion combined with politics can lead to Christian emperors destroying icons, to the  Crusades, to the Inquisition, to the 100 Years War, to Isis, to what has been done to Jews and Palestinians and Syrians and Iraqis – and to the killing of God.

I think Byzantium had the ideal, in principle if not always in reality: civil authority and religious authority working in synthesis with each other, or sometimes playing against each other if necessary, but not confusing each others’ roles. Did you know: because religion with political power is so dangerous, the Orthodox Church does not allow clergy to hold political office. For our chief work is not to compel but to convince, convert, win people to Christ and His way of love.

That is how our Lord Jesus did it: Do we see Him this Week leading an army? taking over the government? On Friday morning Pontius Pilate will say to Him: “So you are a King then?” Jesus will answer, “You have said it… but my Kingdom is not of this world.” 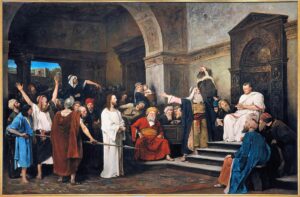 The Jewish authorities therefore decided the only way to get rid of Him was to violate their own Law: “Have nothing to do with a false charge and do not put an innocent or honest person to death, for I will not acquit the guilty.” Exodus 23:7  When Pilate wanted to release Him, it was better then to lie than that the nation be lost: “If you let this Man go, you are not Caesar’s friend. Whoever makes himself a king speaks against Caesar.” And when Pilate asked, “Shall I crucify your king?”, they concluded it was better to blaspheme their God (“We have no king but Caesar”) than that the nation be lost. “The ends justify the means.”

All in the name of the “greater good”, their zealotry to save the nation. So by abandoning their morals and their God, they succeeded in executing Christ their God – and their nation was lost. Lord, have mercy. What if they had believed? What if… but they did not.

Can you think of any contemporary examples of religious leaders selling out their moral principles for political gain?

It was written that many of the people hoped in Jesus. See them as He enters the city. But in the end they trusted their authorities, as most people usually do. (I think our present distrust of government in America is an historical aberration.)

And so as Jesus had predicted, “the Kingdom will be taken away from you and given to a nation that will bear the fruits of it” – the Church. Years later Saint Paul would write: “For if God did not spare the natural branches, He will not spare you either.” Romans 11:21  If God did not spare the Jews, when they were unfaithful, what do you think will happen to us who have been grafted on? to us if we are blind? unfaithful? if we misuse the Church and twist our holy religion to our own ends?

Here is something verbatim which I wrote in this Blog during Holy Week four years ago. Somehow it seems still relevant today:

“I’m no expert on international politics. However our very Orthodox Vladimir Putin is beginning Holy Week by threatening the world with an ICBM nicknamed ‘Satan 2’. *  I’m wondering if maybe he should begin Holy Week by taking a closer look at Jesus.”

* April 22, 2022: …and who has just rejected the call from many sources for a Pascha cease fire for the evacuation of civilians. Draw your own conclusions.

This afternoon we’ll look at “The True Source of Power”.

Next Post will follow later today, for Holy Friday afternoon Vespers: The Taking Down of Christ from the Cross

3 thoughts on “322. Great and Holy Friday Morning: Some Practical Lessons to be learned from Holy Week”