Before we begin, I don’t want to (but probably should) note regarding Post 320 which had refused to open: As soon as I sent out a second copy, both copies suddenly opened. I swear I haven’t had this problem since (I think) last Holy Week. Forgive me for the confusion, but it wasn’t me, it was demons. Be careful. They’re to get you, too. It’s Holy Week. 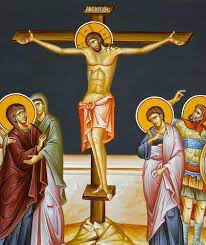 Regarding this service: Be prepared this evening for well over two hours in church. A powerful two hours. I have never felt the story of our Lord’s Passion more deeply than at this intense service.

1  In the services and readings of Holy Thursday and Holy Friday, you will find much repetition in the Gospel readings. When I was first Orthodox, it nearly drove me up the wall. I thought wasn’t once or twice enough? The answer is No, it is not. Eventually I understood. The Church is trying to drum this life-giving story of our Lord’s Passion so deep into our heads and hearts that it is just part of us. It works. I have never known and understood so much, and felt so deeply, about Christ’s Passion, Death and Resurrection, as since I’ve been Orthodox. It’s said that Western Christianity focuses on the Cross, while Eastern Christianity focuses on the Resurrection. No. We focus on both. If you don’t believe that, come to Orthodox Holy Week.

2  The first reading in the Twelve Gospels service goes on seemingly forever: Christ’s last teachings to His disciples, and then His high priestly prayer to His Father. I think it would take a lifetime and more to absorb it all. But please try. (Years ago at an Episcopalian convent, I attempted to do a series of talks on this passage. I wish I had not. It was too much for me. They never invited me back.)

And also, if you’re new to this service, don’t despair and go home! Each of the Twelve Gospels gets progressively shorter.

Unless I’ve missed something, the story of Christ’s “command performance” before King Herod when He refused to do a miracle for him (Luke 23:6-12) is not read during Holy Week. I wonder why.

Here I will try to provide a brief overall narrative of the events. In this conflation I’ll omit much and hope I have not got anything out of order. Sometimes it’s hard (for me at least) to precisely harmonize the Gospel accounts. 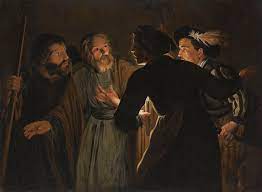 Picking it up early on Holy Friday morning: Jesus had been captured during the night in the Garden of Gethsemane, taken in custody and mistreated while waiting for the Jewish Sanhedrin, their high court, to gather. Meanwhile, Simon Peter had thrice denied that he even knew Jesus, then had fled, crying bitterly, so ashamed of himself.

The Lord had been condemned to death by the Sanhedrin on grounds of blasphemy, “making himself equal with God”. “Blasphemy! He deserves to die!” However, Israel was an occupied country, and the Romans forbade them to execute anyone. So now they had no choice but to cooperate with the enemy.

The chief priests and elders took Him to Pontius Pilate the Roman governor. The Romans could not have cared less about blasphemy against this peculiar God of the Jews, so the priests were forced to lie about Jesus. They gathered a crowd on the Gabbatha, 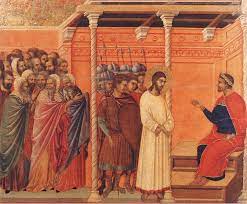 the pavement in front of the Praetorium, the governor’s palace, telling Pilate that this Jesus was making himself a king and something had to be done about it.

Pilate understood none of this and probably was irritated by being awakened so early by all this commotion – couldn’t they at least have waited till later in the day? But he needed to settle things down, so he interviewed Jesus: “So you are a king then.” Jesus gave a nebulous answer: “You say that I am a king… but my Kingdom is not of this world.” John 18:36  Pilate was perplexed, but saw no threat in this humble, quiet, very unkinglike man. He went out and announced that he found no fault in the man and so he would release Him. “No! Crucify him!” came the crowd’s response. Now what to do? so he had Jesus beaten, thinking maybe this would satisfy them. It didn’t. “Why?” asked Pilate, “what evil has He done?” “Crucify Him! Crucify Him!”

Were these the same people who had welcomed Him on Sunday with “Hosanna”? Great sermons have been preached here about how the populace can turn on a dime – but in this case, likely not. Why would ordinary folks be here at dawn on a workday? Probably the crowd had been gathered for the event – paid off by someone? We do know well – there is recent evidence – that almost any group of people, when cleverly riled up, can turn into an irrational mob. Whatever the cause, they chose a criminal rather than an innocent Man. It had happened before in history. It would happen many times again.

Meanwhile Pilate’s wife sent a message. She’d had a dream about this man: “leave Him alone”. Pilate was at his wits’ end. Now he had not only to settle these unruly incomprehensible people, but also not offend his wife! So he tried again. He had Jesus dressed up sort of like a king and brought Him out. 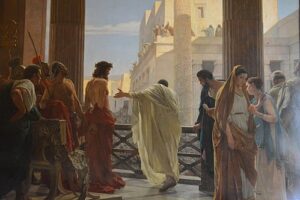 No truer words were ever spoken. Here was The Man, perfect Man, humanity brought to  completion. No other true Man has ever lived.

Pilate thought surely they will now see that this humble, mild-mannered man is no king. “Crucify Him! Crucify Him!” again came the cry. “Crucify your king?” asked Pilate, in a half-taunting, half-jocular way, half-hoping maybe he could still work his way out of this.

The Jewish authorities must have been prepared for it, for now they took the big lie a step farther: “If you let this man go you are no friend of Caesar’s. Whoever makes himself a king speaks against Caesar.” John 19:12  – which would, of course, be treason. They were not the last religious authorities to take this attitude; they also might just as well repeat these words: “We have no king but [you fill in the blank].”

And so here it was: They, the righteous religious authorities were the ones who were blaspheming God, they whose only true King was and had always been the Lord God of Israel. Plus they were liars, and Pilate knew it: the Jews hated Caesar. 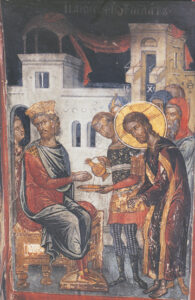 icons by permission of Saint Isaac’s Skete at skete.com

Pilate knew he was trapped. What if word got back to Rome that he had let a treasonous man go free? So now, fearing for his own position as governor, Pilate literally “washed his hands” of the matter – and you know the rest.

Every great man wants to leave a “legacy”. Here would be the legacy of Pontius Pilate, proclaimed in countless churches by millions upon millions of people for the next 2000 years: “He was crucified also for us under Pontius Pilate”.

Was Pilate just an evil man? The evidence is that he tried hard to satisfy his conscience – so much so that the Ethiopian Orthodox Church lists him on their calendar as Saint Pontius Pilate! But I don’t think so. What we know of the rest of Pilate’s life gives no evidence that he was a saint. He was just a politician. Are there good politicians? Yes. But we all know how many politicians who once meant well are willing to forsake their honor, so as not to lose their positions, their power.

So in the end they all – the religious leaders and the politicians and the mob – got together and executed God.

In this service in most churches, the figure of Christ is now removed from the Cross in the altar, processed through the church, then afixed again to the Cross (which has now been placed in the midst of the church), as this hymn is sung:

A crown of thorns crowns Him Who is the King of the angels.
He is wrapped about with a purple of mockery Who wrapped the heavens with clouds.
He receives smiting He Who freed Adam in the Jordan.
He is transfixed with nails Who is the Son of the Virgin.

Show us also Thy Glorious Resurrection.

But NO! This is above all a cause to rejoice! Because the powers of the fallen world did their worst. They and we can’t do worse than kill God in the flesh. And it did not work! Christ arose! He could not be put down.

And so, despite appearances sometimes, despite our despair sometimes, the truth is that the salvation of the world and our salvation (if we will have it) is assured. The world can never get rid of God, of Christ our God, or of His holy Body the Church.

So now Jesus Christ will die and enter into hades to do His most important work. He will “trample down death by death” from the inside, and set free all the dead from all times, and lead us all with Him through death and out the other side into the Light. 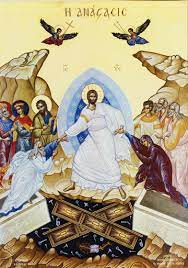 Greater love has no man than this, than that He should lay down His life for His friends. John 15: 13

In this is love, not that we loved God, but that He loved us and sent His Son to take away our sins. Beloved, if God so loved us, we also ought to love one another. I John 4:10-11