Before we get into the Gospel story…

Tonight at the end of the Aposticha we hear the Hymn of Kassiane, a Ninth Century nun and hymnographer.  She was one of several young women interviewed by Emperor Theophilus as a prospective bride. The story says he was so flummoxed by Kassiane’s beauty that he said something stupid, as men have been known to do: “From a woman came forth the baser instincts”, that is from Eve. Not very romantic, you say? And then he was flummoxed by her brilliant retort: “Yes, and 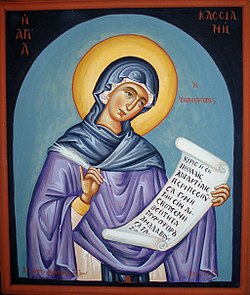 from a Woman came forth the best thing of all”, that is, Jesus Christ. Now Theophilus was embarrassed by his ineptitude, and he chose someone else, but it was said he always regretted it.

Kassiane became a nun, founded a monastery near Constantinople, and wrote many hymns, including tonight’s about the sinful woman who anointed Christ. It was said that late in life the Emperor went to the monastery hoping to see Kassiane once more. She hid, leaving her unfinished hymn, her love song to Christ, on the table, and after he left she found he had completed it. Perhaps only a lovely legend, but it’s definitely a beautiful hymn.

Last night we heard Saint Matthew’s account of the end of Jesus’ public ministry. Now we hear John’s version which is quite different. However, I see no discrepancy. Far more happened than could be written down. All four Gospels are “condensed versions” from different perspectives. Young John had been Jesus’ closest confidante (and according to Church Tradition, a cousin or second cousin) and no doubt got the “inside story”. Later titled “the Theologian”, I think he quickly  understood much, before the other Apostles did. Also I think John, writing after the others, was adding stories omitted by Matthew, Mark and Luke which he felt were too important to be lost.

All John tells us of the Holy Week confrontations is the final complaint of the Pharisees: “We’re getting nowhere. The world has gone after Him”.

“The world”: Now some Greeks (Greek speaking Jews from out in the Empire? or Greeks sympathetic to Judaism?) who were in the city for the feast came saying, “We want to see Jesus”. They went to Philip (which was a Greek name) who went to Andrew (Andreas, also a Greek name) who told Jesus.

The Lord took this as a sign that His ministry to the Jews was over. Now it was time to move on and give His life for the life of the whole world. “The hour has come for the Son of Man to be glorified.” He will be a grain of wheat that falls to the ground, so it may produce a great harvest.

Kollyva (Κόλλυβα in Greek), the wheat which we use at memorials for the dead, was a pre-Christian Greek symbol of new life. (Here are large number, for a “Soul Saturday “Liturgy. 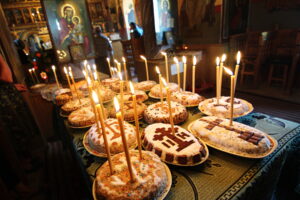 Christ gave it new meaning: He is the seed planted in the earth from which new and greater life springs up – His Death and Resurrection. So by His grace shall we be in our death and resurrection.

He continued: “What shall I say, Father, save me from this hour? No,” (said almost to Himself) “This is why I came to this hour. Father glorify thy name.” A voice was heard: “I have glorified it, and I will glorify it again.” Thunder? the voice of an angel? Jesus said, “This voice has come for your sake…Now is the judgment of this world. Now shall the ruler of this world [Satan] be cast out, and when I am lifted up from the earth I will draw all the world to myself.” And here we are, brothers and sisters, thousands of miles away and twenty centuries later, still drawn to Him by Hs love lifted up on the Cross.

His hearers didn’t understand – little wonder. “But isn’t the Christ supposed to remain forever? Who is this Son of Man? What is this ‘being lifted up'”? He gives no answer. He is done with words. Now He will show them. He says only, “A little while longer the light is with you. Walk in the light while you have the light, that you may become sons of light.” Then He departed and “was hidden from them”. His public ministry was over. was their Messiah. John says this fulfilled the prophecy of Isaiah: God has “blinded their eyes, hardened their hearts lest they should see and understand”. But that was no explanation. John had no explanation. Though he adds that even some of the rulers did believe but didn’t admit it, lest they be cast out of the synagog, for “they loved the praise of men more than the praise of God” – and that was even worse.

By permission of Saint Isaac’s Skete at skete.com

Then John returns to the story – and this always fills my eyes with tears – Jesus cried out. This was in private. I wonder if only His beloved John was there to hear it. He cried out in grief. He had known from the beginning He would be rejected, but still…  Even if we know something terrible is going to happen, it still hurts, indeed all the worse for knowing it was coming, and this pained Him so deeply. But I think it wasn’t only the Jews who caused Him to cry out.  It was all who would turn away from Him and His love – and that’s us sometimes, isn’t it?

Jesus looked back and summed up His ministry and His “identity”: “He who believes in me believes in Him who sent me… He who sees me sees Him who sent me… I have come as light to the world, so people might not walk in darkness… If anyone does not believe in me I do not judge him…  I came not to judge but to save…but what I have spoken will judge him on the last day… For I have not spoken on my own authority. I have said only what the Father told me to say, and I know that in it is everlasting life.”

To intentionally reject Jesus Christ and His words is to reject everlasting life. For Christ is God and God is life, and only in God is life. “I am the resurrection, I am life”, He had said. Then He repeats: “I have spoken only what the Father told me to say.” As if, even though He knew what would happen, He couldn’t accept it, couldn’t believe it. How was it possible that they could reject something so beautiful, so life-giving, so true, so obvious? Yet there it was. And it was breaking His heart.

I think this is Jesus at His most human, and this the most heart-wrenching passage in the Gospels.

It was now Tuesday night. Tomorrow Judas will go to the authorities and ask, “What will you give me if I deliver Him to you?”

Next: Post: Holy Wednesday Morning Liturgy of the Presanctified Gifts