The Exaposteilarion hymn sung in Bridegroom Matins – from “Orthodox Chants”.

In tonight’s Gospel, the confrontation between Jesus and the authorities continues. They must stop this Man. Killing Him was the last option. The better way, the cleanest way, was still to outwit Him, discredit Him. They’d had no success at this so far. This Man from Nazareth, that obscure village up in the hills of Galilee, was outwitting them. Now they try one last time.

The Pharisees try to butter him up: “Teacher, we know you teach the truth” – they don’t believe a word of this – “so is it lawful to pay taxes to Caesar or not?” A trick question: If He says No, the Romans will arrest him for treason. If He says Yes, the people will turn against Him, for they hated paying high taxes to the oppressor. His answer: “Pay to Caesar what is Caesar’s, and to God what is God’s.” And all Jews knew what is God’s – everything. I guess we shouldn’t be surprised that the Son of God was quick-witted! but still… this was so clever, so masterful.

Next come the Sadducees. Sadducees disbelieved in resurrection and angels; they were almost secularists, though they did believe in God. A woman who’d had seven husbands: whose wife will she be in the resurrection?

Jesus’ answer is remarkable. He speaks as if He has personal knowledge of the next life, as if He has been there. He says: You understand neither the Scriptures nor the power of God, and then He explains that people don’t marry in Heaven. (To be clear about this: He says in Heaven people are not given in marriage – don’t get married in heaven. The Orthodox Church teaches that marriage is an eternal relationship which will take new form and be brought to perfection in Heaven.) The Sadducees’ question will be answered there in a way which is beyond their comprehension. Jesus goes on to challenge them: “For God is not the God of the dead but of the living”. In Luke He adds the breathtaking line (for that time): “For all are alive to Him”.

Matthew says the people were astonished at His knowledge and authority. Again, they didn’t catch him. 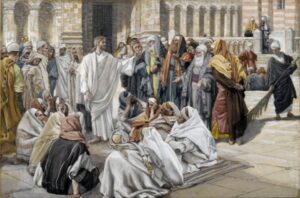 A lawyer now tests His orthodoxy: “Which is the great commandment in the Law?” All Jews knew the answer: “Love God with all your heart, mind, soul and strength” Deuteronomy 6:5 and “Love your neighbor as yourself.” Deuteronomy 19:17 Jesus answered correctly. He was not a heretic. Again, it didn’t work.

So Jesus asks them a trick question: The Scriptures say the Messiah will be Son of God. Psalm 110:1  Other passages say He will be the son of David. 2 Samuel 7:12–16, Isaiah 11:1, Jeremiah 23:5–6. How can both be true? Only He and His blessed Mother knew the answer to that: He was God who had been born into the house of David. But, of course, His accusers did not know that. He got them. They could not explain the Scriptures which they claimed they knew so well. They could not outwit Him. Indeed He had made fools of them.

So now there was only one way left to get rid of Him. And Jesus pushes them into it. He turns on them. For the Passover was at hand and, as we said, He was timing His death, so that on Friday He would become the new Paschal sacrifice, the new Paschal Lamb. He attacks them, antagonizes them. Forgive me, in what follows, for updating His words a bit:

Woe to you, Scribes and Pharisees, hypocrites, play actors, fakes. You lay heavy burdens on others but not on yourselves. You don’t love God: what you love is dressing up in fancy vestments and having people say, “Father, father, you go first”. (I hate it when people try to get priests to go first for meals.) You devour widow’s houses. You win converts and make them sons of hell worse than yourselves. You play games with God, playing it as “close to the edge” as you can get away with, like politicians phrasing your words so you can weasel out of them. You are so scrupulous about little things, you even tithe on your cooking herbs – Church services must be done without error, every canon law must be kept rigidly, fasting must be kept scrupulously. What? I saw you hold your fingers wrong when you made the sign of the cross? Meanwhile you ignore the great things: mercy, justice, faith. (Notice carefully: He does not say to ignore the rules or be sloppy about worship and fasting. He says we ought to do both, just don’t ignore the great things ) You are like whitewashed tombs, clean on the outside, filled with corruption inside. Murderers of prophets, serpents, den of snakes, you’ll all go to hell.

The people must have stood with their mouths agape. The authorities must have been burning with anger. Now He has gone too far, now this is personal, now we will stop this man. He goes on: Therefore I will send you prophets. (Listen to him. I send  prophets. It is God alone who sends prophets.) And you will scourge them and kill them. And so on you will come the punishment for all the righteous blood shed on earth, from Abel to Zachariah (fahter of John the Baptist) whom you killed in the Temple. All this will come on this generation. 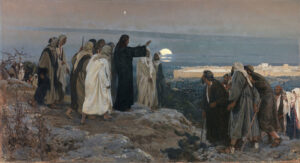 His tone changes. This is so poignant: “Jerusalem, Jerusalem, how often I wanted to gather you like a hen gathers her chicks under her wings, but you would not”. Then, again He looks into the future, the not very distant future, the destruction of Jerusalem: “Behold, your house is left desolate.”

In Matthew’s Gospel, with those words Jesus ended His public ministry to the Jews.

Next Post: Holy Tuesday Morning Liturgy of the Presanctified Gifts