Matthew repeats the story we heard last Sunday from John, about Christ being anointed with fragrant oil. John said Mary sister of Martha did the anointing. Matthew says only that it was “a woman”. Luke places this earlier in Jesus’ ministry and says it was done by a sinful woman. (How to harmonize these? I don’t know. Do you have a suggestion?)

Then Judas Iscariot went to the chief priests and said, “What will you give me if I deliver Him to you?” They gave him thirty pieces of silver, and “from that time he sought opportunity to betray him.” This is why we Orthodox keep Wednesdays as a fast day – for the betrayal. Once upon a time all Christians did. This short Gospel leaves us a little time to speculate about Judas, the most perplexing figure in the Holy Week story. Why did he do this horrible thing? The only explanation the Gospels give is for money.  Beginning Tuesday evening through Thursday evening we hear hymns about the greed of Judas that caused him to betray the Lord.

People have speculated that surely it couldn’t have been only for money, and the Gospel accounts leave openings for additional possibilities.

John says that at the Supper, after Jesus gave Judas a piece of bread (a traditional sign of friendship, affection – !), then “Satan entered into him. Jesus said to him, “What you do, do quickly.” John, sitting close to Jesus, must have heard this. It sounds almost as if the betrayal had been arranged between Jesus and Judas. Or did Judas take this as a secret sign that Jesus wanted him to betray Him in time for the Passover? Or was Jesus just tell telling Judas that He knew what he was up to?

Matthew, Mark and Luke all quote the Lord saying, “The Son of Man goes as it is written of Him, but woe to the man by whom He is betrayed.” But Judas couldn’t have been “fated” to do this. Christ who loves all mankind does not set anyone up for woe, for hell, not even Judas. And Satan does not enter into anyone unless they let him in. So this explanation still leaves us hanging.

Or perhaps it was because Judas lost faith in Jesus. He had believed, but then they came to Jerusalem and Jesus didn’t cast out the Romans and bring in the Jewish kingdom and showed no sign of doing so. Judas concluded: I was wrong, He’s not the Messiah, so quickly to save his skin and maybe to save the nation, he changed sides and went to the authorities. Perhaps.

Some speculate that Judas never had faith in Him as Son of God. “Jesus Christ Superstar” (that very bizarre but occasionally profound musical from the ’70s) theorized that Judas saw Him only as a beneficent man “who went about doing good” – as indeed He did. But as time went on it had become less about helping people and more about Jesus himself: “Who do men say that I am?” Distressed by this, Judas finally turned on Him. At the end of “Superstar” Judas is dead and Christ is risen, and Judas, in hades or somewhere, sings: Did you know what you were doing all along? were you really the Messiah? Perhaps.

But the Gospel accounts and the Church’s hymns suggest that greed alone was behind it. Was greed Judas’ “passion”, as we Orthodox call it? his “besetting sin”, as Western moral theologians term it? Christ warned us specifically (I think) against only one idol: “You cannot worship God and mammon/money”.  Matthew 6:24 Remember: John wrote that Judas used to steal 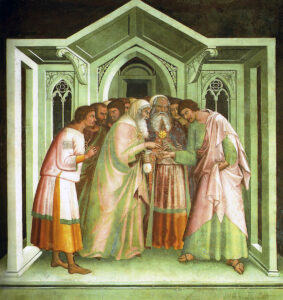 from the common moneybag.

We know, we see it today all around us, how greed, lust for money, for things, can cause people –  financiers, CEOs and ordinary folks –  to do irrational even evil things  Because they must have more money, must have everything that money can buy – and now. And how people can sell themselves to the evil spirit of Greed that way, and destroy themselves and others in the process. You know that, especially at times when we are under pressure, our passions often come at us in force – and we lose our tempers again or fall again into despair or turn to drink or drugs or food or sex or shopping – or just to money. 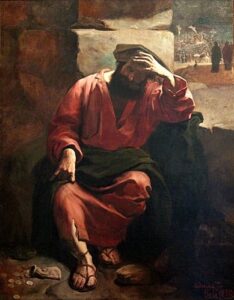 Imagine Judas, now utterly confused and tortured. Nothing is going the way he thought. Is he wrong about Jesus? Is he right? He has no idea and he’s had no sleep all week, tossing and turning, at his wits’ end. So now at this most critical moment the devil attacks: Judas’ besetting sin comes at him. His mind goes dark. He has no idea what to do next… but maybe money will help me cope, money will feel so good, nice familiar comforting soothing money. Was that it?

Listen to the words of the Holy Thursday night Troparion: “When the glorious disciples were enlightened before supper at the washing of their feet, then the impious Judas was darkened, ailing with greed, and to the lawless judges he betrays You, the Righteous Judge to lawless judges. Behold, O lover of money, how this man who because of money hanged himself. Flee from the greedy soul which dared such things against the Master. O Lord Who are good towards all mankind, glory to You!

Preceded below by the introductory “Alleluias”.

All we know is that when he betrayed the Lord he took money for it, thirty pieces of silver – and that after the Crucifixion what did Judas do?  He tried to give the money back. Apparently all he could think to do to try to get out from under this horrible burden of guilt was: Get rid of the money. The chief priests piously refused it: “It’s illegal to take back blood money.” Lord, have mercy – as if it had been legal for them to give a bribe to betray this innocent man. That hadn’t troubled them, had it? And we know Judas threw the money down and ran away: he just had to get rid of that money! 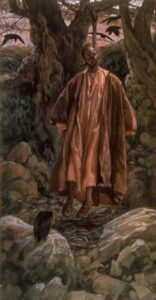 He left and soon was dead. Matthew says he hanged himself. The Book of Acts says he fell and ripped himself open on a rock “and all his bowels gushed out…”.

Judas betrayed Jesus, lost all hope, turned away and died in despair. Our hymns compare Judas with the sinful woman who anointed Jesus’ feet with her hair, who repented and was forgiven. Hers was a simple story: She knew she was a sinners, so she turned to Christ and repented. No complex motivations as with Judas, and hers was a happy ending. “There is joy in heaven over one sinner who repents.” Likewise Simon Peter denied Christ three times, but returned in repentance and was forgiven. We honor him as Saint Peter.

What if, like the sinful woman, like Peter, Judas had repented? What if he had come to the risen Christ asking forgiveness? Hanging in our churches, would we now have icons of Saint Judas?

We will never know, for Judas did not repent.