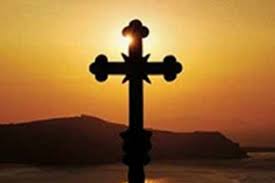 Many themes today. This Liturgy begins as a celebration of Christ’s victory over Satan and death “down below”, and before we’re done we’re proclaiming the Resurrection here “up above”. Yet after that, later in the Liturgy Christ is singing “Do not lament me, O Mother”, as if she hasn’t yet heard the Good News. If you pay close attention, it’s a little bit dizzying.

Anciently this was the beginning of the Paschal Vigil which began probably mid afternoon today (which is why this is a “Vesperal” Liturgy) and ended after dawn tomorrow, with many Baptisms outdoors – that water must have been cold! – while the Vigil continued in church. Then at some point the newly baptized would process into church dressed in white robes, singing “As many as have been baptized into Christ have put-on Christ”. They were welcomed into the community, saw the celebration of the Anaphora for the first time (!) and received their first Communions. We still sing this hymn at Baptisms and on days on which Baptisms took place in the early Church.

Long ago (because we turned into wimps) this Vigil was reduced to two separate services: the beginning (this) and the end at midnight (or thereabout) tonight with the Paschal Procession, Paschal Matins and Divine Liturgy.

“Down below”. Lest anyone be led astray about this, Christians don’t mean that literally, any more than we think heaven is “up there somewhere”. Nor do I think that is what the early Church meant by these terms. May I try to express this “scientifically”, albeit inadequately? Heaven is a series of “higher dimensions” into the Light  – Paul spoke of “the third heaven”, presumably out of seven – which finally  lead into infinity, where dwells the inaccessible God. Hell is a series of “lower dimensions” into the darkness, where Satan once held his captives, which descend into utter darkness and nothingness. As one Psalm translation dreadfully puts it, “the land where all things are forgotten”. That is where death once led, what Satan had in mind for all who died. For death is of Satan. Death is not of God. Our God is a God of life.

Now, with that prelude:

Today, down below, the victory has been won. Christ has gone into the devil’s dark kingdom of death, broken down the gates of hades and harrowed hell, and led the captives out. In the stichera early in this Vesperal Liturgy, the devil wails: I should never have taken him in. I’ve lost my captives. I’m defeated. Now it is clear, looking back to yesterday, that ultimately it was not “the world” which killed Christ. It was Satan. And it didn’t work. It was Satan who didn’t win. Now death has been defeated from the inside. As we will sing tonight, “Christ has…trampled down death by death”, by dying! Our God is stronger than death.

Tonight our Paschal icon will show the hinges and bolts of the doors of hades, of death, flying in all directions. They can never be put back together, and Christ is leading the dead of all times up out of the darkness into the Light.

To follow another theme, a hymn this morning tells us that this also “is the Blessed Sabbath” which Moses foresaw, the seventh day when Christ rested in the tomb from his labors, as once he rested on the seventh day after the first creation. And now comes a new First Day, a new and eternal Creation, the Eighth Day, the renewal, completion and fulfillment of the old creation.

This is the new Passover. I’m sure you know that Pascha means Passover. Christ is the new Paschal lamb. At the Exodus the angel of death passed over the Hebrews, and Moses then led the people up out of slavery in Egypt, through the Red Sea water, provided them with manna to eat, and through the desert to their promised land. Christ is our new Moses, and this is our new Exodus. Christ  has “triumphed gloriously”, as we sing. He leads us up out of slavery to sin and death through the waters of Baptism, feeds us with new Manna, and through the desert of this life towards our true Promised Land on high.

Early in this Liturgy, the clergy are vested as in Lent. Then before the Gospel they are re-vested in white and then sprinkle bay leaves, laurel leaves all about the church. Laurel leaves crowned the heads of victors in the ancient games. With laurel leaves and flowers we prepare the way for Christ the Victor. (When I was a new priest – chrismated one day and ordained the next, which I may explain someday – I had never seen this Liturgy, and when I read the instructions I was startled. My mother taught me never to throw things around like this indoors. So when I scattered the leaves I felt guilty! and my former Episcopalians looked aghast. But it was fun! It still is.)

Here is a  v e r y  enthusiastic Greek priest. I wish the audio would come through better. Sometimes Orthodox here in the West are more restrained than those in the old countries.

In Jerusalem this morning, the Patriarch brings the holy fire out from Christ’s Holy Sepulchre. * It is shared through the church and then is taken to the local churches, and now flown to many places including Greece, Eastern Europe and Russia – to be brought out to the people at the midnight Paschal Liturgy. Middle Eastern and  European media cover this every year. Even the BBC. In the USA, not so much.

If you want a quiet, dignified Pascha, this is not the place. These give me the holy chills every time I watch. The first is from the media. The second is very unprofessional but gives a sense of the excitement.

Today we do not yet say or sing “Christ is risen” – not till tonight, the celebration of his Holy Resurrection. But he has already won the greatest victory below, and Saint Matthew has told us what is coming here on earth. It’s no secret. So may we whisper it? “Christ is risen! Truly he is risen!”