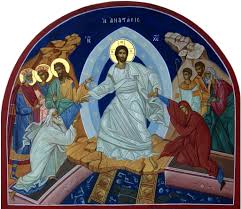 Christ is risen! Truly he is risen!

This next video is the conclusion of the Midnight Office and the Paschal Procession presided over by the Bishop, according to the Russian tradition, at Saint Symeon Church, Birmingham, Alabama. “Christ is risen…” is sung many times, till all the people return to the church. After this, Paschal Matins is sung for an hour or so, followed by the Divine Liturgy. Many parishes then have a “Paschal Feast”, with people often bringing foods from which they fasted during Lent. This all takes a while. A long while. If the celebration begins at midnight and a Feast follows, folks start heading home about dawn – though in some Archdioceses it is permissible to begin a bit earlier if necessary for pastoral reasons.

which is read just before the beginning of the Paschal Divine Liturgy.

If any man be devout and love God, let him enjoy this fair and radiant triumphal feast. If any man be a wise servant, let him rejoicing enter into the joy of his Lord. If any have labored long in fasting, let him now receive his recompense. If any have wrought from the first hour, let him today receive his just reward. If any have come at the third hour, let him with thankfulness keep the feast. If any have arrived at the sixth hour, let him have no misgivings; because he shall in nowise be deprived thereof. If any have delayed until the ninth hour, let him draw near, fearing nothing. If any have tarried even until the eleventh hour, let him, also, be not alarmed at his tardiness; For the Lord, who is jealous of his honor, will accept the last even as the first; he gives rest unto him who comes at the eleventh hour, even as unto him who has wrought from the first hour. And he shows mercy upon the last, and cares for the first; and to the one he gives, and upon the other he bestows gifts. And he both accepts the deeds, and welcomes the intention, and honors the acts and praises the offering.

Wherefore, enter you all into the joy of your Lord; and receive your reward, both the first, and likewise the second. You rich and poor together, hold high festival. You sober and you heedless, honor the day. Rejoice today, both you who have fasted and you who have disregarded the fast. The table is full-laden; feast ye all sumptuously. The calf is fatted; let no one go hungry away.

I hope you have benefited from this Holy Week series. All I know is that in preparing  and writing it I have gained much in my understanding and my heart. It has brought me closer to my dear Lord Jesus, and I’m glad for myself that I did it.

As I said earlier, this was not as much work as it looked, since it was based on Holy Week homilies I’ve delivered over the past thirty years. Please forgive the occasional mis-spellings and errors, since especially late in the Week things get very busy for a priest, as I’m sure you know.

I’ve added two more videos to the Holy Saturday article which I sent out on Holy Friday – regarding the Holy Fire. The original caught the excitement but is somewhat unprofessionally done, shall we say. So I’ve added Reuters new coverage, and a third about the Holy Fire being received in Wichita, Kansas, of all places. So if you tuned in after Saturday morning, go back and check out the new additions. There are also many more available online.

A blessed and holy and happy Pascha to you all. “Let us keep the feast!” The Resurrection of our Lord is all-important, of course, but the return of chocolate is not insignificant…

Week after next:  I haven’t had time to figure that out yet…