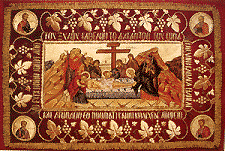 Holy Friday afternoon Great Vespers: the Taking Down from the Cross

For less than a day, from Holy Thursday night to Holy Friday afternoon, the Orthodox crucifix is placed out in front of the icon screen. Otherwise it is normally kept behind the altar, half hidden from view, as if it is too “strong”, too “heavy” for us to yet see it full-strength.

The story of Christ’s Passion and Death is read yet again at length, drawing from the  Gospel accounts. When we come to the words “When Joseph had taken his body, and wrapped it in a clean linen cloth” Matthew 27:59-69, the figure of Christ is removed from the Cross, wrapped in a clean white cloth and placed on the altar.

“The noble Joseph, having brought down thy most pure Body from the tree, wrapped it in fine line, embalmed it with ointments, and laid it in his new tomb.”

On the altar it is then replaced by the Epitaphion, the cloth below which shows the Body of Christ being cared for by his holy Mother, Saint Joseph of Arimathaea, Nicodemus and the Holy Myrrhbearing Women. This is then carried in procession to a beautifully decorated “bier” (“kabuklion” in Greek) standing in front of the icon screen, where we await his funeral tonight.

“Jesus Christ is the power of God, the wisdom of God.” Where is real power to be found? What is true wisdom? Saint Paul isn’t talking theory here; he is describing what had just happened in Christ. What Jesus did on Holy Friday looked at the time like the most ridiculous, most unwise thing imaginable, utter failure. The Messiah came to save the world and instead he let the world kill him. Total weakness, absurd foolishness. And yet Jesus Christ dead, Jesus Christ in his weakness turned out to be stronger than all the powers of this world. Even in the first century Paul saw it happening.

And now 20 centuries later we see it even more clearly. All the great powers of the ancient world, Caesar and his armies and a multitude of nations and empires since then have risen and fallen and vanished, as someday all the great powers of our world will be gone, including our own. And the bullies in so many nations throwing their weight around, ignoring the least of Christ’s brothers and sisters, they will also fade away and be gone, and the sooner the better say I.

But this crucified Man, this failure, this fool as it seemed, today has over two billion followers. The power of Jesus Christ and his Kingdom goes on and on, generation after generation.

Jesus of Nazareth in his apparent foolishness, hanging on the Cross, was wiser than all the wise men of this world. The ancient philosophers and their wisdom are long gone, as today’s ideologies and systems will also someday fade away, as they all do – except for one. For now, 2000 years later, multitudes still hang on the words and wisdom of Jesus Christ, and learn how to truly live, both in this life on earth and in our life to come. People may explain it as they like. But it’s the simple obvious truth.

Paul says “God chose the foolish things of this world to put to shame the wise, the weak things of the world to put to shame the mighty”, “God chose lowly things, things which in the eyes of the world are nothing, to bring to nothing the things that are.” He still does. Here we are: the Church of Jesus Christ alive and well 2000 years later. Not because we’re so powerful or so wise or so virtuous, God knows. What makes the Church endure and will make the Church endure to the End of the Age is not us. It is Jesus Christ. He is “our wisdom, our righteousness, our sanctification, our redemption”. So, as Paul says, let us glory in nothing other than the Cross of Jesus Christ.

Is this a funeral service? Is it a resurrection service? The answers are: Yes.

We stand before the bier on which Christ is laid out before us. On the cloth, the Epitaphion, see his Body lying stone cold dead, and his Mother and Joseph of Arimathaea and Nicodemus and even holy angels mourning. We also sing Lamentations over him. The third stasis (portion) is below.

This follows an ancient Mediterranean custom of women singing laments at peoples’ deaths. Throughout these Lamentations we put the words of lament in the mouth of his Mother, with a few from Joseph. But we do not lament. We need not. We know how this all turned out, don’t we? and there is nothing for us to lament.

Then we process outside following his Body, as all people still do at funerals. We become part of Christ’s funeral procession following him outside the church into the darkness, in symbol into death. Some Orthodox walk three times around the church. Then coming back into the church we all pass under the Epitaphion – one by one, yet all together – in symbol passing through death with Christ, each of us dying with him.

And what do we find as we come out the other side of death? The Church! We are still in the Church! In this life we are with Christ, part of his Church. If we die with Christ where will we find ourselves on the other side of death? Still in the Church! Still with him. Still with the people we love. Christ has broken down the boundaries between heaven and earth, and his Church is a supernatural community which also transcends those boundaries, encompasses heaven and earth.

Brothers and sisters, do not fear death. Death is only a passage. We pray for the “departed” don’t we? our way of saying that when people die they have only left on a journey. And in Christ so they have. And in Christ so will we. And that’s all there is to it.

This is also a victory service. The Resurrection celebration doesn’t come till tomorrow night, but even now we begin to celebrate Christ’s victory. Tomorrow morning we will celebrate the first Divine Liturgy of the Resurrection – well, actually, of Christ’s triumph over death “down below”. Christ has now entered the “underworld”, sheol, the dark place of departed, that “lower dimension”. One translation calls it “the land where all things are forgotten”, where the dead from all times were held captive by Satan and where he intended that they finally fade into nothingness.

But now Christ is driving Satan crazy, rescuing the dead, leading them up into the light, into life again. (We will see that tomorrow night in our Paschal icon.)

At the end of tonight’s service, in the Old Testament reading the question is “Can these bones live?” Ezekiel was asked that in symbol about the “bones” of Israel, their nation laid level by the Babylonians. The answer was yes. But we are asking about real bones, the actual resurrection from the dead. Can Christ arise? The answer is Yes!

Can our bones live? The answer again is Yes! We believe not only in a spiritual afterlife. We believe in the resurrection of the dead. Christ said, Christ promised that at the Last Day all who lie in the tombs will rise. At the End, all good things will be restored. As John said, “We will be like him”, like Christ risen from the dead.

So already tonight we begin to celebrate: “Christ, our Passover has been sacrificed for us. Therefore, let us keep the Feast.”

And at the end we sing of what is coming, what is normally a Sunday Resurrection Troparion: