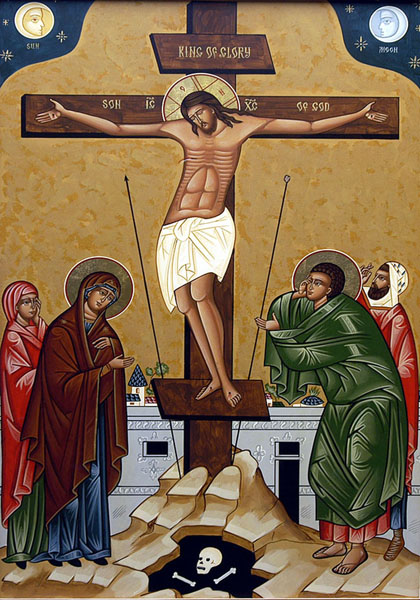 I will not (believe me!) comment on each of these readings, which carry the story from Holy Thursday through Holy Saturday evening. I will say a little to try to explain what was happening, which is sometimes not so obvious. In this conflation of the events I’ll omit much, and hope I have not got anything out of order. Sometimes, as is usually the case, it’s hard to precisely harmonize the Gospel accounts. I’ll try to be brief, so you can get yourself to church this evening.

Picking it up early on Holy Friday morning: Jesus had been captured during the night in the Garden of Gethsemane, and taken in custody and mistreated while waiting for the Jewish Sanhedrin, their high court, to gather. Meanwhile, Simon Peter had thrice denied that he even knew Jesus, then had fled, crying, so ashamed of himself.

So Jesus had been left to face it alone – till later in the day when his Mother Mary, young John and the holy women would bravely stand with him at the foot of the Cross.

The Lord had been condemned to death by the Sanhedrin on grounds of blasphemy, “making himself equal with God”.  (And if he is not who believe he is, if he was a madman, the verdict was correct and the Jewish authorities were not just evil men, as I said on Palm Sunday.) However, Israel was an occupied country, and the Romans forbade them to execute anyone. So they had no choice but to cooperate with the enemy.

The priests took him to Pontius Pilate the Roman governor. The Romans couldn’t have cared less about blasphemy against this peculiar God of the Jews, so the Jewish authorities were forced to lie about Jesus. They gathered a crowd on the Gabbatha,

the pavement in front of the Praetorium, the governor’s palace, telling Pilate that this Jesus was making himself a king, and something needed to be done about it. Pilate understood none of this and probably was irritated by being awakened so early – couldn’t they have mentioned this later in the day?

But he needed to settle things down, so he interviewed Jesus: “You are a king then?” Jesus gave a nebulous answer: “You have said so”. Then he continued, “but my Kingdom is not of this world.” John 18:36  Pilate was perplexed, but saw no threat in this humble, quiet, very unkinglike man. He went out and announced that he found no fault in the man and so he would release him. “No, crucify him!” was the crowd’s response. Now Pilate was more perplexed, so he had him beaten, thinking maybe this would satisfy them. It didn’t. “Why?” asked Pilate, “what evil has he done?” “Crucify him! Crucify him!”

Had the crowd been paid off by someone? Perhaps. However, we also know that even a group of ordinary people, when riled up, can turn into an irrational mob – who would choose a criminal rather than an innocent Man. It had happened before in history. It would happen many times again.

Meanwhile Pilate’s wife sent a message that she had had a dream about this man, so “leave him alone”. Pilate was now at his wits’ end. Now he had not only to settle these unruly incomprehensible people, but also not offend his wife! So he tried again: he had Jesus dressed up sort of like a king. He brought him out. “Behold, the man”, said Pilate. (No truer words were ever spoken. Here was Man brought to fulfillment, completion. No other true Man had ever been born.) Pilate thought surely they will now see that this meek, mild-mannered man is no king. “Crucity him. Crucify him!” “Crucify your king?” asked Pilate, in a half-taunting, half-jocular way, still half-hoping maybe he could work his way out of this.

The Jewish authorities must have been prepared for this, for now they took their lie a step farther: “If you let this man go you are no friend of Caesar’s. Whoever makes himself a king speaks against Caesar.” John 19:12  And now they would blaspheme their God: “We have no king but Caesar” – they whose only true King had always been the Lord God.

Pilate knew he was trapped. What if word got back to Rome that he had let a treasonous man go free? And so, fearing now for his own position as governor… and you know the rest:  “..and was crucified also for us under Pontius Pilate.” If Pilate could have known that that would be his only legacy in a hundred thousand churches 2000 years later… The evidence is that Pilate tried hard to satisfy his conscience – so much so that the Ethiopian Orthodox Church lists him on their calendar at Saint Pontius Pilate! But I don’t think so. We all know many politicians who are willing to lose their honor so as not to lose their jobs. Nor did the rest of Pilate’s life give evidence that he was a saint.

So in the end, the religious men violated their own Law and their conscience. And the politician violated his own conscience and sense of justice.

And both powers, working together, executed the Savior of the World.

A cause to grieve, to mourn? Yes, at how bad, how horrible the world can be.

But NO! This is above all a cause to rejoice! Because the powers of the fallen world have now done their worst: They can’t do worse than kill God in the flesh. And it didn’t work.

Christ arose. He could not be put down. So, despite appearances sometimes, the salvation of the world is now assured. The world can never get rid of God, of Christ our God, or his holy Body which is the Church.

And now Jesus Christ, our God and Savior, will die and enter into hades to do his most important work – to conquer death by death, from the inside, and set free all the dead from all times. And to lead us all into death with him, and through death and out the other side. God so loved the world that he gave his only begotten Son that whoever believes in him should not perish but have everlasting life. John 3:16

Greater love has no man than this, than that he should lay down his life for his friends. John 15: 13

In this is love, not that we loved God but that he loved us and sent his Son to take away our sins. Beloved, if God so loved us, we also ought to love one another. I John 4:10-11