However, we Orthodox have often ignored Saint Ambrose. Why?

First, because he is commemorated on December 7, only a day after the feast of Saint Nicholas of Myra *, who is ultra-popular among us.

And also because he wrote in Latin – and who in the old Orthodox world cared to read Latin? Hardly anybody.

Furthermore, we Orthodox tend to concentrate on saints who lived east of the Adriatic, while Saint Ambrose was Bishop of Milan, Italy, west of the Adriatic. However, he lived long before the Great Schism between East and West, and Roman Catholics and Orthodox share the saints before that rather arbitrary date of 1054. We Orthodox call Ambrose a Church “Father”. They title him a “Doctor” of the Church. We both mean the same thing: Saint Ambrose was a great and trustworthy Teacher of the Faith.

Therefore: “Saint Ambrose of Milan, forgive us Eastern Orthodox for too often ignoring you.” Today let’s give this great, brilliant, courageous man his due.

The early life of Saint Ambrose

Born about the year 340 in Trier (a city in far western Germany) to non-Christian parents, Ambrose received a thorough classical education – literature, law, rhetoric. After his father’s death, he moved with his family to Rome, where he rose rapidly to prominence, and when he was only about thirty years old was appointed governor of Liguria and Emilia, with his headquarters in Milan (Mediolanum). There young Ambrose was known among his people as honest, fair and competent. He was not yet a Christian.

Some say that Ambrose was still pagan and began serious study of the Faith only after he was baptized – actually after he became a bishop! Some say he was already a catechumen. I think the former story was correct, as I’ll explain below.

At this time Emperor Theodosius was about to declare Christianity the official religion of the Roman Empire, and many were joining the Church. However, there was a problem: Christians were deeply divided between Catholics * and Arians – followers of the Deacon Arius who taught that Christ was not truly God but rather had been created by God. The First Ecumenical Council in Chalcedon had settled the matter officially, as spelled out in the first article of the Creed. However, Arianism – despite the fact that it was contrary to the New Testament and to the almost unanimous decision of the Ecumenical Fathers – not only continued but actually grew in popularity. (Why? Well, many things in this fallen world make little or no rational sense. Look around.)

When Ambrose arrived in Milan, Auxentius was Bishop of the diocese – an intelligent man and persuasive speaker, but a devout Arian who had tried hard to suppress the Catholic Faith. When he died, Catholics and Arians were immediately at each others’ throats about who should succeed him. Governor Ambrose, respected as he was for his fairness and honesty, tried to bring peace and settle the two opposing groups. But even he couldn’t solved the problem.

Now, this was the last thing Governor Ambrose had imagined – or wanted. He hid himself away to escape. When the Emperor Valentinian heard of it, he sent out word that any who gave him shelter would be severely penalized. So Ambrose came out of hiding and accepted the inevitable. 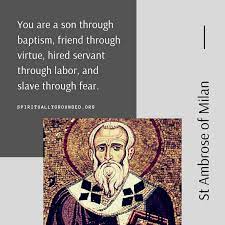 In one week, Ambrose became a catechumen, was baptized, was ordained reader, then subdeacon, deacon, priest, and at the end of the seven days he was consecrated bishop! It was December 7, 374. The new Bishop of Milan was only about 34 years old.

Immediately Bishop Ambrose gave almost everything he owned to the poor and to the Church, and lived in simplicity for the rest of his life. Then he began to immerse himself in the Holy 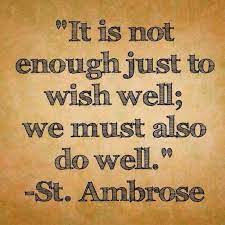 Scriptures and the teachings of the Catholic Fathers (Saint Basil, in particular), and to the consternation of the Arians, there was soon no doubt in anyone’s mind that Ambrose would be a Catholic bishop. He began to teach the Faith according to  First Ecumenical Council and the Holy Scriptures, using terms of pre-Christian philosophy and literature, so that his educated hearers could more easily accept it.

One who listened to him intently was a young man named Augustine from the city of Hippo in North Africa, who had been diligently searching for the truth but couldn’t find it. Saint Augustine * wrote later that he had long been seeking the truth, and that Saint Ambrose showed him the Truth and made him a Catholic Christian. How did Ambrose do it? According to Augustine, not only by his words, but even more by the witness of Bishop Ambrose and his people praying and singing together as one united body.

Bishop Ambrose’s ministry was… well, he reminds me in many ways of my own intimidating patron, Saint Basil the Great, who did all things well. 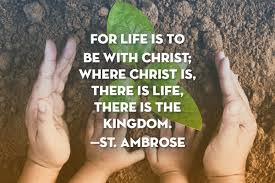 According to Western custom, Ambrose celebrated Mass every day. His teaching and writing was prolific. (Some of his writings are listed at the end of this Post.)

Some examples of Saint Ambrose’s Teachings

1  Like Saint Basil and Saint John Chrysostom he said: “It is not from your own possessions that you are bestowing aims on the poor; you are but restoring to them what is theirs by right. For what was given to everyone for the use of all, you have taken for your exclusive use. The earth belongs not to the rich, but to everyone.”

This is the origin of the popular saying, “When in Rome, do as the Romans do.”

3 “No one heals himself by wounding another.”

4   “If someone offends you, don’t tell anyone about it except your elder, and you will be peaceful. Bow to everyone, paying no attention whether they respond to your bow or not. You must humble yourself before everyone and consider yourself the worst of all. If we have not committed the sins that others have, perhaps this is because we did not have the opportunity – the situation and circumstances were different. In each person there is something good and something bad; we usually see only the vices in people and we see nothing that is good.”

5   “Let your door stand open to receive Him, unlock your soul to Him, offer Him a welcome in your mind, and then you will see the riches of simplicity, the treasures of peace, the joy of grace. Throw wide the gate of your heart, stand before the Sun of the Everlasting Light.”

7  “As in paradise, God walks in the Holy Scriptures, seeking man.”

8  Ambrose taught so often about the value of virginity that once he was accused of holding down the population of Milan! In response, he asked if there were any young men present in congregation that day who had any difficulty finding a wife. None held up their hands. 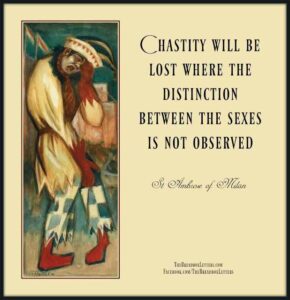 Saint Augustine reported that daily there was a long standing line of people – old and young, rich and poor, powerful and ordinary, even pagans and Arians –  waiting to receive counsel and comfort from their Bishop.

Saint Ambrose’s popularity protected him from the Arians who wanted to force him out of his diocese. He refused to allow Arianism to be taught in his diocese, and prevented Arian bishops from being imposed in his part of Italy. When in the year 386 the Western Emperor and his mother Justina demanded a church building in Milan for use of the Arians, Augustine relates that “the devout people watched, ready to die with their Bishop.” The royals backed down.

Bishop Ambrose was courageous. That word understates it. He had “guts”. Let me quote from what I wrote three weeks ago:

“Ambrose publicly chastized Emperor Theodosios the Great (whose theology was firmly Orthodox) over a moral issue: Theodosios had given approval to the massacre of over 7,000 innocent people of Thessaloniki. Ambrose wrote to him: ‘What has been done at Thessaloniki is unparalled in the memory of man… temptation has overtaken you… You, who have so often been merciful and pardoned the guilty, have now caused many innocent to perish…’ Ambrose forbade Theodosios to receive the Eucharist till he repented.” A popular account says Bishop Ambrose stood at the door of his cathedral and refused the Emperor entry. Theodosios repented, publicly. (I can think of people today who might take a lesson from Saint Ambrose.) In the end Bishop Ambrose became spiritual father to Emperor Theodosios. He ministered to him on his deathbed, and preached a moving sermon at his funeral.

Saint Ambrose reformed liturgical practices at Milan. To this day the “Ambrosian Rite”, which is used in the region around Milan and in southern Switzerland, differs in some ways from the “Roman Rite” used in the rest of the Roman Catholic Church.

Ambrose composed numerous hymns, some of which are sung today in traditional Roman Catholic and Anglican churches. The magnificent Te Deum Laudamus is traditionally ascribed to Saint Ambrose. (I wish we Orthodox could sing it.)

sung by The Cistercian Monks of Stift Heiligenkreuz Abbey in Austria

Very much more could be said about the great Saint Ambrose of Milan.

All in all, in his 23 years of faithful ministry, Saint Ambrose turned a deeply divided diocese into a unified exemplar of Catholic Faith and left a great written legacy for future generations.

Saint Ambrose of Milan departed this mortal life on April 4, 397. He is commemorated on December 7, the day he was consecrated bishop, in order not to conflict with Holy Week and Easter. His chief relics lie today in the Basilica Cathedral of Sant’Ambrogio in his see city of Milan.

One more thing: Ambrose is listed as “patron saint of bees, beekeepers and even candle makers (because good candles are made of beeswax). In his iconography, he is often depicted with bees or a beehive”.

Bees?! I looked it up: “In ancient mythology across all cultures, the honey bee was believed to be the sacred insect that bridged the natural world to the underworld. A universal symbol of ethical virtues, such as diligence, sociability, purity, cleanliness, wisdom and creativity.” That’s Saint Ambrose, alright.

Saint Ambrose is much read these seventeen centuries after his departure.

A Few of Saint Ambrose’s writings

Scriptural Exegesis: The Six Days of Creation, On Paradise, On Cain and Abel, On Noah, On Abraham, On Isaac and the Soul, On the Good of Death, On Flight fro the World, On Jacob and the Happy Life, and more

Moral and Ascetical Commentary: On the Duties of Ministers, On Virgins, On Widows, On Virginity, An Instruction to a Virgin, In Praise of Virgininty

Dogmatic writings: On the Faith, On the Holy Spirit, On the Sacrament of the Lord’s Incarnation and more

Do you want to take on a really challenging New Year’s project?  Amazon offers “The Complete Works of Saint Ambrose” in eleven volumes, print length: 3837 pages.

(And I was impressed with my little Blog…)

Next Week: More Music for the Nativity of Our Lord

Week after Next: How Jesus changed the World

One thought on “360. A Saint too great to be ignored: Ambrose of Milan”