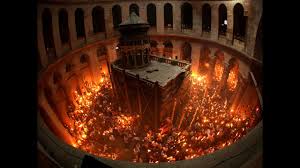 I meant to have this published last night before the Liturgy. Forgive me for being late.

Brothers and sisters, there is a whole lot going on this morning. Follow closely.

This Liturgy begins as a celebration of Christ’s victory over Satan and death “down below”, and by the end we’re proclaiming the Resurrection here “up above”. In the two hours or so in between, many things happen – and I have discovered that these vary a little from archdiocese to archdiocese and parish to parish. Oh help. It can all be a bit confusing. But after thirty years I think I’m beginning to figure some of it out. So here goes:

Anciently this morning’s service was the beginning of the Paschal Vigil which began probably late afternoon on Holy Saturday and ended after dawn Pascha morning. Judging by my short time on Mount Athos, I suspect this is still the case there. But for the sake of us “wimps”, long ago the parish Vigil was greatly abbreviated into only about five hours, and separated into two parts. The first comes in this morning’s Liturgy  – which (because it once began in the evening) explains why it is still a Vesperal Liturgy. The rest of it comes late tonight in the midnight Resurrection service, Paschal Matins and the Paschal Divine Liturgy, which goes on well into the early morning hours.

Are you following so far? We’re just getting started.

During the ancient Vigil there were many Baptisms, for many people were becoming Christian. These were required to take place outdoors by immersion. The Baptisms were in “living water” – see John 7:37-39 –  which in April even in the Mediterranean world must have been very cold! Those being baptized were naked, as a sign of totally leaving their old pagan life behind. Men and women were separated, men baptized by deacons, women by deaconesses – just in case you wondered.

Meanwhile the Vigil continued in church. The newly baptized would be dressed in white robes and would process into church, as all sang “As many as have been baptized into Christ have put on Christ”. They were welcomed into the community, saw the celebration of the Anaphora for the first time (!), and received their first Holy Communion as the sun was rising in the east, and as the Light of Christ was rising in their hearts. We can only begin to imagine how overwhelming it was, how profoundly it was imprinted in their hearts and souls, and  of all present as they recalled their own Baptisms. This is why we still sing “As many as have been baptized…” at Baptisms as the newly baptized go from the baptismal font to the soleia (before the iconostasis) to receive their first Eucharist. We sing it also at the Divine Liturgy on days on which Baptisms took place in the early Church.

In the stichera early in this Vesperal Liturgy, the devil wails: I should never have taken Him in. I’ve lost my captives. I’m defeated. For today, “down below”, the victory has been won. Christ has gone into death, into the darkness, the devil’s kingdom, and has broken down the gates of hades and “harrowed hell” (as some have described it), and led the captives out into His Light. Now it is clear, looking back to yesterday, that ultimately it was not “the world” which killed Christ. It was Satan. And it didn’t work. It was Satan who lost. Now death has been defeated from the inside, by dying! As we will sing tonight and again and again through the great Forty Days, “Christ has trampled down death by death and upon those in the tombs bestowing life”.  Our God is stronger than death.

Tonight our Paschal icon will show the hinges and bolts of the doors of hades and of death flying in all directions, so they can never be put back together, and we can see Jesus Christ leading the dead of all times, now the “formerly dead”, up out of the darkness into the Light. Oh, let’s cheat and take a quick peek: Now, let’s take a little detour, lest anyone be confused. Do we Orthodox believe that hell is literally “down below” and that its gates had hinges? No. No more than we think Heaven is up there in the clouds somewhere. Nor do I think that is what the early Christians believed. We live in a literalist world. They understood symbolic imagery. May I try to express this “scientifically”, albeit inadequately? In relation to our world, Heaven is a series of “higher dimensions” into the Light. A series? Because Paul spoke of “the third heaven”, presumably out of seven, and above and beyond even that is Eternity and infinity where dwells the inaccessible God who is completely beyond words, or was till His Son became Incarnate. Hell likewise is a series of “lower dimensions” leading ever further into the darkness and finally utter nothingness. There is where Satan once held his

captives, to, as one Psalm translation dreadfully puts it, “the land where all things are forgotten” – I know I also mentioned that yesterday, but those words just haunt me – where we just fade away into nonexistence. That is where death once took us, into what Satan had prepared for all who died.

But death is not of God. Death is of Satan. Our God is the God of life. After we had sinned, God accepted our deaths, because otherwise we would have gone on forever in sin, That’s the story of the Garden of Eden. But then Christ came and entered into death, and destroyed death by His death.

Back to the Liturgy:

Another theme: One of the stichera this morning says that today “is the Blessed Sabbath” which Moses foresaw, the seventh day of the week when Christ our God rested in the tomb from His labors, as once He rested on the seventh day after He created the world. And now will come an Eighth Day! the First Day of a new and greater and eternal Creation, the renewal, completion and fulfillment of the first creation.

In this Holy Saturday morning Liturgy, there are fifteen, count them fifteen, readings from the Old Testament. (Well, I must confess that many churches don’t do all of them.) Will we look at all of them here? No! But the point of them is that all the Old Testament prefigures Christ and His new Creation in one way or another.

Well, because you begged, just one example: We read the story of the Exodus, because this is our new Passover. I’m sure you know that the word Pascha itself means Passover. Greek Orthodox wish each other “Kalo Pascha”, “Happy Passover”! Christ is our new Paschal Lamb. At the Exodus the angel of death passed over the Hebrews. Moses then led the people up out of slavery in Egypt, through the Red Sea water (I trust this is not Chaleton Heston), through the desert, where God provided them manna to eat, and to their promised land. So we sing with the Hebrews “God has triumphed gloriously!” Christ is our new Moses, and this our new Exodus. He leads us up out of slavery to sin and death through the waters of Baptism, feeds us with new Manna of the Eucharist, and through the desert of this life towards our true Promised Land on high. Christ our God has triumphed gloriously.

Now let’s move way ahead: Early in this Liturgy, the clergy are still vested in the violet of Lent, till before the Gospel they are re-vested in white. Then the Priests sprinkle bay leaves (laurel leaves) and flower petals all about the church. Laurel leaves crowned the heads of victors in the ancient games. With laurel leaves and flowers we prepare the way for Christ the Victor.

When I was a new Priest – chrismated one day and ordained the next, which I may explain someday – I had never seen this Liturgy, and when I read the instructions I was startled. My mother taught me never ever to throw things around like this indoors, and when I scattered the leaves all over the place I felt very guilty! and one of my former Episcopalians looked totally aghast. But it was great fun! It still is.

Speaking of which, here is a very enthusiastic Greek priest. I wish the audio would come through better.

And then, even though we’re not quite “there” yet, the Resurrection Gospel from Saint Matthew is read (see way above) which covers the whole Forty Days from His rising to His Ascension.

Yet another subject: In Jerusalem this morning, the Patriarch brings the Holy Paschal Fire out from Christ’s Holy Sepulchre into the Anastasis, the ancient Church of the Resurrection. Below the Holy Sepulchre is in the middle.It is shared through the church, then taken to local churches so be brought out to the people at the beginning of the midnight Paschal Liturgy. This being the modern world, the Fire is now flown (very very carefully) to many places including Greece, Eastern Europe including Russia and the Middle East – and at least once to Wichita, Kansas! (See way below.) Middle Eastern and  European media cover this every year. Even the BBC. A few American media are now catching on.

And now i’m glad this Post is late, because I just found this morning’s account from Reuters.

Now, listen closely: For centuries, the Paschal fire has lighted spontaneously in the Sepulchre – sometimes even doing so among the congregation before the Patriarch can bring it out. Seriously! This has been reported for well over a thousand years. For much information see: http://www.holyfire.org/eng/index2.htm  I first looked at this with great skepticism, but unless you want to think that all these centuries there has been a continuous, undetected, conspiracy by liars, and nobody has ever “squealed”, ever gave away the secret, not even once… Really?

If you want a quiet, dignified Pascha, the Church of the Anastasis is not the place. This video is very unprofessional, but it gives you a good sense of the excitement.

And now from Kansas:

I warned you there is a lot going on today.

Jesus Christ has already won the greatest victory down below, and Saint Matthew has told us what is coming here on earth. It’s no secret – hasn’t been for 2000 years.

Which means no chocolate or pepperoni pizza for me till tonight. Can I hang on for just a few more hours…?