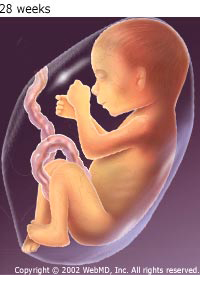 In this Part, we’ll cover 1 What is a Person? 2 The Scriptures on Abortion, 3 The Church Fathers on Abortion, 4 What Science tells us about the Unborn Child

This is a difficult issue (especially for those of us who tend not to be politically conservative *) and a difficult article to write, so I’ve tried to choose my words carefully. Please read carefully.

For much of American history, each African American was legally considered 3/5 of a person. To the right: once a partial person.

In 1889 the U.S. Supreme Court ruled that corporations (for example, Starbucks) have the rights of persons. In

January 2010 the Court ruled further that political contributions are the same as free speech, and so on the grounds that the Bill of Rights guarantees no limits on free speech (like to yell “Fire!” in a theater?!) there can therefore be no limits on political contributions. This means that, acting as “persons”,  wealthy corporations can legally drown out the speech of actual individual persons. States Supreme Court recognized women’s Constitutional right to abortion. In 2018 the Supreme Court ruled further that unborn babies (right: at seven or eight months) have the right to be born, but no guaranteed right to protection from mistreatment (including abortion) before birth.

I am no lawyer. Please tell me if I have got any of this wrong. But the point I’m making here is not a legal one. It’s  this: All the above has debased our modern concept of personhood.

No wonder people are so confused. Is this part (not all) of what lies behind today’s seemingly casual attitude towards abortion? as if it were only a legal or political issue? This has led to a lot of yelling and screaming and people being backed into corners on all sides. And whatever the cause, since 1973 there have been at least 50 million abortions in the United States – out of a total population of about 300 million. That’s a lot of killing, brothers and sisters.

What I’m concerned about in this article is our attitude towards abortion. For abortion is above all not a legal or political issue but a moral one. And a matter of human decency and respect for life. That, especially…

Did you know that Norma McCorvey, the real name of the Jane Roe in the Roe v. Wade decision, is now anti-abortion? Why? She wrote, “I looked at a fetal development chart…. I had a lot of emotions stirring up inside of me. That’s when I decided that it was wrong in any stage of pregnancy.” * She was arrested some years ago while protesting abortion.

* September 18, 2020. If anyone is still reading this old Post, McCorvey confessed before her death that she had been in need of money and had been paid by “Right to Life” people to oppose abortion. So there we are…  See: https://www.usatoday.com/story/entertainment/tv/2020/05/21/aka-jane-roe-fx-norma-mccorvey-paid-speak-against-abortion/5236476002/

In Luke chapter 1, Saint John the Baptist is recognized as a person before his birth: Saint Elizabeth cried “the babe leaped in my womb for joy” when the Mother of her Lord came to visit her.  There are also Old Testament verses such as Jeremiah 1:5: “Before I formed you in the womb I knew you.” But, unless I’ve missed something, that’s about it. Explain it as you will, abortion is nowhere specifically condemned in the Holy Scriptures.

So when modern Protestant “Bible alone” Christians are militantly anti-abortion, they are not getting it from the Bible! It’s coming from somewhere else.

Orthodox Christianity is not based on “Bible alone”. Nevertheless, we do believe that the Holy Scriptures are the first and primary witness to Apostolic Faith, and the Scriptures are not focused on the subject of abortion. So as we consider this topic, I’d like to suggest that we try to keep some Biblical perspective and balance about abortion.

The Teaching of the Church about Abortion

Please don’t misunderstand what I just said. From the first century on, the Orthodox Church has said that abortion is a grave evil. In one early Christian document after another, abortion is condemned. This was a new thing in the ancient world. I think it must have been based on prayer and contemplation on the meaning and value of human life in light of Something new: the Incarnation of our Lord Jesus Christ in the womb of his Mother.

In the Didache, the very early Teaching attributed to the Apostles, various moral directions are given. In addition to Do not murder, Do not steal, Do not bear grudges, Do not be greedy or arrogant, it adds “Do not murder a child by abortion or kill a newborn infant”. The Epistle of Saint Barnabas directs, “You shall not kill the child by abortion or destroy him after he is born”. When Christians in the second century were accused of murdering and eating infants *, here was the defense given by Athenagoras of Athens. “…when we say that those women who use drugs to bring on abortion commit murder, and will have to give an account to God for the abortion, on what principle should we commit murder? For [if we] regard the very fetus in the womb as a created being, and therefore an object of God’s care, [how] when it has passed into life [could we] kill it?”

* Rumor among pagans was that Christians immersed children in water where they were said to die, and then it was known that they ate somebody’s body and blood. so the conclusion was obvious… Imagine what today’s  internet rumor mongers would do with this one!

There is always the danger of taking quotations out of context or neglecting the fact that the Fathers weren’t infallible – and that they may have changed their approach as time went on. However, it appears that this teaching about abortion was taken for granted by early Christians.

Saint Basil and Saint John Chrysostom both held that abortion was the equivalent of murder. However later Saint Augustine of Hippo (who is on our Orthodox Church calendar of saints) believed that abortion was less serious before the “ensoulment” of a child, which took place at an undefined time after conception. And still later in the West Thomas Aquinas held that abortion before quickening was not so bad as murder.

However, the Church has never at any point in history authorized a funeral service for unborn babies who have miscarried, even in late term. In very recent years, some priests have unofficially offered memorial services as a pastoral comfort for the parents. But that’s all.

Here are recent statements by the American Orthodox Assembly of Bishops:    http://orthochristian.com/119079.html   /   https://oca.org/news/headline-news/assembly-of-bishops-issues-common-statement-on-sanctity-of-life    They condemn abortion and urge social services for expectant women, but nowhere do they define abortion as murder. Is this because to say that in our legalistic society would require criminal prosecution of women who have abortions?

So what exactly does the Church teach about unborn babies?

Regarding abortion, should we not take into consideration not only the ancient Fathers but also modern scientific discovery?

Is it relevant that in ancient times it was believed that the entire human being was contained in the male seed? that women were only receptacles? Now we know that the baby is the product of both man and woman.

We now know that before implantation

(and apparently for a short time after) the zygote, the un-implanted cells, can sometimes merge and divide. This suggests that during this time the individuated person does not yet exist. Does this leave room for discussion about certain means of birth control which some consider to be abortion? And also about fetal stem cell research, which can save the lives of persons who have already been born? Fetal cells are now used less and less for research, thank God, for even the un-implanted cells are human life. The Church teaches us to treasure the person from before the beginning to after the end. That is why we don’t even permit cremation, except in the most extraordinary circumstances with the bishop’s permission. The person (soul, mind and body) is the gift of God, to be reverenced and honored, not destroyed.

We now know that from implantation, at least, the individual baby has his or her own unique DNA, and that by about day 15 the baby’s heart begins to beat. How can it be argued that this is not a human being? How can people not be horrified by abortion? Actually, I think most people are.

But what if the woman is alone and desperately poor, with no health insurance (hospital childbirth in America today costs about $3500), with no way to support herself while also taking care of the baby, feeling trapped? Maybe she shouldn’t have got herself into this situation, but she did and there she is… What then?

Next Week: Abortion, Part Two – 1 How the Orthodox Church deals with Abortions, 2 How should we apply Orthodox principles to Society, 3 Being consistently Pro-Life

Week after Next: How the Church prepares us for Lent