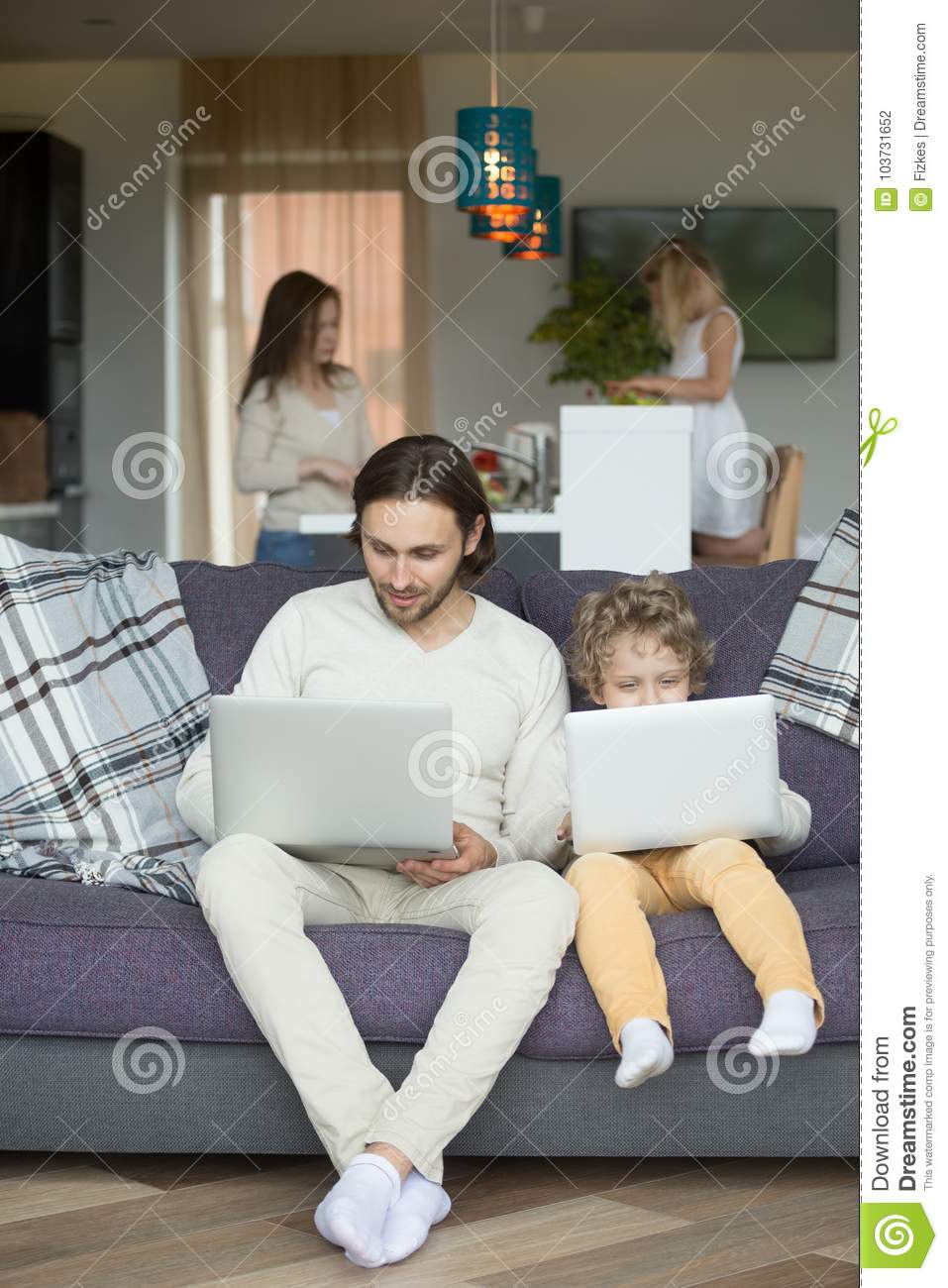 I remember a little boy years ago: His father would sit in his chair, and the boy would sit in his chair. His father would cross his legs, and the boy would cross his legs. His father would turn the page of his newspaper; and his son would turn the page of his book. As time went on his father got so busy with his work that he left before the kids got up in the morning, got home after they went to bed, and the boy rarely saw him. His son also imitated that. After he grew up he moved far away, and after that his father rarely saw him.

The Role of Fathers

Fathers’ Day is observed in both the United States and Canada on the third Sunday of June. It is not a Church holy day. But fathers are holy – created by God as part of the system that requires both a father and a mother to produce children, to have a family. That’s obvious.

marriage of a man and a woman is the normal pattern for the family. Almost anything is better than children growing up unwanted as orphans, so I think we should allow other possibilities, but this is the family as God created it

It should also be obvious (but apparently is not these days) that children need 2 parents. Partly for practical reasons: God bless single parents who through no fault of their own must raise children by themselves, and I’ve known some who have done a very fine job of it. But that’s extremely hard to do.

Equally important, children need fathers. I don’t mean to devalue mothers – far from it! – but the subject today is fathers. Boys need good fathers to imitate. I think the chief (but not only) reason many boys go bad these days is that they have had no father at home. A boy needs a father to emulate, so he will learn how to be a good man, how to take the macho male thing that many young men have and channel it, get it under control and use it for good. (By the way, over the years I have seen many very wiggly boys gain self-control by serving as acolytes/altar boys.) A boy needs to see in his father what true manliness is, how to be strong yet gentle and loving. *

Likewise I think girls need good, loving fathers to help them know how to relate to men, and seek the right kind of husband. And most important, good fathers give boys and girls alike a positive image of God, God the Father.

Men and Women in recent times

When I was young, women were often put down. I think of some of the nasty stereotypical things men used to say about women –  incompetent “women drivers” and the like.

On television in those days, we old people remember “Mrs. Olsen, my stupid wife makes horrible coffee”, and similar things. Men and fathers were usually portrayed as solid, wise and intelligent.

“Father Knows Best”, “Ozzie and Harriett” from 50 years ago seem kind of hokey now (did these families never have any real problems?) but the man always came off well,.

Then we went through a period when women came into their own. (And I’m all in favor of that. When I see intelligent well-spoken capable women on TV news or in politics, I’m sad for all the feminine talent that was once wasted. America has been way behind many

nations in this regard.) But at that time fathers and men were often put down or ignored. I think of the commercials where the men were portrayed as weak or goofy, and women alone solved the problems. Some years ago I went into a book store here in Cedarburg. The shelves for “women’s studies” were filled with books; the shelf for “men’s studies” had 1 book. One! I think things are more balanced now. However, unless I’m mistaken, these days few TV shows portray any kind of traditional family.

What ever happened to fathers? We’re still here. But we need some guidance and some attention, too.

The Theology of Fatherhood

Some say that people created God the Father in the image of human fatherhood. That is not the way it happened. In the Old Testament there are a few references to God being like a father. In Greek and native American mythology there were father gods who ruled within the celestial realm.

But our God is above the heavens. He created all things. Stand outside on a clear night.

Look up into the heavens (if you can find a place without light pollution), the billions upon trillions of stars and galaxies stretching out into the unfathomable distance. Then think of the One who stands behind it all, who keeps it all going – this universe and maybe billions more universes beyond our time and space. Try to imagine God who was before all time, who will still remain after all the lights of the cosmos go out, who dwells in timeless eternity, in approachable light, “whom no man has seen or ever can see”  – and I ask you: Would you even then think of saying, ‘Why that’s just like my father. Hi, Dad.”

We call God our Father because His Son Jesus Christ taught us to – to “dare to pray Our Father”. We call God our Father because the only begotten Son of God has made us his brothers and sisters by Baptism. Indeed Jesus said we should call this unimaginably great God “Abba/ Daddy” of all things! He taught us – it hardly seems possible – that the infinite One, the Creator of all loves us, cares about each of us individually: Not a sparrow “will fall to the ground apart from the will of your Father. Even the very hairs of your head are numbered. So do not fear; you are of more value than many sparrows.”  Matthew 10:29-31 We believe God is our loving Father because Jesus said so.

The Theology of fatherhood

there’s something basic here. In a way we fathers should be distant like God. We should not be buddies to our little children. There should be no question who’s in charge. But fathers should also be close to their children, “there” for their kids, as we say – loving them always, never turning away, always available, “Abba, Daddy”. And in fact we already are “like God”, created in his image.

How to do it right? The key is found, as in all things, in our Lord Jesus Christ. On Holy Thursday night, the apostle Philip said to him: Just one thing “and we shall be satisfied. Lord, show us the Father.” Jesus said to him, “Have I been with you so long, and yet you do not know me? He who has seen me has seen the Father.” John 14:9 Jesus Christ is the image of God the Father.  In Jesus we see the Father. Not the depths of the Father’s Being – that we will never see – but Christ shows us the character of God, what the Father is like. So, you fathers, if you want to know how to be like God the Father, learn from Jesus. Every day pull out your Bible or go online, and read the Gospels. Know the life of Jesus inside and out. Learn from him and become like him.

Learn from him how to be “lord” of our children but not aloof – like Jesus the Lord of all who walked the roads with his disciples, ate and drank with them, was there with them. Like Jesus who taught them to love children: “Let the children come to me.” Matthew 19:14 Like Jesus who set the highest standards, didn’t make it easy for them, yet was never harsh when people failed. To the woman caught in adultery: “Neither do I condemn you”, then “Go and sin no more.” Like Jesus who showed us the way. Fathers, how we live counts for more than what we say. (When I was young I wished my father had taught me more verbally. He did sometimes but not often. After he died I realized he had shown me how to do it. I wish I had appreciated that more and told him so.) Like Jesus who died for us.  Fathers, lay down your life for your children. You begat them, didn’t you? Then your life is no longer your own.

Here is a final thing our sons need to learn from us. It’s about how men should treat women. I said the following to our men at Saint Nicholas, Cedarburg, after the election of oh-I-can’t-remember-who, because I thought it needed to be said. It is even more relevant today in light of all the revelations about men harassing women – in entertainment, in government, in business, seemingly everywhere. We need to teach our sons this: Repulsive demeaning talk about women, denigrating women, putting down women, mistreating women – this is absolutely wrong, anytime, anywhere. It does not make you more of a man, it makes you less of a man. Fathers, do not lust after other women, after porn stars, after anyone. Infidelity in marriage is wrong, adultery is wrong. Be absolutely faithful to your wife.

Love and respect and cherish your wife. If there are problems, do

everything you can to make your marriage work and hold your family together. (I know this isn’t always possible.) Stand strong in Christian behavior, in honor, decency, moral purity. Do what is right, even when others do not. Just because morals in our country have gone down the sewer, we don’t have to jump in with them. And if you fail, repent, confess, and stop doing it. Don’t say it’s ok, everybody does it. They do not. There are still a huge number of honorable men in our country, in our Church. I have been privileged to know many of them. Show your sons how to honor and respect women.

Fathers, from the beginning to the end of their lives, our sons will learn from us whether we intend it or not, they will imitate us whether they intend to or not – for better or for worse. As I said, we will never be more than imperfect images of God our Father. But we can try, we can grow, we can learn, we can change for the better. And that, I think, is the most important thing we can teach them: how to grow and become better men, better fathers.

God bless all of you fathers who try to be decent men, loving men, faithful men, good husbands to your wives, good fathers to your children. Your reward will be great in heaven.

Week after Next: Orthodoxy and Other Faiths – Modern Protestantism and how it got this way