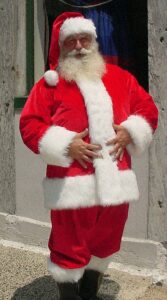 And now you know why Santa Claus is dressed in red.

Both President Obama and Governor Romney have had to repeatedly address their views about an itinerant rabbi who lived 2000 years ago.  But why does anyone care?

Yale historian Jaroslav Pelikan * wrote, “Regardless of what anyone may personally think or believe about him, Jesus of Nazareth has been the dominant figure in the history of Western Culture for almost 20 centuries.  If it were possible, with some sort of super magnet, to pull up out of history every scrap of metal bearing at least a trace of his name, how much would be left?”  It turns out that the life of Jesus is a comet with an exceedingly long tail. Here are some shards of his impact that most often surprise people:

Children In the ancient world children were routinely left to die of exposure, particularly if they were the wrong gender (you can guess which was the wrong one); they were often sold into slavery.  Jesus’ treatment of and teachings about children led to the forbidding of such practices, as well as orphanages and godparents.  A Norwegian scholar named Bakke wrote a study of this … simply titled: When Children Became People: the Birth of Childhood in Early Christianity.

Education  Love of learning led to monasteries, which became the cradle of academic guilds. Universities such as Cambridge, Oxford, and Harvard all began as Jesus-inspired efforts to love God with all one’s mind.  The first legislation to publicly fund education in the colonies was called The Old Deluder Satan Act, under the notion that God does not want any child ignorant.  The ancient world loved education but tended to reserve it for the elite; the notion that every child bore God’s image helped fuel the move for universal literacy.

Compassion  Jesus had a universal concern for those who suffered that transcended the rules of the ancient world.  His compassion for the poor and the sick led to institutions for lepers, the beginning of modern-day hospitals.  The Council of Nicaea decreed that wherever a cathedral existed, there must be a hospice, a place of caring for the sick and poor.  That’s why even today, hospitals have names like “Good Samaritan,” “Good Shepherd,” or “Saint Anthony.”  They were the world’s first voluntary, charitable institutions.

Humility  The ancient world honored many virtues like courage and wisdom, but not humility. People were generally divided into first class and coach.  “Rank must be preserved,” said Cicero; each of the original 99 percent was a “personis mediocribus”. *  Plutarch wrote a self-help book that might crack best-seller lists in our day: How to Praise Yourself Inoffensively.  Jesus’ life as a foot-washing servant would eventually lead to the adoption of humility as a widely admired virtue.  Historian John Dickson writes, “it is unlikely that any of us would aspire to this virtue were it not for the historical impact of his crucifixion… Our culture remains cruciform long after it stopped being Christian.”

Forgiveness  In the ancient world, virtue meant rewarding your friends and punishing your enemies.  Conan the Barbarian was actually paraphrasing Ghengis Khan in his famous answer to the question “what is best in life?” — “To crush your enemies, see them driven before you, and hear the lamentations of their women.”  An alternative idea came from Galilee: what is best in life is to love your enemies, and see them reconciled to you.  Hannah Arendt, the first woman appointed to a full professorship at Princeton, claimed, “the discoverer of the role of forgiveness in the realm of human affairs was Jesus of Nazareth.”  This may be debatable, but he certainly gave the idea unique publicity.

Humanitarian Reform  Jesus had a way of championing the excluded that was often downright irritating to those in power.  His inclusion of women led to a community to which women flocked in disproportionate numbers.  Slaves–up to a third of ancient populations–might wander into a church fellowship and have a slave-owner wash their feet rather than beat them.  One ancient text instructed bishops to not interrupt worship to greet a wealthy attender, but to sit on the floor to welcome the poor.  The apostle Paul said: “Now there is neither Jew nor Gentile, slave or free, male and female, but all are one in Christ Jesus.”  Thomas Cahill wrote that this was the first statement of egalitarianism in human literature.  Perhaps as remarkable as anything else is Jesus’ ability to withstand the failings of his followers, who from the beginning probably got in his way at least as much as they helped.  The number of groups claiming to be ‘for’ Jesus are inexhaustible; to name a few: Jews for Jesus, Muslims for Jesus, Ex-Masons for Jesus, Road Riders for Jesus, Cowboys for Jesus, even Atheists for Jesus.

The one predictable element of this fall’s U.S. presidential campaign is that it will be called “the most important election of our time.” As the last one was called, and the next one will be.   Meanwhile, the unpredictable influence of an unelected carpenter continues to endure and spread across the world.

On the Night of Nativity

Pure is the present night, in which the Pure One appeared, Who came to purify us.

Let our hearing be pure, and the sight of our eyes chaste, and the feeling of the heart holy, and the speech of the mouth sincere.

The present night is the night of reconciliation; therefore, let no one be wroth against his brother and offend him.

This night gave peace to the whole world, and so, let no one threaten.  This is the night of the Most Meek One; let no one be cruel.

This is the night of the Humble One; let no one be proud.

On this day of tranquility, let us not become agitated by anger.

Today God came unto sinners; let not the righteous exalt himself over sinners.

Today the Most Rich One became poor for our sake; let the rich man invite the poor to his table.

Today we received a gift which we did not ask for; let us bestow alms to those who cry out to us and beg.

The present day has opened the door of heaven to our prayers; let us also open our door to those who ask of us forgiveness.

Today the Godhead placed upon Himself the seal of humanity, and humanity has been adorned with the seal of Godhead.

Oh, we have learnt to peer and pore
On tortured puzzles from our youth,
We know all labyrinthine lore,
We are the three wise men of yore,
And we know all things but the truth.

We have gone round and round the hill
And lost the wood among the trees,
And learnt long names for every ill,
And served the mad gods, naming still
The furies the Eumenides.

The gods of violence took the veil
Of vision and philosophy,
The Serpent that brought all men bale,
He bites his own accursed tail,
And calls himself Eternity.

Go humbly … it has hailed and snowed …
With voices low and lanterns lit;
So very simple is the road,
That we may stray from it.

The world grows terrible and white,
And blinding white the breaking day;
We walk bewildered in the light,
For something is too large for sight,
And something much too plain to say.

The house from which the heavens are fed,

The old strange house that is our own,
Where trick of words are never said,
And Mercy is as plain as bread,
And Honour is as hard as stone.

Go humbly, humble are the skies,
And low and large and fierce the Star;
So very near the Manger lies
That we may travel far.

Hark! Laughter like a lion wakes
To roar to the resounding plain.
And the whole heaven shouts and shakes,
For God Himself is born again,
And we are little children walking
Through the snow and rain.

Week after Next: The extremely important Gospel story that we never hear in church

2 thoughts on “362. 1) From Saint Nicholas to Santa Claus in five images, 2)  Six Surprising Ways Jesus Changed the World, 3) Nativity Poems by Saint Ephrem the Syrian and by G K Chesterton”