Brothers and sisters, there is a whole lot going on this morning, so pay attention.

This Liturgy begins as a celebration of Christ’s victory over Satan and death “down below”, and by the middle we’re celebrating the Resurrection here on earth, even though it hasn’t happened yet. (Although of course it has, and we all know that.)

In the two hours or so in between, many things happen. I have discovered that these vary a little from archdiocese to archdiocese and even parish to parish (I don’t know why), so It can be a bit confusing. But here goes:

Anciently this morning’s service was the beginning of the Paschal Vigil which  began probably late afternoon on Holy Saturday and ended after dawn Pascha morning. Judging by my short time on Mount Athos, I suspect this is still the case there. But for the sake of us “wimps” out here in the world, long ago the parish Vigil was greatly abbreviated into only (!) about five hours, and separated into two parts. The first part comes in this morning’s Liturgy. Because it once began in the evening, it is still a Vesperal Liturgy. The rest of it comes late tonight in the midnight Resurrection service which goes on well into the early morning hours.

Are you following so far? We’re just getting started.

During the ancient Paschal Vigil there were many Baptisms, for many people were becoming Christian and being baptized “into Christ’s Death and Resurrection”.  These took place outdoors in “living water” – see John 7:37-39 –  which in April even in the Mediterranean world was still very cold! Those being baptized were naked (like the guy below), as a sign of totally leaving their old pagan life behind and starting afresh. 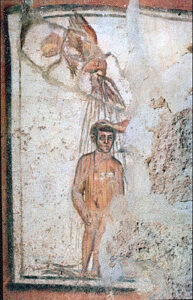 Men and women were baptized separately – men by deacons, women by deaconesses – just in case you wondered.

Sorry, folks, no sprinkling. The Greek verb βαπτίζω, “vaptizo”, means “immerse”. They “drowned” their old life, and arose out of the water to new life in Christ.

Ancient mural. The anointing here is from Heaven.

Meanwhile the Vigil was continuing in church. The newly baptized would be dressed in white robes and then process into church, as all sang “As many as have been baptized into Christ have put on Christ”. They were welcomed and anointed by the bishop as new members of the Church, and then were present at the celebration of the Anaphora for the first time. (That part of the Divine Liturgy was limited to baptized Christians.) They received their first Holy Communion as the sun was rising in the east, and as the Light of Christ was rising in their hearts. An ancient title for Baptism was “Illumination”. We can only begin to imagine how overwhelming this was, how profoundly it was imprinted in their hearts and souls and minds, and of all present as they recalled their own Baptisms.

We still sing “As many as have been baptized…” at Baptisms, as the newly baptized go from the baptismal font to the soleia (before the iconostasis) to receive their first Eucharist. We sing it also at the Divine Liturgy on days on which Baptisms took place in the early Church.

Now, back to the service:

In the stichera early in this Vesperal Liturgy, the devil wails: “… It would have been better for me if I had not received the One Begotten of Mary; for… He destroyed my power and crushed my gates of brass, giving life to the souls which I had possessed, for He is God.” He hadn’t really believed Jesus was the Son of God, the One who is stronger than death. Too late now!

Now it is clear, looking back to yesterday, that ultimately it was not “the world” which killed Christ. It was Satan. And it didn’t work. It was Satan who lost. Now death has been defeated from the inside. As we will sing tonight and again and again through the great Forty Days, “Christ has trampled down death by death and upon those in the tombs bestowing life”.

Tonight our Paschal icon will show the hinges and bolts of the doors of hades and of death flying in all directions, so they can never be put back together, and we can see Jesus Christ leading the dead of all times, the “formerly dead”, up out of the darkness into the Light. Do we Orthodox really believe that  hell is literally “down below”? that it had gates with hinges? Of course not. No more than we think Heaven is up there in the clouds somewhere.

by permission of Saint Isaac’s Skete at skete.com

We live today in a literalist world. Anciently people understood symbolic imagery. As best we can get it into words: Heaven is a series of “higher dimensions” leading up into the Light. Paul spoke of “the third heaven”, presumably out of seven. “Above” and “beyond” that is Eternity, beyond all dimensions, the dwelling place of God.

Hell likewise is a series of “lower dimensions” leading ever further down into the darkness and finally utter nothingness, where, as one translation dreadfully puts it, “the land where all things are forgotten” Psalm 88:12 – or in another translation “the land of oblivion” where we just faded away into nonexistence. Here is what Satan had in mind for us:

But death is not of God. Our God is the God of life. So after we had sinned God allowed us to die, lest otherwise we go on forever in sin, the way we are now.  But then Christ came and entered into death, and destroyed death by His death, and now after we die He leads our souls up to the place where we can be “cleaned up”, so that at the final resurrection our soul and body will be reunited. And that’s salvation in a nutshell.

Back to today’s Divine Liturgy:

Another theme: One of the hymns this morning says that today “is the Blessed Sabbath” which Moses foresaw, the seventh day of the week when Christ our God rested in the tomb from His labors, as once He rested on the seventh day after He created the world. And now will come an Eighth Day! the First Day of a new and eternal Creation, the renewal, completion and fulfillment of the first creation.

In this Holy Saturday morning Liturgy, there are fifteen, count them fifteen, readings from the Old Testament. (Don’t tell anybody, but some churches don’t do all of them.) The point is that the entire  Old Testament, in one way or another, prefigures Christ and His salvation.

Will we look at all of them here? No way! If you want to read them all, go to: https://www.orthodox.net.nz/files/SaturdayReadings.pdf

But just to mention three:

1 Genesis chapter one, the creation story – because this is the New Creation.

We hear about 2 the first Passover and 3 the Exodus .I’m sure you know that the word Pascha means “Passover”. Greek Orthodox wish each other “Καλό Πάσχα!”, “Kalo Pascha”, “Happy Passover”! (“Easter” derives from German “ostre”/”east”, who was a pagan goddess. Who knew?!) 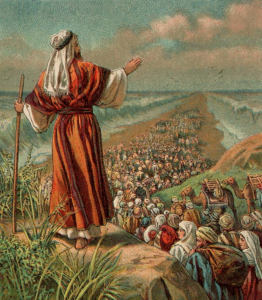 At the Exodus, the Hebrews sacrificed the Paschal lamb, and so the angel of death passed over them. Moses then led the people up out of slavery in Egypt, through the Red Sea, across the desert, where God provided them manna to eat, and on to their promised land. So in this service we sing with the Hebrew children: “God has triumphed gloriously!”

Christ is our new Paschal Lamb, our Paschal Sacrifice, and this our new Exodus. Christ is our new Moses, who leads us up out of slavery to sin and death, through the waters of Baptism, who leads us across the desert of this life and feeds us with the Eucharist, towards our true Promised Land. Christ our God has truly triumphed gloriously.

Now let’s move way ahead: Early in this Liturgy, the clergy are still vested in the violet of Lent, till just before the Gospel they are re-vested in white. Then the priests sprinkle bay leaves (laurel leaves) and flower petals all about the church. Laurel leaves crowned the heads of victors in the ancient games. With laurel leaves and flowers we prepare the way for Christ the Victor.

When I was a new priest, I was chrismated one day and ordained the next (definitely not the ideal way to do it, which I may explain someday). I had never seen this Liturgy, and when I read the instructions I was startled. My mother taught me never ever to throw things around like this indoors, and when I scattered the leaves all over the place I felt very guilty. One of our former Episcopalians looked totally aghast. But it was great fun!

Speaking of which, here is a very enthusiastic Greek priest. I wish I could locate the source, and that the audio would come through better, but I think you get the point!

And then, even though we’re not quite “there” yet, we hear a Resurrection Gospel (Saint Matthew 28:1-20), which covers the entire Forty Days from His Rising to His Ascension.

In Jerusalem this morning, the Patriarch brings the Paschal Fire out from Christ’s Holy Sepulchre into the Anastasis, the ancient Church of the Resurrection. Below: Christ’s Sepulchre, over the cave where He was buried, is in the middle. The Fire is shared through the church, then taken to local churches to be brought out to the people at  midnight.

Now, listen closely: For centuries, the Paschal fire has lighted spontaneously in the Sepulchre. Seriously! This has been reported since back into the Fourth Century. For much on this, see: http://www.holyfire.org/eng/index2.htm  At first I looked at this askance. However, unless you want to think that for all these centuries there has been a continuous, undetected, conspiracy by liars, and nobody has ever “squealed”, ever gave away the secret, not even once… Really? I mean, we’re supposed to believe that Orthodox can keep their mouths shut for 1500 years?! That would be even more of a miracle! (I say that as a devout affectionate Orthodox – but after 32 years here, I know the Orthodox!)

Below: If you’re expecting a reverent Western-world-ish service, be forewarned.

This being the modern world, the Fire is then taken by air to various countries – Greece, Russia, Ukraine (sadly, not likely this year) and other places. Sometimes it even makes it to the United States.

I told you there is a lot going on this morning!

Jesus Christ has already won the greatest victory down below, and it’s no secret what’s coming here on earth. However, not till the Paschal celebration tonight do we sing “Christ is risen from the dead…”, nor do we say “Christ is risen!” “Truly He is risen!”.

Nor does the Lenten Fast end. Not quite yet. Which, in my case, means no cheeseburgers or solid chocolate (don’t ask…) till the end of the Fast. Hang on, folks. If you’ve made it thus far, you can hang on for the last few more hours.