What was it Francis “almost made”? He “almost made it” onto the calendar of the Orthodox Church.

1  Because he missed the deadline! It was not Francis’ fault, of course, that he was born in 1182, but unfortunately the year 1054 is the cut-off, the officially accepted date for the split between East and West. * Before then we and the Roman Catholics share the same saints – they continue to commemorate John Chrysostom; we still commemorate Pope Gregory the Great. But after 1054 both sides honor only saints on their own turf, so to speak.

2  Because the Orthodox Church has no way of knowing for sure that Francis was a saint. Men and women are officially declared to be saints and get their day on the Orthodox calendar, because Orthodox people have already been venerating them for years, already know they’re “saints”. Then in time our heirarchs finally recognize what the people have already decided. Obviously there is no way for our people to determine that in regions not under Orthodox jurisdiction. 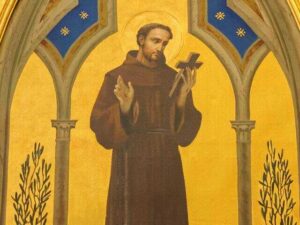 began immediately in Italy, but unfortunately it was in Roman Catholic territory across the Adriatic  – across the line (to reverse Patrick Leigh Fermor’s famous saying) where the Filioque gets stuck into the Creed. So all the Orthodox Church can say about Francis is that we can’t say!

Therefore, sorry, there are no Orthodox icons of Saint Francis. Above: this lovely image with a slight halo is not a genuine icon.

What are Orthodox opinions about Francis?

There are not many online that I can find. Here are two:

1  This is a very harsh negative opinion: “The sad fact is that the attainment of a true spiritual relationship with Christ was never a possibility for Francis, for being outside the Church of Christ, it was impossible that he could have received Divine Grace, or any of the gifts of the Holy Spirit. His gifts were from another spirit.” *

2 Here is a very positive Orthodox opinion about Francis: “…the Lord (through Pope Francis, Ecumenical Patriarch Bartholomew, and so many others) seems to be calling special attention to the teaching of St. Francis today [who] is known in Franciscan tradition… as not only a master teacher when it comes to issues related to racism, violence, inter-religious rivalry, and intolerance, as well as poverty and economic injustice; he is also, as the Catholic patron saint of animals and ecology, a guide for all believers during our worldwide environmental collapse, and the COVID-19 pandemic that is its most recent manifestation.” *

3  My personal opinion, for what it’s worth, is that Francis was one of the holiest men ever to grace the face of our planet, and I’m sorry he “escaped” us. I’m also sorry that his spirituality could not have been more shaped by the classic Eastern Patristic tradition. Nevertheless, I call him Saint Francis, Holy Francis. Let me tell you why.

We haven’t space to cover everything here – just enough to get a “taste” of his life and thought.

Francis was born about 1182 in Assisi, Umbria, in central Italy. His given name was Giovanni di Bernardore, but his father called him Francis, and that name stuck. His father was a successful well-off clothing merchant, and Francis enjoyed it. He led the other young men of the town in good times: fine food, elegant clothing, much partying, singing and dancing. He learned to read and write, but he wasn’t expected to go to college, since he was “set up” to join his father as a merchant.

Francis joined the local armed forces to defend Assisi from an attack by nearby Perugia. (Italy at the time was divided into many small competing “city states”.) When he was twenty he was taken prisoner. A 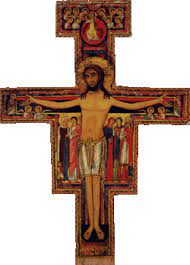 year later, after suffering privation and sickness, he was released, but then underwent a quick series of “religious” experiences. In the most notable of these, as he was praying in a rundown chapel of San Damiano outside Assisi, he heard a voice from the crucifix saying, “Francis, repair my church which is falling into ruins”. He took his to mean he should repair that chapel, so he quickly went into town, sold his horse, sold some of his father’s merchandise, and gave it to the priest of the chapel.

He later understood this to mean that he should rebuild The Church in Italy, which was languishing in many ways. 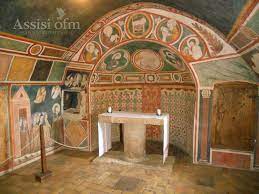 His father took Francis to the bishop to try to bring him back to his senses. Instead, before the bishop, Francis took off all his clothes and threw them on the floor. The bishop quickly gave him a robe to cover him! Francis said that from that time on, he recognized only his Father in Heaven, and he renounced all families ties and family money. Was he just going through “a youthful phase”? No, he was not.

And so Francis married “lady poverty” and lived in simplicity the rest of his life. He did rebuild the Chapel of San Damiano. A group of young men came to help with his project, and then many others gathered ’round him, drawn by… well, what is the magnetic power of men like Francis?  His followers came to be known as Franciscans. In 1209 they went to Rome to ask the Pope’s permission, which he gave. *

Clare, the daughter of another wealthy merchant, came asking to join Francis and live the same simple life at San Damiano. Other young women soon joined her. Francis sent them to a nearby Benedicine monastery for training, then built a place for them at San Damiano’s. Both orders * – the Franciscans and the “Poor Clares” – continue to this day.

Instead of leaving music behind, now Francis wrote songs in praise of God. He loved the natural world, and in 1224, during an illness, he  composed his famous “Canticle of the Sun”. I’ll include it in full here, since it gives the “feel” of his spirituality. (It’s more beautiful in the original Latin.)

Most High, all powerful, good Lord,
Yours are the praises, the glory, the honor, and all blessing.

To You alone, Most High, do they belong,
and no man is worthy to mention Your name. 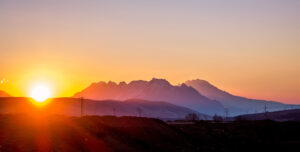 Be praised, my Lord, through all your creatures,
especially through my lord Brother Sun,
who brings the day; and you give light through him.
And he is beautiful and radiant in all his splendor!
Of you, Most High, he bears the likeness.

Praised be You, my Lord, through Sister Moon and the stars,
in heaven you formed them clear and precious and beautiful.

Praised be You, my Lord, through Brother Wind,
and through the air, cloudy and serene,
and every kind of weather through which
You give sustenance to Your creatures.

Praised be You, my Lord, through Sister Water,
which is very useful and humble and precious and chaste.

Praised be You, my Lord, through Brother Fire,
through whom you light the night and he is beautiful
and playful and robust and strong. 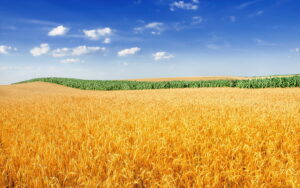 Praised be You, my Lord, through Sister Mother Earth,
who sustains us and governs us, and who produces
varied fruits with coloured flowers and herbs.

Praised be You, my Lord,
through those who give pardon for Your love,
and bear infirmity and tribulation.

Blessed are those who endure in peace
for by You, Most High, they shall be crowned. 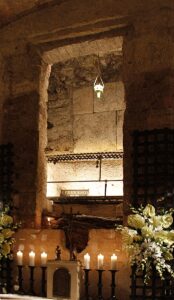 Praised be You, my Lord,
through our Sister Bodily Death,
from whom no living man can escape.

Woe to those who die in mortal sin.
Blessed are those who will
find Your most holy will,
for the second death shall do them no harm.

Praise and bless my Lord, and give Him thanks and serve Him with great humility.

You’ve seen the birdbaths with Francis and the birds. Did he actually preach to the birds? Yes. During a time of turmoil in the Franciscan Order, he turned 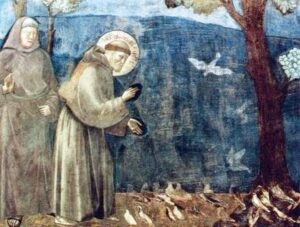 to the birds who gathered round and listened, till he made the sign of the cross and dismissed them. He was like the many saints in the Eastern tradition who made friends of wild animals.

Once, during the time of the Crusades, Francis wanted peace in the world. So… in 1219 he went to Egypt during the siege of Damietta, walked straight through enemy lines, and met with the Sultan Malek al-Kamil to speak about the need for brotherly love!

There is so much more that can’t be told here. As years went on, Francis felt the need for more prayer and often withdrew from the brothers – who now numbered in the thousands! In 1224, while praying on Mount Alvernia, he had a vision, and when it was over he saw that he had the wounds of Christ on his own hands, side and feet – called “the stigmata”. * This gave him great pain. He kept this hidden. Only a few close friends knew about it, till after his death.

Saint Francis died on October 3, 1226 at San Damiano. (For some reason his feast day is October 4.) Popular devotion to him was so great that he was declared a Saint only two years later.

Before we end, you need to hear some of the sayings of Saint Francis: 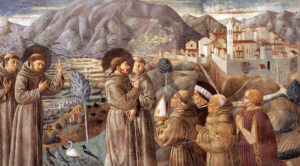 Francis did not only speak these words. He lived them. So do I think Francis of Assisi was a greatly holy man – Saint Francis? Yes. 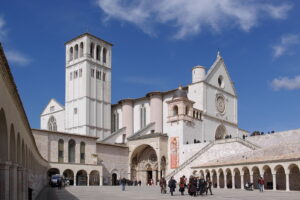 Finally, a piece of bad news: The everywhere-popular Prayer of Saint Francis of Assisi, “Lord, make me an instrument of thy peace…”  Did Francis write it? No. It does contain some of his sayings, but in its present form it can be traced back only to France in 1912! However, as a Franciscan friar wrote, “One can safely say that although he is not the author, it resembles him and would not have displeased him.” It’s a beautiful prayer, well worth praying. So pray it. You can find it in many places.

Next Week: Usury, the forgotten sin

Week after Next:  2020 Orthodox Statistics – many surprises, for better and for worse