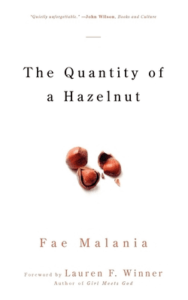 I wonder if any of you read the old book The Quantity of a Hazelnut by Fae Malania. It was published in 1968, surely before many of you were born.

A very small volume, it consisted of short meditations written by an “Anglo-Catholic” Episcopalian woman, wife of an Episcopalian priest. I bought and read it when it came out, and several times thereafter, and then forgot about it. Not long ago I re-discovered it on one of my bookshelves. My wife said “Why, it has always been sitting right there! How could you not see it?” (Explanation: I’m male.) Now I’m reading it again, and I’m glad.

Her meditations, often based on ordinary things from her daily experience, were written from a traditional Western Catholic perspective. They are no less profound and poignant for that.

I hope I am not out of line to include two of her meditations here. None of the houses that have published The Quantity of a Hazlenut over the years now list the book. Fae Melania herself held the copyright, but she died in 2007. So who do I now go to for permission?

I would like the angels to pass along this message to her: “Fae Melania, I cannot begin to tell you how much your little book has inspired me, and touched my heart, mind and soul. Thank you.” I wish I had written while she was still alive.

If you’re interested, used copies of the book are still available from Amazon, as well as a Kindle edition.

The Quantity of a Hazelnut

We will talk about the Blessed Theotokos in due time.

I think first I should explain this odd title. It comes from the writing of an obscure 15th century English mystic, Julian of Norwich. I suspect even many Western Christians have not heard of her. She has never been added to the list of Western saints, though she is venerated by some, and her statue stands here in Norwich Cathedral. 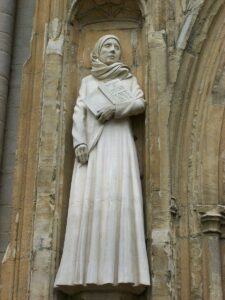 “Dame Julian” lived almost her whole life as an “anchoress” – that is, in seclusion – in Saint Julian’s Church in Norwich, England. Her actual name is not known. She had a series of visions, or “showings” as she called them, which she wrote down in a book, Revelations of Divine Love. Protestants suppressed its publication for over three centuries. Why ever? What was despicable about this deep piety and great beauty? She was Catholic. (“Nuff said”.)

“For we are so preciously loved by God that we cannot even comprehend it. No created being can ever know how much and how sweetly and tenderly God loves them. It is only with the help of His grace that we are able to persevere in spiritual contemplation with endless wonder at His high, surpassing, immeasurable love which our Lord in His goodness has for us.”

Here is the “saying” which gave title to Fae Melania’s book:

“And … he showed me a little thing, the quantity of a hazel nut, lying in the palm of my hand, as it seemed. And it was as round as any ball. I looked upon it with the eye of my understanding, and thought, ‘What may this be?’ And it was answered generally thus, ‘It is all that is made.’ I marveled how it might last, for I thought it might suddenly have fallen to nothing for littleness. And I was answered in my understanding: It lasts and ever shall, for God loves it. And so have all things their beginning by the love of God.”

Now, here are two meditations from Fae Melania’s book. Neither is about the Dormition of the Theotokos, but they are about the Blessed Virgin.

Should you want to read about the Dormition itself, you might go to my Post of three years ago: “Father Bill’s Orthodox Blog 78. The Falling Asleep of the Theotokos”.

Here is a short article which tells more about the origin and specifics of the Feast: http://ww1.antiochian.org/feast-dormition-theotokos

First Meditation from The Quantity of a Hazelnut

My Introduction: We Orthodox often think about how the Theotokos presented Christ to the world. I had never before imagined how He must have presented the world to her and to Joseph.

There is a story that Jesus, when He was a child, played at making birds out of clay, and when He tossed them into the air, they flew. Well, I don’t believe that. There is another version of His childhood that I believe even less: that sob story about the despised carpenter’s family, outcast, poor, hungry, cold and sad. Nobody despises carpenters nowadays, and I’m sure they didn’t then, either, not in that little peasant backwater. There may have been a famine, of course; there so often was; but if everyone else was eating, I think the Holy Family was, too.

I have a different idea of what it must have been like in that Holy Household. He didn’t make birds, but He first, since Adam, named them.

Imagine what it was like watching Him grow, seeing His infant eyes first discover a bird and, in delighted recognition, know its nature. What a blazing light of reality must have grown in that House as His world widened, as He saw and touched and handled the common things of the visible world. How the fire must have leapt, how the wood of the table must have shone in the sunlight, how water must have sparkled in the pail, how stone and earth must have described geology. And the flowers beside the door, the wild flowers beyond, the fig tree, the olive, the vine, with what a light they must have burned when the light of His eyes touched them. How the birds must have sung and the cat purred, and lambs played. Goats, too, rabbits, butterflies, caterpillars, field mice, little lizards, garden snakes, the ox and the 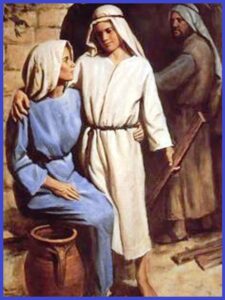 ass, the hen with her chicks, all struck with the lightning of His glance, their natures known and revealed

How the hearts of Mary and Joseph must have sung, to see the unchanged world in its charged beauty, seeing as He saw.

Those were the hidden years, one with the earth’s sweet being in the beginning, Eden in Nazareth. Then He was daily God’s delight, rejoicing always before Him.

Please forgive the image above. I know it isn’t good art, but it’s the best I could find –  from the site “Walking with Yeshua”. Are there no classical images of Jesus as a boy at home with His parents? Western art often shows him with the Virgin and Joseph as an extremely outsized fat naked baby. (I don’t even want to show an example  here, I find it so bizarre.) Why ever? And why have iconographers made nothing of this blessed period in the Lord’s life? Granted. the Gospels provide few details – only that “the child grew and became strong; He was filled with wisdom, and the grace of God was on Him.” Luke 2:40 “And Jesus grew in wisdom and stature, and in favor with God and man.” Luke 2:52  But why wasn’t this enough to inspire some iconography?

Ms. Melania wrote this in the classic Western Catholic tradition, illustrating much of what has now sadly been abandoned in the West. “The Church of Saint Mary the Virgin” was her parish church. It was, and still is, a traditional Anglo-Catholic church, just off Times Square in New York City.

In the Church of St. Mary the Virgin there is a large and, I used to think, rather ordinary statue of the Virgin. I don’t think so any more.

She is simply dressed, in blue I think, with the usual veil. There is a touch of gold in her robe, but I doubt if she has noticed it. Her feet are bare, they stand firm and solid on the ground. Her body is very straight, not rigid but held erect, controlled and unstrained, Her hands are lifted in the position of prayer, but if you look closely you will see that her elbows do not rest against her sides, Though her fingers touch, they are not joined. Her hands do not support each other. In spite of the soft, loose folds of her gown nothing about her is settled or soft or limp. She is all strong bone and disciplined muscle.

This is the statue of which she writes. By Sister Mary at “Creative Commons” 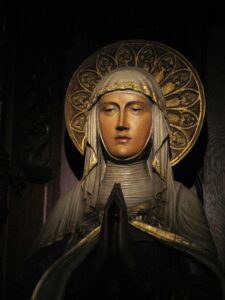 Her face is quiet, rather withdrawn almost a little stern. The marks of her suffering are plain, but she is not now suffering, or even thinking about it. She is neither the joyous young mother of the Nativity, nor the Mater Dolorosa of the Passion, nor the radiant and serene Queen of Heaven. She is the living, earthly woman who has walked the Way of the Cross with the words still sounding in her ears, Blessed art thou among women and blessed is the fruit of thy womb. She is the mother who has seen the glory of the Resurrected Christ, while her arms still ache with the weight of His lifeless body. The whole of her single, sinless soul is concentrated in a single act of containing these impossible opposites, pondering in her heart these fathomless mysteries. Not by the smallest motion of the self does she interrupt the work of God within her.

And yet when you look into her face she does not look away, hoarding to herself a private vision. Her eyes meet ours in pure communication, giving without measure her precious burden of love and fear, of knowledge and of holy hope.

Truly she is Mary, Mother of contemplation.