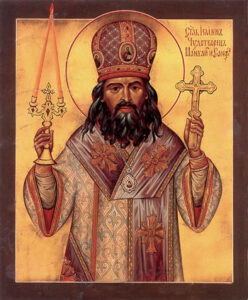 I know: His official title is Saint John of Shanghai and San Francisco. This is because Orthodox hierarchs who are recognized as saints seem to be typically labeled according to the first place where they served as bishop. However, I think John Maximovitch – this remarkable man – really deserves the extended title I gave him above.

His feast day on the “new” Gregorian calendar is today July 2, and June 18 on the “old” Julian calendar which John, being Russian, lived by. (Any here present who are not Orthodox and are confused by our calendars … … oh, never mind. Let’s talk about it some other time.)

In our limited space here, we can barely touch on what ought to be said about this wonderful man, for the word “wonder-full” is to be taken very literally in his case. At the end of this Post, I’ll refer to you a number of sources which provide more information about Saint John Maximovitch

We’ll look first at his story, then at his character.

A brief account of the Life of Saint John Maximovitch

John was born in 1896 in the Kharkov region of Russia (now Ukraine, if I understand it right) and at Baptism was given the name “Mikhael / Michael”.   He 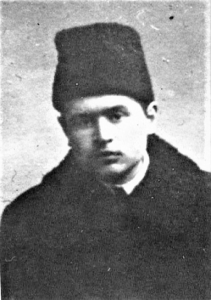 was a deeply religious boy, but sickly and ate little. He graduated from Kharkov University in 1918 with a degree in Law – an inauspicious time, as you likely know: the atheistic Soviet Communists were taking over Russia.

As a young man, courtesy of Orthodox Canada

In 1921 the civil war came to Kharkov, and Michael fled with his family to Serbia, where he graduated from the university in Belgrade in 1925 with a degree in theology. In short order he was tonsured as a reader, then was made a monk, given the name John, and began to teach.

In 1934, despite his protest, John was made a bishop, and assigned (to his amazement) to the Diocese of Shanghai in China. There he found Orthodox of many backgrounds – Serbs, Greeks, Ukrainians – deeply divided, and not chiefly for “ethnic” reasons.

Besides ordinary human cantankerousness, the great probem was that after the Bolshevik revolution, Orthodox were jurisdictionally divided. Patriarch Tikhon of Moscow had left instructions that if his successors were true Orthodox, people should follow them; but if they were Communist dupes people should form their own temporary Russian jurisdiction in Exile. Simple! But what if people did not agree whether a patriarch was genuine or not – which also applied to those who served under him. The result, in the United States yet today, is three jurisdictions, all of Russian origin. Happily, with the fall of Soviet Communism, they are all now “in communion” with each other – but there were decades of suspicion before that happened. 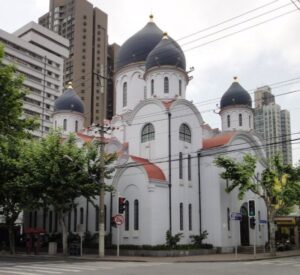 Back to the immediate subject:

Bishop John quickly settled the disputes in Shanghai and united the congregation. Among many other good works, he built an orphanage which finally housed up to 500 children.

Then came the Japanese occupation, with its oppression and suffering.

By 1949 the Communists conquered China. The Orthodox colony of Shanghai fled, most at first to the Philippines. Bishop John was with them.

He was then assigned to the Russian community in Paris. There he had the same positive effect. Since he had always had a great love for and knowledge of the saints, now he collected the lives of early Western saints and commemorated them. As he felt necessary, he celebrated the Divine Liturgy in Dutch and French, as in Shanghai he had served in Greek and Chinese, and as later in the United States he did so in English. He also authorized a “Western Rite”, in hopes of making Orthodoxy more accessible to Western Christians. (At the time this was especially relevant, since traditional Western Rite still existed in Roman Catholicism, and among some Anglicans.) As he said, “Never, never, never let anyone tell you that, in order to be Orthodox, you must be Eastern. The West was fully Orthodox for a thousand years, and her venerable liturgy is far older than any of her heresies.”

Then in 1962 Bishop John Maximovitch was sent to the

Russian community in San Francisco with its vast diocese, where he continued his work. He completed the building of Holy Virgin  Russian cathedral there, where his relics now lie. Here again he united a divided congregation to a great extent, though in his latter years he was sometimes attacked and slandered. He never responded in kind.

The Character and Special Gifts of Saint John Maximovitch

At the university in Belgrade his students were quick to notice his love: for example, he would quietly go through the dormitory at night to cover up students whose blankets had fallen off. And his extraordinary asceticsm: he slept only an hour or two at night, and then not in bed but sitting in a chair. He seemed continually in prayer. He celebrated Divine Liturgy or at least received Holy Communion daily. These things continued throughout his life.

Sometimes his icons look very severe (they put me off, till I got to know him) – and he could be tough when necessary. 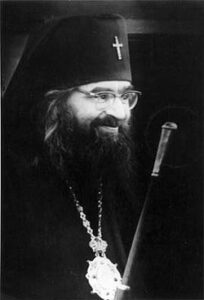 This picture, however, shows how most people knew him and loved him and remembered him.

Bishop John had a special love for children. During Divine Liturgy, when he was not in the Altar, he often played briefly with small children, making them happy and feel at home – thereby offending some of the more “pious”. He would smile and joke with his altar boys.

On the appointed feast days, he sprinkled lots of holy water on people, with a happy glint in his eye. *

During the Japanese occupation of China, activity was strictly limited – except for Bishop John, who went about his pastoral work as if nothing unusual was happening. There’s the story of the night when the orphanage ran out of food, and they were desperate. All night long they could hear Bishop John in his room, praying and prostrating. Early the next morning trucks arrived with food.

He had the gift of healing. People who were not expected to recover sometimes did so after he visited them and prayed over them. Sometimes he appeared for that purpose unexpectedly when somehow he knew that people were seriously ill. Sometimes even after his prayers from a distance, people for whom the doctors had given up hope would recover.

He was clairvoyant – and apparently more. The most startling story (the source of which I can’t locate at the moment) is of the woman in critical condition in the hospital who was longing for a visit from Bishop John – but it was late at night, and the hospital doors were locked to visitors. Suddenly Bishop John walked in. At first she thought she was dreaming. He prayed with her for some time, then left, leaving a small gift so she would know he was “real”. She recovered.

Bishop John foreknew the time and place of his death: “at the end of June” in Seattle. Some years earlier, though he was in good health, he began to warn people that for certain future events he would no longer be with them. And so it was. On a parish visitation in that city, he celebrated the Divine Liturgy, then spent three hours in the altar praying. Afterwards he went to his room in the church building next door. People heard him fall, then hurriedly placed him in a chair where he died peacefully, on July 2, 1966.

Soon after he died, a man who had been at odds with Bishop John saw him in a dream, in light with brilliant rays about his head. A woman who had been devoted to him had this dream: People were carrying Bishop John in a coffin into the church, when suddenly he arose, stood in the royal doors, anointed people and said to her “Tell people: though I have died, I am alive!”

He has indeed still been very much alive. Before his canonization (“glorification”), Bishop John’s body was placed in a chapel in the basement of the San Francisco cathedral. After 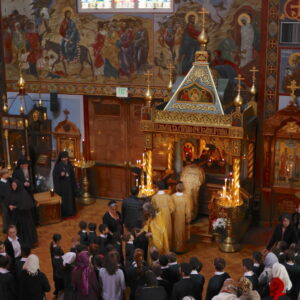 his canonization by the Russian Church in July 1994, the body of Saint John – unembalmed but still incorrupt, as it remains today – was moved into the cathedral itself, where there is usually a continual stream of pilgrims.

Since then there have been numerous inexplicable miracles, both at the cathedral and at a distance, both for Christians and others. Some of his relics now lie in churches in Serbia, Russia, Greece, Mount Athos, South Korea, Bulgaria, Romania, England, Canada, as well as in the United States. Parishes and monasteries all over the world are dedicated to him.

What else is there to be said about this “wonder-full” man? Saint John Maximovitch, pray to Christ our God for the Holy Orthodox Church, for the world, and for us all.

This video shows you the interior of the Cathedral where lie the incorrupt relics of Saint John. I’ve included it especially to show the unity of Holy Orthodoxy, despite our jurisdictional divisions. Here is a choir at Holy Virgin Russian Orthodox Cathedral in California, singing a Greek hymn to the Theotokos, as people honor an Orthodox saint from “all over the world”.

Other Sources of information about Saint John Maximovitch

I don’t know how these videos will appear on your screen, but on mine one of them was preceded (God help us) by a commercial for a game where children shoot stuff – and another by a commercial about how to lose weight, for which I think John Maximovitch would have a simple solution: Eat less!

Some books about Saint John Maximovitch available from Amazon: https://www.amazon.com/Books-St-John-Maximovitch/s?rh=n%3A283155%2Cp_27%3ASt.+John+Maximovitch

Just to demonstrate further that devotion to Saint John Maximovitch is universal in the Holy Orthodox Church:

From the Orthodox Church of America: https://www.oca.org/saints/lives/2020/07/02/206392-saint-john-maximovitch-archbishop-of-shanghai-and-san-francisco

Next Week and the following: Even though I’m too old to travel that far anymore – Let’s go to Greece in 2014 and visit some Orthodox church, which were full as usual.