This is a beautiful service, the service I love above all others – and that’s saying a lot. If for some reason you can’t get to church, please watch it livestream, either live or on video.

We stand before the bier on which Christ is laid out before us. On the Epitaphion see His Body lying stone cold dead, with His grieving Mother and Joseph of Arimathaea and Nicodemus and the Holy Women and often even holy angels mourning. We join in singing Lamentations over Him. This follows the ancient Mediterranean custom of women singing laments at peoples’ deaths.

Please take time to listen to this. It is beautiful and powerful. (I’m starting to cry, listening to it, as I prepare this Post.) The Third Stasis is a hymn greatly loved by Orthodox people. (It’s about 16.05 minutes below.)

Here is another version of the Third Stasis, with the toll bell ringing. (I found this some years ago and don’t know its origin, though it’s Greek. If you do, please let me know.)

But listen carefully and notice: Throughout these long Lamentations over Christ, the words of lament are put not in our mouths, but in the mouth of His Mother. The Orthodox Church does not focus much on Christ’s suffering, great as it was. For deep down even at His lowest moment when it felt to Him like His Father had forsaken Him, He knew what He was doing and what would be the outcome.

Rather in these hymns we focus on the lamentations of his Blessed Mother, for she did not know.

Have you ever considered what she went through? She suffered as no other mortal on earth has ever suffered. Not only was her only Son dead, but also she alone knew who her Son was – the Son of God come to save the world. And He is dead! They have destroyed Him. And so there is no hope for the world, no hope for mankind, no hope for anyone ever. Life may continue, but the Norse myths were right. Now in the end it will all come to nothing, only darkness and destruction in this world and the next – for God has failed! It was the ultimate horror. She alone, and all alone, knew what her Son’s death meant. There was no one who could help her, no one who could comfort her. But even in the Lamentations, there are words of hope of the coming Resurrection. And soon, very soon, she would not sorrow or lament: “The angel cried to the Woman full of grace: Rejoice, rejoice…your Son is risen from His three days in the tomb!” (Oh, I can hardly wait to hear that hymn!)

That is why we do not join her in her Lamentations. For we who live on this side of Christ’s Resurrection know: In the End if we have lived and died with Jesus, there will be nothing for us to lament, for her Son has risen victorious.

Late in the service, something else happens which overwhelms me year after year. We all process out of the church following 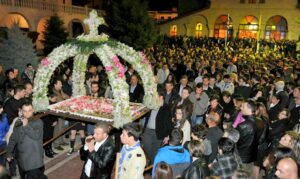 Christ’s Body laid out on the Epitaphion – as people usually still do at funerals. We become part of Christ’s funeral procession and, following His precious Body, we go out into the darkness, into death.

Greece, where Orthodoxy is strong! – courtesy of “Greek News Agenda”

Some Orthodox walk three times around the church. Then coming back into the church we all pass under the Epitaphion – one by one, yet all together – in symbol passing through death with Christ, each of us dying with Him. And when we come out from under the Epitaphion, where do we find ourselves? In church, still in The Church! We are still alive. We are still with Him. We are still with each other. In this life we live with Christ in His Church. We die with Christ in His Church. And after we have “passed on” we are still in the Church. Through it all, essentially nothing has changed, for Jesus Christ has conquered death and hell. He has broken down the boundaries between Heaven and earth. His Church is a supernatural community which encompasses Heaven and earth. All things in all worlds are One in Him.

Brothers and sisters, if you are with Jesus Christ, do not fear death. We pray for the “departed”, don’t we? our way of saying that when people die they have only gone on a journey. For “in my Father’s house there are many rooms…” and we pass from this room to the next. “I go to prepare a place for you, so that where I am, you may be also.” And that’s all there is to it.

At the very end, the Lamentations service is turning into a celebration. Though His Resurrection on earth doesn’t come till tomorrow night, we now begin to celebrate Christ’s victory over hell and death. Tomorrow morning we will celebrate the first Divine Liturgy of the Resurrection – actually of Christ’s triumph “down below”. Christ has now descended into hell, hades, the “underworld”, sheol, that “lower dimension”, the dark place of the dead. One translation calls it “the land where all things are forgotten”, where the dead from all times were held captive by Satan and where he intended that they finally fade into nothingness.

But no more. Now Christ is driving Satan crazy, rescuing the dead of all times – past, present, future – leading them up into the light, into life again. We will see that in our Paschal icon tomorrow night, and then for the next Forty Days.

At the end of tonight’s service, in the Old Testament reading (Ezekiel 37:1-14)the question is “Can these bones live?” Ezekiel was asked that about the “bones” of Israel, their nation laid level by the Babylonians. But our question is about real bones, first Christ’s bones. Can He rise again? And our bones. Can we be raised again from death? The answer in all three cases is Yes! Yes! Yes! 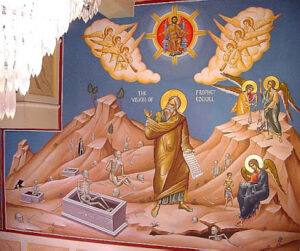 Yes. We believe not only in a bodiless spiritual afterlife, but “I look for the resurrection of the dead, and the life of the world to come.” Christ said, Christ promised that at the Last Day all who lie in the graves will rise. John wrote, “We will be like Him”, like Jesus Christ risen from the dead. Even more: At the End, all good things will be raised again and restored: “A new Heaven and a new Earth.”

So already in tonight’s Epistle (1 Corinthians 5:6-8) we begin the celebration. We can’t wait… “Christ, our Passover has been sacrificed for us. Therefore, let us keep the Feast.”

But then we return to the Tomb (Matthew 27:62-66) with a great stone still sealing the door, and we wait just a little while longer. And then we sing this hymn (normally a Sunday Troparion) about what is about to come: