To explain for our non-Orthodox visitors: In the Orthodox tradition the full Divine Liturgy is always a festival service, so it is not celebrated on fasting, penitential days, including all the ordinary weekdays of Great Lent. (Roman Catholics have more Masses during Lent. We have fewer Liturgies.) That is why on Lenten weekdays we serve the Divine Liturgy of the Presanctified Gifts, omitting the consecration of the Holy Gifts, the Bread and Wine.

But Great and Holy Thursday is a feast day. We celebrate the evening when Christ instituted the Holy Eucharist.

Now our worship services and readings get even longer – as you see above. Henceforth, unless we want the text of these Posts to go on forever, it won’t be possible to discuss everything in the readings. I hope you’ll read them all for yourself. You can find them online easily at 1 https://www.goarch.org/chapel/  2  https://www.antiochian.org/liturgicday

Here quickly is the narrative. We hear the third account of the sinful woman anointing Jesus, this time in the house of Simon the Leper, and then how the disciples prepared for the Passover meal, and the meal itself and the institution of the Eucharist.

Let’s stop and talk about the  Divine Liturgy again. 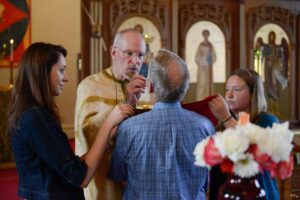 The following is from the book The Shape of the Liturgy by Father Gregory Dix, a mid-20th century Benedictine monk of the Church of England. It reflects a Western viewpoint. We Orthodox don’t know much about Joan of Arc, nor do we “offer Masses” for particular persons and their needs. But we certainly have our share of saints (to put it mildly) and we offer prayers for people and their needs at every Divine Liturgy. So in that context his words describe us as well. I have always found this passage very moving.

“Was ever a command so obeyed? For century after century, spreading slowly to every continent and country and among every race on earth, this action has been done, in every conceivable circumstance, for every conceivable human need from infancy and before it to extreme old age and after it, from the pinnacles of human greatness to the refuge of fugitives in the caves and dens of the earth. Men have found no better thing than this to do for kings at their crowning and for criminals going to the scaffold; for armies in triumph or for a bride and bridegroom in a little country church; for the proclamation of a dogma or for a good crop of wheat; for the wisdom of the Parliament of a mighty nation or for a sick old woman afraid to die; for a schoolboy sitting an examination or for Columbus setting out to discover America; for the famine of whole provinces or for the soul of a dead lover; in thankfulness because my father did not die of pneumonia; for a village headman much tempted to return to fetich because the yams had failed; because the Turk was at the gates of Vienna; for the repentance of Margaret; for the settlement of a strike; for a son for a barren woman; for Captain so-and-so, wounded and prisoner-of-war; while the lions roared in the nearby amphitheatre; on the beach at Dunkirk; while the hiss of scythes in the thick June grass came faintly through the windows of the church; tremulously, by an old monk on the fiftieth anniversary of his vows; furtively, by an exiled bishop who had hewn timber all day in a prison camp near Murmansk; gorgeously, for the canonisation of S. Joan of Arc — one could fill many pages with the reasons why men have done this, and not tell a hundredth part of them. And best of all, week by week and month by month, on a hundred thousand successive Sundays, faithfully, unfailingly, across all the parishes of christendom, the pastors have done this just to [create] the holy people of God.”

We spoke last night about the Holy Eucharist itself. So now only one comment about today’s Epistle. Saint Paul warns his readers not to receive the Eucharist “in an unworthy manner, lest he eat and drink judgment upon himself”. Please do not misunderstand this.

Does he mean we must be morally perfect before we receive Holy Communion. Of course not. In that case, the only people who should receive would be our Lord Jesus Christ and His blessed Mother! The whole point of receiving the the Lord’s Body and Blood is for Him to give strength to us who are imperfect.

Pay attention to Paul’s next words: To receive “unworthily” means “not discerning the Lord’s Body”.

Worthy reception means: 1 To “discern”, believe in the Presence of our Lord Jesus Christ in this Holy Mystery of His Presence. 2 Also to “discern” the Church and the people who are the Church as “the Body of Christ”, and therefore to be participating in the life of the Church.

Receiving the Holy Eucharist therefore requires preparation. This is not McDonalds’. We should not feel free to just run in occasionally and catch a quick snack of Holy Communion. Proper preparation means we must 1 Repent, asking for the Lord’s forgiveness, being at peace with those around us, 2 Forgive those with whom we are at odds * 3  Intend to try to live a better life, 4  Prepare ourselves by prayer and fasting, 5 Attend the full Liturgy, or at least (as some say) in time to hear the Holy Gospel.

As long as this is how we approach the Holy Gifts, we will not be receiving “unworthily”.

The remainder of the Gospel covers:

How Jesus washed the feet of His disciples, even Judas’ – the sign of His abject servanthood: “As I have done to you, you must also do to one another”.

His last temptation in Gethsemane. I think this was in one way His true crucifixion, the crucifixion of His will. “Father, take this cup from me. Yet not my will be done, but Thine be done.” 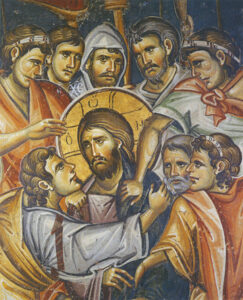 Judas betrays Him to the authorities, with a kiss. This was and is the usual Middle Eastern kiss of brotherly greeting. But Judas, how could you? How could you do that to your Lord…?

with permission of Saint Isaac’s Skete at skete.com

His trial before the Sanhedrin. When He was asked “Are you the Messiah”, He answered “You have said it”. This was His way of saying “Yes”, just as in modern English usage: “You said it”. At last He said clearly that He is the Messiah. On those grounds they convicted Him.

The Sanhedrin did not want His blood to be on their “innocent” hands. Also only the Roman authorities had power to execute, so “When morning came, all the chief priests and the elders of the people took counsel against Jesus to put Him to death; and they bound Him and led Him away and delivered Him to Pilate the governor.”

So much horror, coming so quickly. Try to imagine what this was like for Him. The final darkness of Holy Week, “that which was written of Me” was upon Him. He had known all along that this would come, but now it was here.