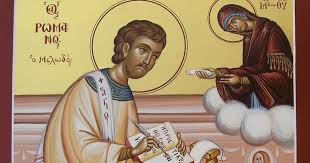 Orthodox Advent doesn’t amount to much liturgically till the last few days, but when we hear this lovely Kontakion early in December, I don’t know about you, but I always feel a little Christmasy thrill. For which we should all say a thank you to Saint Romanos the Melodist who wrote it.

This is from a site with much lovely music – on YouTube titled simply “Orthodox Christian Chants”. This hymn is in Greek, though many are in English.

He composed a multitude of other Kontakia *, some say as many as a thousand of them.

Only eighty or ninety of them are extant today, and only a few of his works have been translated into English. But this one has:  Arise, O God, and judge the earth, for You shall inherit all the nations.” which is sung at Holy Saturday Liturgy, just before the first Gospel of the Resurrection.

For those unfamiliar with or not comfortable with ancient Byzantine music: Keep in mind that musical styles were very different then. Also what sounds mournful and sad to the modern ear did not do so then. In addition, people then had much more time to spend in church – no cable TV to distract them from more important things.

What caused Saint Romanos’ effusion of liturgical hymnody? Here’s his story, as passed down to us. Specifics about his early life are a bit vague, as you shall now see.

Romanos lived in the Fifth Century – though a few place him later. He was born either in Emessa (now Homs) in western Syria or in Beirut. We know he later lived in Beirut. He must have been Jewish, or had a Jewish heritage of some sort, because those who know say his compositions contain many “Hebraicisms” – Jewish turns of phrases. Did his parents convert to Christianity and so baptize him as a child? Or did Romanos later choose to be baptized? We don’t know. We know that at the church in Beirut he became a reader (cantor), and some say he was ordained Deacon there. It is certain that he was later a Deacon in Constantinople. *

Now the story comes clearer: Romanos’ singing voice was awful, raspy, grating. (If you’ve ever had to listen to such singing, you know irritating this is. I’ve wondered how, with such a voice, he ever became a Deacon. I wonder if he had once had a good voice but had lost it somehow.) In any event some other singers made fun of him. They were especially nasty after he had rasped his way through the evening Vigil before the feast of Christ’s Nativity. (At Christmas, of all times! Someone from higher up should have sat on them for that.) Perhaps you know how humiliating it is to be ridiculed like that.

Now, Romanos was a pious man, a man of prayer. So that night, hurting badly, instead of going home he went for consolation to his favorite church, the Church of the Panaghia * in the Blachernae district, where they possessed the Cloak of the Holy Theotokos. There he fell asleep. In a dream? vision? the Mother of God came to him and gave him a small scroll and commanded him to eat it. He did so and immediately he was awake.

Romanos must have tested his voice. For next morning he went immediately to the Patriarch for a blessing, climbed into the Ambo (pulpit) and began his singing. To everyone’s amazement, his voice was beautiful. And what he sang extemporaneously was his lovely new Kontakion of Christmas.

The rest is history, as they say. Among the better known of Romanos’ other Kontakia (most now sung chiefly in the monasteries) are those for The Preparation for Christmas, The Martyrdom of Saint Stephen, The Death of a Monk, The Last Judgment, The Prodigal Son, The Raising of Lazarus (for Lazarus Saturday), Adam’s Lament (for Palm Sunday), The Treachery of Judas, and much more. Many scholars say he also composed the well-known Lenten Akathist Hymn to the Theotokos, and if so I think we know why. (Thanks to Orthodox Wiki for this list.)

Below is a small portion of the Akathist Hymn.

The whole of Romanos’ Kontakion for the Nativity was sung for many centuries at the imperial Christmas banquet in Constantinople by the joint choirs of Agia Sophia and the Church the Apostles. The Kontakion consists chiefly of a long dialog between the Virgin Mary and the Magi. * It is still considered his best work.

“Perhaps the greatest of all hymnologists is Saint Romanos the Melodist. Many other hymnologists have written ecclesiastical hymns, but none of them inspired the Christians as much as St. Romanos.” National Forum of Greek Orthodox Musicians

And that is the story of Saint Romanos the Melodist. He died in peace about the year 55 and is buried in the Church of the Theotokos in Constantinople, now Istanbul.

Glory to the Father and to the Son and to the Holy Spirit Thou hast proved to be the very first fruit of blessings and a source of salvation, O our Father Romanos; for in composing angelic hymnody, thou hast demonstrated the godliness of thy way of life. Entreat Christ God that those who sing thy praise be delivered from temptations and perils.

The Society of Saint Romanos the Melodist https://www.societyromanos.org  is a pan-Orthodox group which, in his memory, promotes Orthodox culture and music in America.

Saint Paul described the Holy Apostles this way: We are “fools for Christ’s sake.” I Corinthians 4:10  He was talking about their life, which to the outside world looked completely ridiculous, pointless. Why ever would anyone give up homeland, synagogue, comfort for the sake of… what? some dead Jewish criminal? What fools!

Over the years, Paul’s words inspired a category of holy men and women who feign insanity. They reveal their actual sanity and holiness to only a few, perhaps only their spiritual father or mother. However, often other people slowly begin to catch on because of their hidden good deeds. So far as I know, Holy Fools are found only in Eastern Orthodoxy – and chiefly in Russia (for whatever reason) in the last five or six centuries.

Holy Fools were sometimes given the gift of healing or of foresight into future events.

Fools for Christ were sometimes allowed to “speak truth to power”. For example in the Sixteenth Century, Saint Basil the Fool of Moscow, who even in the Russian winter ran around the streets of the city naked. (These days that alone with get him put away.) But Tsar Ivan the Terrible allowed Basil to criticize him. (Others who did so were quickly executed.) One year Basil gave Tsar Ivan a slab of meat during Great Lent and told him it didn’t matter whether he gave up meat or not, because of all the murders he had committed, peoples’ flesh he had “consumed”.  And he lived! Could we perhaps use some Holy Fools to speak truth to power today?

Why ever, some might ask, would people take on this bizarre life-style? Simple: Because God calls them to do it. (What else can we say about any major choice people make for their lives – marriage, vocation to priesthood or monasticism –  after they pray and think and seek God’s will? It becomes something people feel like they just must do, though often they don’t understand why at first. But if you just stick to it, God makes it come clear. gives what it says is a partial listing of Fools for Christ – at least forty of them. And also at the bottom under the heading “Orthodox Psychotherapy” a number of articles on the subject, so we won’t confuse Orthodox Holy Fools with people who are truly mentally ill and need psychiatric help.

The Story of Saint Andrew the Fool

Andrew seems to be the earliest known Fool for Christ.

He was a man of Slavic origin, born in Scythia in the Tenth Century. A devout man, given to prayer and the Scriptures, he became enslaved to a notable dignitary of Constantinople. There he became spiritual child of one Nicephoros, a priest at Hagia Sophia. In time he began to act as if he were insane. These days we would have taken him to a psychiatrist. But they took him to the Church of Anastasia, known for healing mental illnesses. Andrew, knowing within himself that he was feigning insanity, prayed to Saint Anastasia who appeared to him and gave him her blessing to continue in his vocation as Holy Fool for Christ. Saint Andrew’s master threw him out. He lived for many years on the street, dressed in rags. He begged food from passers-by, mistreated there by many, and then quietly gave the food to the poor – who also mistreated him, thinking anyone who would do that must be really insane. Andrew accepted all this humbly.

One story says he was once lifted, like Saint Paul, into the Third Heaven, where he saw the Lord Christ and His saints.

At some point Andrew took to himself a disciple Epiphanios.

Here is why Saint Andrew is most remembered: One night he and his disciple were at Blachernae Church where which possessed the Cloak of the Holy Theotokos – mentioned above in the story of Saint Romanos. This was a time when Constantinople was threatened by a Russian invasion, and a great crowd was gathered to pray for deliverance.

The Theotokos did indeed protect the city. The Russian invasion was repelled. Saint Andrew’s vision was made known, and a feast commemorating the event came to be celebrated in Constantinople each year. It came to  celebrate her overall protection of the Church and her people.

And to this day the whole Orthodox Church celebrates the Feast of the Protection of the Theotkos on October 1. Oddly, the Russians make more of it than do the Greeks!

for taking time to pray. You are a fool for spending a Sunday morning in church (under normal conditions), instead of sleeping in or going out to a nice breakfast. Above all you are a fool for wasting your good money on church and on the needy, when you could be buying something for yourself. That’s what the secularist would say, does say. But you know why. You also are called to be a fool for Christ.

A Troparion/Apolytikion for Saint Andrew the Fool

For Your sake, O Christ, Your servant Andrew became a fool on earth. He heard the Apostle Paul proclaiming, “We are fools for the sake of Christ’”  As we now honor his memory we pray You to save our souls.

Next Week and maybe the following week, too: Why Christianity is shrinking in America – an amateur analysis