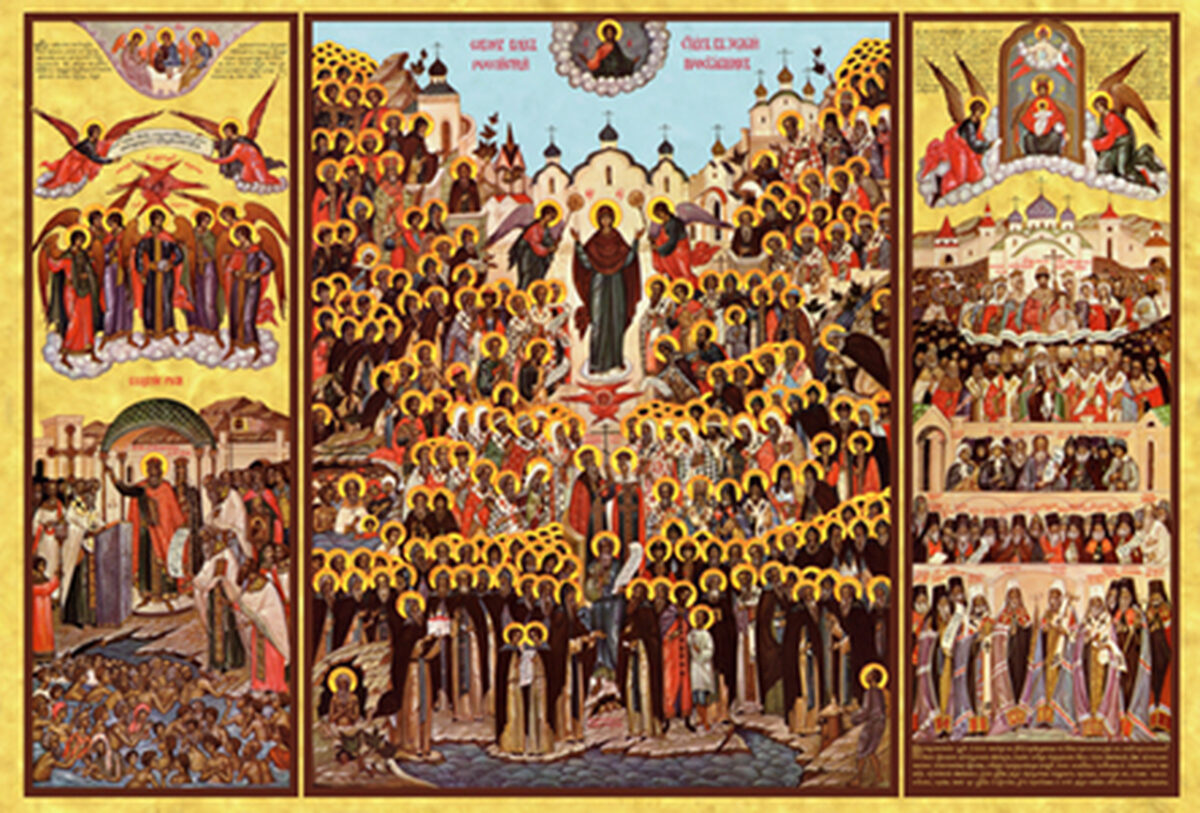 I mean, just look below at the Saints on the Orthodox calendar for today Friday June 12 from Orthodox Wiki. Almost all of them are monks, hermits, bishops, royalty. God bless and reward them all. But why are there no “ordinary” people? We’ll come to that. Don’t go away..

But first today’s Saints, as always, are an interesting bunch, well worth learning about: So many of them!

Push the blue buttons above if you wish, but don’t forget to shift into reverse and come back to this Post.

Reading about the Saints of the day is an easy way to learn the various ways of holiness, and also Church history. For example, I just Googled three of the above whom I didn’t know: 1  Saint Onouphrios the Great left, a well educated young man who left for the Egyptian desert and lived alone for seventy years. He was discovered only when an angel sent another monk before his death to bury him. After that: miracles! God can call people to do, um… eccentric things, shall we say? We don’t all have to be conventional.

2 Saint John the Soldier, pictured ‘way above, conscripted by the apostate Emperor Julian (who had abandoned Christ) to kill Christian prisoners. Instead he fed and ministered to them, and was himself sentenced to death. He teaches us “Charity above all”. He was saved when Julian was killed in battle.

3 The Hieromartyr Eskil was an eleventh century missionary from Christian England to the wild pagan Swedes who killed him. He was Bishop of the city of Tuna, which is still named after him: “Eskilstuna”. “Go into all the world…” How cultures can change – like the Swedes!

But again: why no school teachers, doctors, nurses, truck drivers, homemakers, farmers…? In fact (as usual) there aren’t even any priests listed. Why is this so?

Not yet. First, we need to do some background work.

What makes a Saint?

We Orthodox honor All the Saints this coming Sunday, the Sunday after Pentecost.

Western All Saints Day. is November 1, “Christianizing” a pagan commemoration of the dead.

But the purpose of our Eastern All Saints Day is theological. The Holy Spirit came to create Saints, to make people holy.

So who is a Saint? By the original Scriptural definition, we all are.  We are the holy people of God. When we were baptized we were set apart for God, made holy, sacred, sanctified. “Do you not know”, Paul wrote, “that your bodies are temples of the Holy Spirit, who is in you, whom you have received from God?”

This is reflected in the Divine Liturgy. Just before we receive the Holy Eucharist, the priest lifts up the Holy Bread and says “The holy things are for the holy.” * “The holy things” are the blessed

Bread and Wine, the Body and Blood of Christ. “The holy” are you and me – we who are the holy people of God.

In that sense all Christians are Saints.

How many of these official Saints are there? Many. Today has a fairly typical number. Count the  number of Saints ‘way above, and multiply by 365.

How are people declared to be Saints? The Roman Catholic Church has a fixed formal process for declaring a person a Saint. It requires a certain number of miracles. Someone is appointed to play the “devil’s advocate” to discover flaws in their lives. The person must first be declared “Blessed”, then in time “Saint”.

Most Protestant churches don’t recognize Saints, though Anglicans and Lutherans have official commissions which pick out people they deem worthy of commemoration.

However, in the Orthodox Church being recognized as a Saint just sort of happens. As with all things Orthodox, it begins with the people who remember a person’s great holiness and love, and so on the day of their deaths, they celebrate the Divine Liturgy to commemorate them and pray for them. Sometimes their holiness was self-evident: martyrs who gave up their lives rather than give up Jesus.

Or take Saint Nicholas of Myra, where people not only remembered his great goodness, but then soon after his death myrrh began to stream from his body (as it still does) and there were many miracles (as there still are), and devotion to him spread through the world. Did the Orthodox Church have to officially declare him a Saint? No.

With others, such as those on today’s list, their names were recorded by their cities or dioceses or monasteries – like John, Andrew, Heraclemon, and Theophilus, Hermits of Egypt, who otherwise would surely have been forgotten. It was natural that a Blessed Princess like Anna of Kashin was remembered. Right

Some were little known during their lifetimes, but miracles began after their deaths and have continued. That is how Saint Nektarios of Aegina, who died in 1921, has

become one of the most popular Saints of recent times. It took till 1961 for him to be officially “canonized” by the Patriarch of Constantinople, but the Orthodox people had already long known he was a Saint and treated him as such. Icons of Nektarios were hanging in Orthodox churches long before the Patriarch got around to it.

Those are the well-known Saints.

Now at last to the question: “Why aren’t there any Saints like me?” But there are! There are!

These are the millions of “ordinary” Saints whose names have been forgotten – ordinary except for their holiness. The many many thousands of anonymous Christians martyred in Communist countries. Right: the “New Martyrs of Russia” And (not to point to any one person in particular, only to point out possibilities) Christian teachers who have given everything they have for their students, even while others were running them down. Christian immigrants who have worked two or three jobs in a culture that is foreign to them, so that their children can go to high school and college. Christian soldiers who have served their countries faithfully (and some have died) – no matter which country, so long as they have served in sincerity. Christian health care providers who even now take their lives into their own hands (and some die) in service of those who are ill. Christians who give their private lives over to prayer, quietly accomplishing miracles for others which no-one except Jesus ever knows about. Christian restauranteurs who today instead of closing down during the Pandemic, stay open and feed the needy. And… and… and… Now, I’m not suggesting that all people such as I named above are Saints – except the Holy Martyrs, of course. But surely some of them are well on the way. They are the “ordinary” Saints  whose names are not well known now, or who will not be remembered for long on earth, or whose sanctity has been known only to a few, or perhaps only to God. .

So are there Saints like us? Yes. A multitude of them – and these are the Holy Ones we honor on the Sunday of All Saints.

Have you ever known a Saint? Possibly. But probably you didn’t know it. Some people we’re pretty sure are not saints! but we shouldn’t waste God’s good time trying to judge that. Some people may try to appear to be Saints but are not. Some people may be Saints but try hard to hide it, and we never know. In my time, I have known three people who I think perhaps were Saints. There was something indefinable that shone about them – no, it was Someone who shone through them. I don’t think they knew it. (None of them, by the way, were Orthodox.) But only God knows. I don’t. But I will pray for them as long as I live.

But will we be remembered on earth? Of course not. Not even the great Holy Ones among us will be remembered. Not here.

That’s just the way it is, unsettling though it is to think about it. I remember well my grandparents, born in the latter 1800s. (My Grandpa Fred was born in 1867, two years after the end of the Civil War!) Of my great grandparents I have only a couple of pictures and stories. When I am gone, almost all of that will go with me. Given a hundred years or so, there will be nobody alive on earth who knew you or me. And after that… only a fading tombstone, or some old pictures or images, and people will look at them and say, “I wonder who that was.” There will be no “Memory eternal” here, dear ones.

Well, if the world survives and the internet endures, perhaps in the year 2120 somebody will read these words I write now. But they will not remember me.

But God will remember us all. In His Kingdom we will never be forgotten. With Him, our memory will be eternal.

And in His Kingdom, all the Holy Ones forgotten or unknown on earth will be forever remembered and honored.

A Reading from C.S. Lewis

In Lewis’ imaginative novel The Great Divorce, the speaker is in the “hinterlands” of Heaven – a great light from the Land Beyond hangs over the place – and he sees a procession: “First came bright Spirits, not the Spirits of men, who danced and scattered flowers. Then, on the left and right, at each side of the forest avenue, came youthful shapes, boys upon one hand, and girls upon the other. If I could remember their singing and write down the notes, no man who read that score would ever grow sick or old. Between them went musicians: and after these a lady in whose honour all this was being done… I remember the unbearable beauty of her face. “Is it?…is it?” I whispered to my guide.

“Not at all,” said [his Scottish guide]. “It’s someone ye’ll never have heard of. Her name on earth was Sarah Smith and she lived at Golders Green.” “She seems to be…well, a person of particular importance?” “Aye. She is one of the great ones. Ye have heard that fame in this country and fame on Earth are two quite different things.” “And who are all these young men and women on each side?” “They are her sons and daughters.” … “Every young man or boy that met her became her son – even if it was only the boy that brought the meat to her back door. Every girl that met her was her daughter.”…

“And … What are all these animals? A cat – two cats – dozens of cats. And all those dogs…why, I can’t count them. And the birds. And the horses.” “They are her beasts.”… “Every beast and bird that came near her had its place in her love. In her they became themselves. And now the abundance of life she has in Christ from the Father flows over into them. … already there is joy enough in the little finger of a great saint such as yonder lady to waken all the dead things of the universe into life.”

Week after Next: Apostolicity