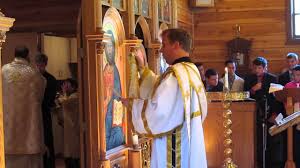 But before we get started:

Two years ago for the feast of the Presentation of Christ in the Temple (February 2), I

wrote an article “The Groundhog Who Stole Candlemas” which I note that many people are reading this year. (We bloggers know many secrets about you…) So I went back and read it again to see why, and if I do say so myself… Well, it’s worth it if only to see the video of the Mayor of Sun Prairie, Wisconsin being bitten in the ear by a groundhog. If you want to check it out, it’s Post 49. (I can’t believe we’re up to Post 165 already.)

Some have asked what is an easy way to locate past Posts. The best I’ve found is this: Google (or whatever search engine you prefer) “Ancient Faith Blogs Father Bill” and then you can easily back to the Post you’re looking for by number. Or if you know part of the title (for example “Groundhog”) add that to the above, and it will take you directly there.

Now to the business at hand:

For the full text of the Divine Liturgy, try  https://www.goarch.org/-/the-divine-liturgy-of-saint-john-chrysostom

In Posts 151 and 152 we covered the Proskimidia, the Priests’s Preparation for Liturgy. In the past two weeks we talked about Personal Preparation for attending Divine Liturgy, and The Meaning of the Liturgy.

The Order of the Divine Liturgy

Have you ever noticed? that when we come to Divine Liturgy we actually get three services, not just one. I think most Orthodox don’t pay much attention to the order of our services – we just accept them as they are and proceed to “use” them to worship.

1 Those who arrive on time (… … …) will see that the Liturgy begins with the Priest’s proclamation “Blessed is the Kingdom of the Father and of the Son and of the Holy Spirit”, and then come a Litany and a series of hymns and prayers.

2 This is followed by the Little Entrance right, when the clergy enter formally into the Altar area as if the service is just beginning, as if we haven’t already been worshiping for ten minutes.

3 Then comes the Great Entrance, when the clergy formally enter the Altar again, as if we’re starting all over again.

And indeed we are! For originally these were three separate services. Let’s start at the end and work back.

Part Three is called the Anaphora (αναφόρηση) which means the  “offering” – when we offer the Holy Gifts, the Bread and Wine, to the Father “on behalf of all and for all”.

Parts One and Two together are called the Pro-Anaphora, which means that which comes before the Anaphora. This is what we’ll begin to talk about today. For clarity I’m going to call Part One…

So when does the Divine Liturgy begin? Not when many people think it does. At least in our Greek/Antiochian practice *, just before Divine Liturgy we sing the last hymn of Sunday Orthros/Matins, namely the Great Doxology (“Glory be to thee who hast shown us the Light…”). At that point in most churches lights are turned up, candles are lighted, bells are rung, the people are censed, and it certainly seems as if the Liturgy has begun. Wrong! It is only after this, when everything settles down, that the Divine Liturgy commences. Just so you know. Here is the order of this Pro-Pro-Anaphora:

1   It is now that the Priest proclaims “Blessed is the Kingdom of the Father and of the Son and of the Holy Spirit”, while he lifts the Gospel Book and with it makes the sign of the Cross over the Altar table. Right Orthodox worship services always begin with an ascription of praise to God. For most, it’s “Blessed is our God always, now and ever and unto ages of ages”. But only the Divine Liturgy begins in this way – for, as we said last week, the Liturgy is our journey into God’s Kingdom, and it is the Holy Gospel of Our Lord Jesus Christ which leads the Way, the Way of the Cross and the Resurrection.

2  The Deacon (if the church has one, otherwise the Priest) begins the Great Litany (“Great Ektenia”): “In peace, let us pray to the Lord”. All major Orthodox services have a Litany at this point. It has always seemed right to begin our worship with intercessory prayer and a plea to God for help.

If you follow the Divine Liturgy closely, you’ll note that the Priest addresses most of his words to God. But the Deacon’s chief role throughout the Liturgy is to speak for the people: “In peace, let us pray to the Lord…” This is why he often goes back and forth between the Altar and the peoples’ side of the icon screen. (A little non-Orthodox girl visiting our parish pointed at our Deacon and asked, ‘Why does he have to do all the work?”) Left: A Deacon at work.

The peoples’ response in our many Litanies is “Lord, have mercy” (“Kyrie eleison”, “κύριε ελέησον”). Visitors to Orthodox churches often remark on how often they hear this. We need to stop and talk about that – because the English word, “mercy” is not adequate. It suggests chiefly “deliverance from punishment” – “Mercy, Master!” But “eleison” derives from the ancient Greek word for “oil”: “eleos/έλεος. It was the popular cry addressed to kings and rulers as they passed by. It meant something far more positive. It is a plea to “pour out upon us Your kindness, Your unction, Your saving love”. There is no good English word for it. For myself, I think we should put this response back into the Greek and keep it there.

3 Then come three Antiphons or hymns. What ever is the reason for them? It’s because long ago in Constantinople, on feast days everybody used to go in procession from the great church Hagia Sophia to Divine Liturgy at the church of the Saint being celebrated – that is, on Saint Ignatius’ Day to Saint Ignatius’ Church, and so on. On the way, to keep people occupied in a spiritual manner, they sang  “Antiphons”, with the people taking the refrain, a cantor singing the verses. * When this practice ceased (why? I don’t know) the hymns were so popular that nobody wanted to give them up, so they became a sort of introduction to the Pro-Anaphora – and so they still are.

Here we also sing another hymn “Only begotten Son and Word of God…” which seems oddly out of place. It was added by the Emperor Justinian in the Sixth Century, to safeguard the doctrine of Christ’s Incarnation. And so it still does.

Why has the Church kept this seemingly anachronistic “Pro-Pro-Anaphora”? The real reason, as we said last week, is that we Orthodox almost never throw anything out! It’s part of our “grandma’s attic” of the Orthodox Church, retained because it ties us to our early heritage. In practice it provides a sort of spiritual “warmup exercise” for the more important things to come. As you know, the Church leads us into everything g r a d u a l l y , whether it’s the Liturgy or Great Lent or Salvation itself.

It seems to me that this “Introduction to the Anaphora” also provides people with another reason to come late, waiting for the “action” to begin. Hmmm…

And so finally we come to the Real Thing – the Little Entrance when anciently the Pro-Anaphora began.

Next Week: The True Pro-Anaphora

Week after Next: The Pre-Lent Epistles – The Church prepares us for the Great Fast