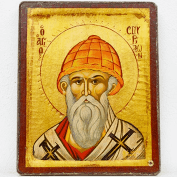 So I hope he won’t object if today we tell the story of one of his contemporaries, Saint Spyridon whose feast day is December 12.

Spyridon was a simple shepherd on Cyprus, with little formal education but humble of heart and holy, who became a Bishop, and who after his death took to traveling. If you haven’t heard about Walking Saints, prepare yourself.

Born on the island of Cyprus about the year 270, he was married and they had children, though we know the name of only one, their daughter Irene.

Spyridon was ordained to the Priesthood and so became shepherd of two kinds of sheep – both his wooly animals and also Christ’s “rational flock”, as we are called in many Orthodox texts. * In his icons I think he is always shown with the peculiar woven “basket” headdress which shepherds wore at the time, for some reason – to indicate that he always retained his early pastoral simplicity.

Not to mention his sheep! All his life he also continued to shepherd his four-legged flock. Right: 21st century Cypriot sheep

Last week I told you the story of how Spyridon once came home to find thieves stealing his sheep. After trying to persuade them to turn to an honest life, he let them go and gave each of them a sheep saying, “so all your hard work will not have been in vain”.

Another story: During Lent a visitor came to see Saint Spyridon, famished from his long journey. Spyridon offered him the only food he had, some salted dried pork left over from before Lent. The visitor refused: “No, I can’t eat meat during Lent!” So Spyridon took some of the pork and ate it himself, then gave it to the visitor who now felt free to eat.

This gives you a picture of Saint Spyridon. Though in those early days Bishops could still be married, it wasn’t till after his wife’s death that Spyridon became Bishop of Trimythous (modern-day Tremetousia, in a part of Cyprus still under Turkish control). In the year 325 he attended the First Ecumenical Council of Nicaea. (See Blog Posts 14 and 15.) This is the same Council where Saint Nicholas is said to have punched out the heretic Arius and so got himself kicked out of the Council and sent home.

Well, I can understand how Arius could have driven an Orthodox person up the wall. But – sorry, Saint Nicholas – I think Saint Spyridon took a better approach. At the Council, he listened to the long words and erudite arguments of an Arian philosopher, then confronted and confounded him with his simple and heartfelt words. *

Spyridon converted other Arians by showing them how God can be Three in One. He took a brick or potsherd or some such thing in his hand and said, “This one brick is composed of fire, water and earth, completely united.” It is said that suddenly as he was speaking, the brick burst into flame (fire), water dripped to the ground, and only the clay remained. Some of his icons portray this miracle. That is how Spyridon became patron saint of potters.

As you can see, Bishop Spyridon had received the gift of working miracles. During a drought he prayed and it began to rain. He could heal people and cast out demons with a single word. When he got back from Nicaea, a woman told him that she had given her daughter some jewelry for safekeeping, but her daughter had died and she couldn’t find the jewelry anywhere. Spyridon went to her daughter’s grave, spoke with her (!) and then went straight to where the jewelry was.

One day at Vespers only Bishop Spyridon, his Deacon and a couple of readers were in church. People passing by heard gorgeous music, obviously the work of a great choir, but when they looked into the church, they saw only Bishop Spyridon and his assistants. *

The Troparion/Apolytikion for Saint Spyridon speaks also of his turning a snake into gold. After much searching, I finally found that strange story: A poor man told Spyridon that he had no money for food, when just then a snake slithered by. Spyridon changed it into gold pieces so that man could buy food.

Troparion for Saint Spyridon: You were a champion of the First Council and a wonderworker, our God-bearing father Spyridon. You spoke to one dead in the grave and transformed a serpent into gold. While chanting your holy prayers you had angels serving with you! Glory to Him Who gave you strength! Glory to Him Who granted you a crown! Glory to Him Who through you grants healing to all!

Saint Spyridon died about the year 350. The people of Cyprus honored his memory and venerated him, as they do to this day. In the mid Seventh Century, in order to protect them from the Saracen threat, his relics were removed and taken to Constantinople. His body was found to be incorrupt and gave off a distinct fragrance of basil, the herb which covered the field in which Saint Helena found the True Cross. His relics remained in Constantinople in honor for eleven centuries.

Then, just before the fall of The City in 1453, a parish priest Giorgios Kalokhairetes spirited them away through Serbia and finally to safety on the island of Kerkyra, usually called Corfu, off the west coast of Greece. There Saint Spyridon’s miracles continued. In fact it could be said that there, more than a thousand years after he died, he really got to work! On Corfu a church was built in his honor, with the highest tower in the region. There his relics still lie – except on occasion. His body is incorrupt to this day, showing some signs of age (not surprising after over seventeen centuries!) but it is still flexible, and some say it still holds body temperature.

Some of his miracles:

In 1529 (?) a plague fell on Corfu just at the beginning of Holy Week. The desperate people gathered in Saint Spyridon’s Church to pray for help. Some of the sick had visions of Spyridon healing them. For three nights unexplainable lights were seen in the tower of the church. By Palm Sunday the plague was inexplicably gone, with few fatalities.

In 1553 there was famine on Corfu. The people had no idea what to do except pray to Saint Spyridon, so they did. A ship carrying wheat suddenly docked in the harbor. The captain of the ship said he had seen Saint Spyridon who directed him to change his plans and go to Corfu.

In 1673 plague hit again. Again people went to the church, begging help from the saint. Again lights were seen in the tower. Some said they saw the figure of Saint Spyridon chasing something like a black ghost or winged creature, and when it reached the fortress of Corfu, he beat it up with the Cross, leaving a mark in the stone wall which is shown to tourists today. Be that as it may, again the plague suddenly was gone. When the Turks invaded the island in 1716, advancing Turkish soldiers claimed they had been terrified by the sight of a monk flying at them, threatening them with a flaming sword. In any event they fled and the siege which had lasted for twenty two days was over. Corfu was saved. The Turks didn’t know who the “monk” had been, but the people of Corfu did. Corfu was the only part of Greece never conquered by the Ottomann Turks.

There were more miracles, but probably these  are sufficient to make the point.

Five times a year Saint Spyridon’s body is taken in procession through the town. I read that often there are a few healings.

But it seems he gets around even more than that. Spyridon is apparently one of our Walking Saints. There is another that I know of – Saint Dionysios of Zakynthos, also off the west coast of Greece. And maybe another from the same area, but I can’t find the account now, so I won’t mention him.

(Does anybody know about this? or about any more?)

Regarding Saint Spyridon: His slippers get seriously scuffed up so often that they have to be replaced often! This is well documented. His coffin has a door at the end, to make it easier to remove them. They say he walks about town from time to time, checking things out. Twice a week, I believe, the door is opened, so that people may venerate his feet. On his feast days, great lines of pilgrims gather there.

Besides December 12, his relics are carried around the town to celebrate his major miracles: 1) Palm Sunday, in celebration of his saving Corfu from the first plague. 2) Holy Saturday, for his saving Corfu from the the famine. 3) August 11, in commemoration of the defeat of the Turks. 4) First Sunday in November for the end of the second plague. As you can see above, these are not like our sparse religious processions in the United States. They’re more like our Fourth of July parades. But with Bishops. And with incense. And with the relics of a saint.

So, all told, this is one saint who really gets around!

Oh, and I almost forgot: From as far back as anyone can remember, Saint Spyridon’s right hand (for reasons unknown) has been separated from his body. So guess what? Spyridon’s hand also goes traveling. Among other places, to Russia, Rome and, in October 2017, the United States.

Because of all his miracles, Spyridon is titled “The Wonderworker” – along with Saint Nicholas of Myra and Saint Nektarios of Pentapolis and seventy-four other saints. (We’ve had a lot of miracles in the Orthodox Church. Still do) For obvious reasons, he is the patron saint of Corfu.

Many boys on Corfu are named Spyridon. If you meet a man called “Spiro”, almost certainly his family is from Corfu. Likewise with the much less common female name “Spyridoula”. A church named Saint Spyridon was very likely founded by people from Corfu.

And that is the story of Saint Spyridon – with too many side comments from me. If you can find a more interesting and fascinating saint than Saint Spyridon of Trimythous, please tell us who it is.

Next Week: The Prophet Daniel, and the Three Young Men in the Fiery Furnace

Week after Next: Another December Saint – The Hieromartyr Ignatios of Antioch