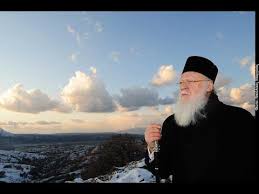 The Way We Were

Cuyahoga River caught fire that protecting the environment became a popular cause in America, supported by almost everyone. Today many of our lakes, rivers and streams are cleaner. (I think.

Cedarburg’s picturesque Cedar Creek is just now being dredged so that people can again eat fish from it. And Lake Michigan has an ongoing problem with smelly algae.) When I was a boy, the shoulders

of our streets and highways were covered with litter. No kidding, they looked like this. Now most are beautiful. We’ve made progress. But recently environmentalism has for some reason become a dirty word in some circles.

His All-Holiness Bartholomew, 270th Archbishop of Constantinople and Ecumenical Patriarch, has spoken so clearly to the subject that he is nicknamed the “Green Patriarch”. He speaks not out of a secular ethic but from a deep understanding of Orthodox theology. Bartholomew has asked Orthodox to keep September 1st each year as a day of prayer for the protection of the natural environment. We’re a bit late here for the date but not for the subject.

These quotes from Bartholomew’s many writings and speeches on the subject are taken from Father John Chryssavgis’ book Cosmic Grace – Humble Prayer: The Ecological Vision of the Green Patriarch Bartholomew. Both the Patriarch and Dr. Chryssavgis, by the way, have written interesting books on many subjects, most easily available from Amazon. The Way We Should Be: Patriarch Bartholomew on the Environment

“If human beings were to treat one another’s personal property the way they treat the natural environment, we would view that behavior as anti-social and illegal. We would expect legal sanctions and even compensation. When will we learn that to commit a crime against the natural world is also a sin?”

“We are treating our planet in an inhuman, godless manner precisely because we fail to see it as a gift inherited from above. Our original sin with regard to the natural environment lies in our refusal to accept the world as a sacrament of communion, as a way of sharing with God and neighbor on a global scale. It is our humble conviction that divine and human meet in the slightest detail contained in the seamless garment of God’s creation, in the last speck of dust.”

“It should not be fear of impending disaster with regard to global change that obliges us to change our ways with regard to the natural environment. Rather, it should be a recognition of the cosmic harmony and original beauty that exists in the world. We must learn to make our communities more sensitive and to render our behavior toward nature more respectful. We must acquire a compassionate heart – what St. Isaac of Syria, a seventh century mystic once called “a heart that burns with love for the whole of creation: for humans, for birds and beasts, for all God’s creatures.”

“The fundamental criterion for an ecological ethic is not individualistic or commercial. It is deeply spiritual. For the root of the environmental crisis lies in human greed and selfishness. What is asked of us is not greater technological skill, but deeper repentance for our wrongful and wasteful ways. What is demanded is a sense of sacrifice, which comes with cost but also brings about fulfillment. Only through such self-denial, through our willingness sometimes to forgo and to say “no” or “enough” will we rediscover our true human place in the universe.”

“This sacrifice for the sake of sharing means learning to give, and not simply to give up. It is learning to share and to connect with others and with the natural world. It is a way of loving, of moving gradually away from what I want to what God’s world needs. It is liberation from fear, greed and compulsion. It is regaining a sense of wonder, being filled with a sense of goodness, seeing all things in God, and God in all things.”

“If we are guilty of relentless waste, it is because we have lost the spirit of worship. We are no longer respectful pilgrims on this earth; we have been reduced to careless consumers or passing travelers. This spiritual vision of worship guides us to a life that sees more clearly and shares more fairly, moving away from what we want individually to what the world needs globally. Then, we begin to value everything for its place in creation and not simply its economic value to us, thereby restoring the original beauty of the world, seeing all things in God and God in all things.”

“We have been commanded to taste of the world’s fruits, not to waste them; we have been commissioned to care for the world, not to waste it. When Christ fed the multitudes with a few loaves and fish on a hill in Palestine, he instructed his disciples to “gather up all of the remaining fragments, so that nothing may be lost.” (John 6.12) This instruction should serve as a model in a time of wasteful consumption, where even the refuse of affluent societies can nourish entire populations.”

“It is a qualitative element of our faith that we believe in and accept a Creator who fashioned the world out of love, making and calling it “very good.” Tending to and caring for this creation is not a political whim or a social fashion. It is a divine commandment; it is a religious obligation. It is no less than the will of God that we leave as light a footprint on our environment.”

“It is never too late. God’s world has incredible healing powers; and human choices can change the tide in global warming. Within a single generation, we could steer earth toward

our children’s future. With God’s blessing and help, that generation can begin now. For the first time in the history of our world, we recognize that our decisions and choices directly impact the environment. It is up to us to shape our future; it is up to us to choose our destiny. Breaking the vicious circle of ecological degradation is a choice with which we are uniquely endowed, at this crucial moment in the history of our planet.”

“Ecology cannot inspire respect for nature if it does not express a different worldview from the one that prevails in our culture today, from the one that led us to this ecological impasse in the first place. What is required is an act of repentance, a change in our established ways, a renewed image of ourselves, one another and the world around us within the perspective of the divine design for creation. To achieve this transformation, what is required is nothing less than a radical reversal of our perspectives and practices.”

“Poverty is not caused by the lack of material resources. It is  the immediate result of our exploitation and waste. There is a close link between the economy of the poor and the warming of our planet. Conservation and compassion are intimately connected.

The web of life is a sacred gift of God – ever so precious, yet ever so delicate. Each of us dwells within the wider ecosystem; each of us is a part of a larger, global environment. We must serve our neighbor and preserve our world with both humility and generosity, in a perspective of frugality and solidarity.”

“Climate change is much more than an issue of environmental preservation. Insofar as human-induced, it is a profoundly moral and spiritual problem. To persist in our current path of ecological destruction is not only folly. It is suicidal because it jeopardizes the diversity of our planet. Moreover, climate change constitutes a matter of social and economic justice. For those who will most directly and severely be affected by climate change will be the poorer and more vulnerable nations (what Christian Scriptures refer to as our “neighbor”) as well as the younger and future generations (the world of our children, and of our children’s children).”

“Indigenous peoples throughout the world are the stewards and guardians not only of the forests and the seas, as well as of a vast store of knowledge about the natural world, which

they regard as the “library of life.” They know the properties and potential uses of every living thing around them. The rest of the world is sometimes jealous of that knowledge, and indigenous peoples are understandably, and often justifiably, cautious about sharing it.”

“The word “ecology” contains the prefix “eco,” which derives from the Greek word oikos, signifying “home” or “dwelling.” How unfortunate, then, and indeed how selfish it is that we have reduced its meaning and restricted its application. This world is indeed our home. Yet it is also the home of everyone, just as it is the home of every animal creature and of every form of life created by God. It is a sign of arrogance to presume that we human beings alone inhabit this world. Moreover, it is a sign of arrogance to imagine that only the present generation enjoys its resources.”

“Whenever we narrow religious life to our own concerns, then we overlook the prophetic calling of the Church to implore God and invoke the divine Spirit for the renewal of the whole polluted cosmos. For, the entire world is the space within which this transformation is enacted. When we are transformed by divine grace, then we discern the injustice in which we are participants; but then we will also labor to share the resources of our planet; then, we realize that eco-justice is paramount — not simply for a better life, but for our very survival.”

“As Orthodox Christians, we use the Greek word kairos to describe a moment in time, often a brief moment in time, which has eternal significance. For the human race as a whole, there is now a kairos, a decisive time in our relationship with God’s creation. We will either act in time to protect life on earth from the worst consequences of human folly, or we will fail to act. May God grant us the wisdom to act in time. Amen.”

Next Week: Introduction to an occasional series on “Orthodoxy and Other Faiths”. When will get back to traveling again? Soon. But I had only so many trips, and if we use them all up now, where will we be? Stuck at home, that’s where.